China may scrap its notorious birth restrictions entirely as the leadership belatedly realizes that the country needs more babies. But getting the Communist Party out of the bedroom will not be enough to address China's demographic challenges, an FT Confidential Research survey of urban consumers shows.

Increased spending on social services may convince some couples to have more children. But global development trends suggest China's leaders will need to grapple more forcefully with the implications of a rapidly aging society.

A loosening of the one-child policy in 2016 -- an auspicious year in the Chinese calendar to have a child -- contributed to a bump in the number of babies born. But last year's drop was the biggest in 16 years. Local government reports suggest more steep falls this year, including a 23% year-on-year drop in Zibo, a city in eastern Shandong Province, in the period from January to May. From 2016, most couples were permitted to have up to two children. However, alarmed at the fall in national fertility, the government may now be moving to lift birth limits entirely, four decades after their controversial introduction. The National Health and Family Planning Commission, the sometimes-brutal enforcer of the one-child policy, has been subsumed within a new national health agency and officials are reportedly considering codifying the removal of all restrictions. In doing so, the government hopes to address China's shrinking labor force and rising dependency ratio. A baby boom is unlikely to follow, however. Nearly 60% of the 405 respondents to our survey of urban residents of childbearing age said associated costs were the biggest factor limiting their decision to have children. Just 4% cited the influence of policy restrictions, a third of the number who said their biggest constraint was the cost of housing. Among those who already have one child, just 6% cited government restrictions. Our survey reflects the profound shifts in Chinese society that have resulted from breakneck economic development. Chinese people are marrying later, having children later and getting divorced more often. Our survey respondents, all of whom live in urban areas, are grappling with rising living costs while government spending on social services has not kept up. Smaller families mean couples are spending more on education for their only child; a 2017 HSBC survey found 93% of Chinese parents had spent money on extra tuition, by far the highest proportion among the 8,000 parents surveyed across 15 countries and territories.

Economic opportunity is also taking its toll on household size, reflected in the 21% of respondents who said their professional commitments were the main obstacle to having children. This rises to 29% among respondents from households making more than 300,000 yuan ($43,300) a year. As we have previously highlighted, Chinese women in the workplace face routine discrimination -- often in flagrant violation of labor laws -- regarding their willingness to have children.

Economic opportunity has brought other pressures that restrict the choice to have one or more children. The big driver of the economy has been a surging housing market, spawning an affordability crisis in the country's largest cities. Men typically need to provide an apartment for an offer of marriage to be accepted, while having more than one child means couples need to think about making expensive upgrades to bigger homes.

On current trends, the distribution of China's population by midcentury will look like Japan's today. Japan now has the world's highest old-age dependency ratio at 45.6%. The ratio of China's elderly-to-working age population will hit 43% by 2045 from 15% now, according to United Nations forecasts. 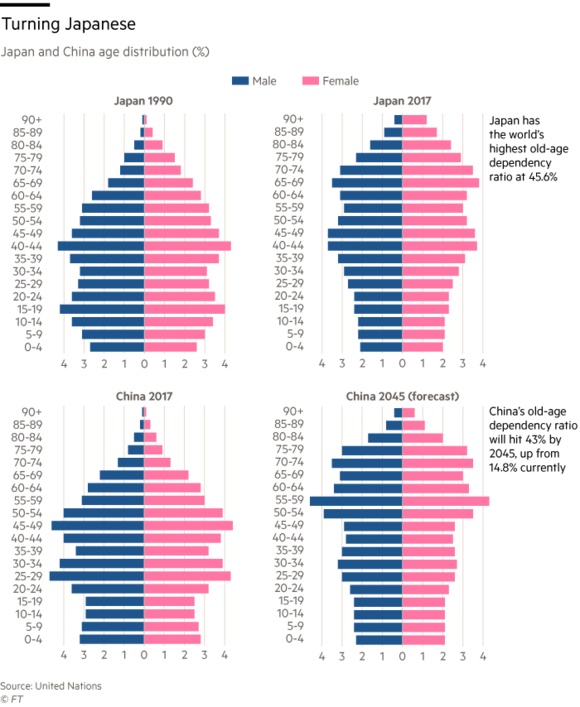 Simply removing legal restrictions on the number of children that couples can have is unlikely to change this trajectory. Among members of the Organization for Economic Cooperation and Development, a rise in public spending on families and children since the start of the century has not resulted in a significant increase in fertility rates. Germany has reversed its falling rate thanks to increased child-care provisions, while Japan's is also climbing again, but both countries remain far below the replacement rate. 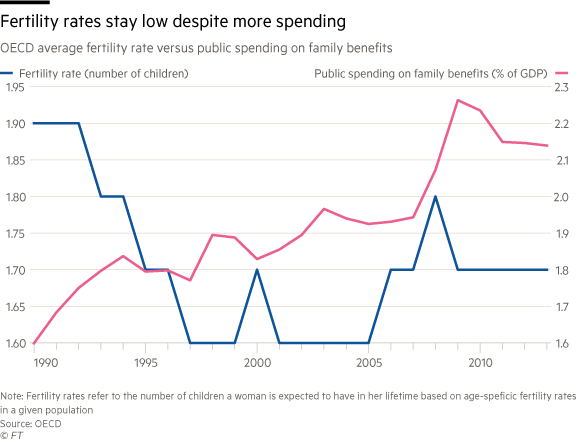 As the Chinese leadership moves slowly to address the country's demographic challenges, it is allowing local governments to experiment with incentives to convince couples to have more children. But there is still no confirmation that the two-child policy is to be lifted -- never mind central government guidance on how couples will be encouraged to have more children and the steps that the state may take to ease their cost pressures.

The government will have to move faster and more aggressively if it is to successfully counter the impact of a growing number of elderly. On its current path, China is expected to have an extra 200 million people over 65 years of age by midcentury, while the paucity of babies means the labor force is shrinking.