Hanoi's dependence on imported textiles will cause trade woes

Why Vietnam must do more than cut and sew A "Made in Vietnam" label is visible on a shirt in a display case in the lobby of President Donald Trump's Trump Tower building in New York, U.S.   © Reuters
FT Confidential ResearchOctober 10, 2018 13:30 JST | Vietnam
CopyCopied

Vietnam is on track to become the world's second-biggest exporter of textiles and clothing this year, but it is too soon to celebrate.

Most Vietnamese clothing exports are processed from imported high-value textiles. As the country's trade surplus with the US balloons, Vietnam will need to move up the value chain by developing homegrown textile manufacturing if it is to diversify into new markets and escape Washington's ire.

Textiles and clothing manufacturing have been key pillars of the Vietnamese economy since the country's "doi moi" economic reforms of the early 1990s. The sector has lured low-cost rural workers out of farms and into factories, helping generate a reliable stream of foreign exchange revenue.

Vietnam last year surpassed Bangladesh, Germany and Italy to become the world's third-largest exporter of textiles and clothing, shipping $36.9 billion worth, just below China and India. Exports of "Made in Vietnam" textiles and clothing expanded more than fourfold during 2007-17, and have increased at an average 15 percent annually over the past five years, according to the United Nations Conference on Trade and Development (UNCTAD). Vietnam is well on track to overtake India this year. Government statistics show exports grew 16.9 percent in January-August, twice as fast as in the same period last year.

Textiles and clothing are Vietnam's second-biggest export and its leading industrial employer. Despite rising labor costs, the sector remains highly labor-intensive, employing 2.7 million workers nationwide. That means 5 percent of the country's total labor force and 20 percent of its industrial workforce are engaged in producing textiles and clothing, according to the Vietnam Textile and Apparel Association (Vitas), a government-linked industry group.

The sector's remarkable export performance relative to other countries points to a combination of demographic and geographic advantages, as well as an openness in trade policy that gives Vietnam an edge over its competitors. The prospect of free trade agreements with the EU -- expected to be ratified this year -- and the original Trans-Pacific Partnership (TPP) led to a jump in foreign investment. About half of the $15.7 billion invested in Vietnam's clothing and textiles sector from overseas since 1998 was invested in the past five years, according to Vitas.

Despite the sector's notable gains, Vietnam still lacks credible textile manufacturing capacity. About 70 to 80 percent of the fabrics used to make clothing in the country are imported, mainly from China, while clothing production is mostly stuck at the low end of the value chain. This is the "cut, make and trim" phase where design and materials inputs are turned into a finished, packaged product.

Vietnam's government statistics bureau estimates that only a third of the value of finished goods from the textiles and clothing sector is generated domestically, with the rest consisting of imported materials. Although this is better than barely 20 percent in smartphones and electronics, it reflects the limited gains for local enterprises engaged in clothing manufacturing. 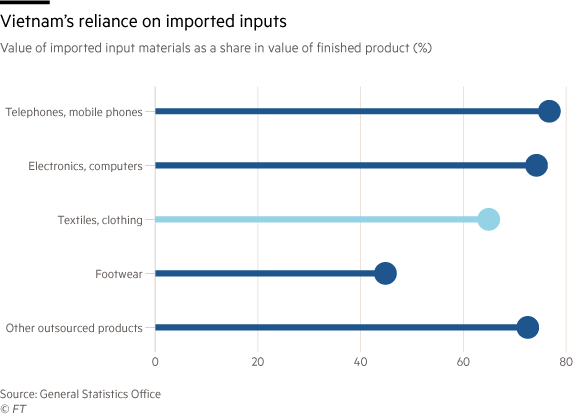 While investors are keen to open higher value-added factories to do weaving, knitting and dyeing, provincial governments are reluctant to approve them because of environmental concerns. Despite the promise of economic gains, local authorities worry about breaching national regulations.

Ultimately, Vietnam will need to localize production of input materials. Citing recent historical examples such as Guangdong, economists highlight the positive effects that textiles manufacturing can have in spurring industrialization. In any event, the margins of clothing suppliers at the lower end of the value chain will come under pressure as labor costs rise, forcing change.

But Vietnam also needs to move up the value chain if it is to diversify into overseas markets. The country currently sends nearly half of all of its textiles and clothing exports to the US.