A Hyundai Motor dealership in Seoul. Hyundai was one of the high-profile targets of the Chinese government's anti-South Korea campaign.   © Reuters
FT Confidential Research

Korean brands still under pressure in China despite warmer ties

Warming diplomatic ties between Beijing and Seoul have brought little relief to South Korean brands, which continue to struggle in the Chinese market, according to the latest consumer brands survey by FT Confidential Research.

The FT's survey of 2,000 households across China found the popularity of South Korean brands continuing to wane as competition from domestic companies intensifies (see chart). 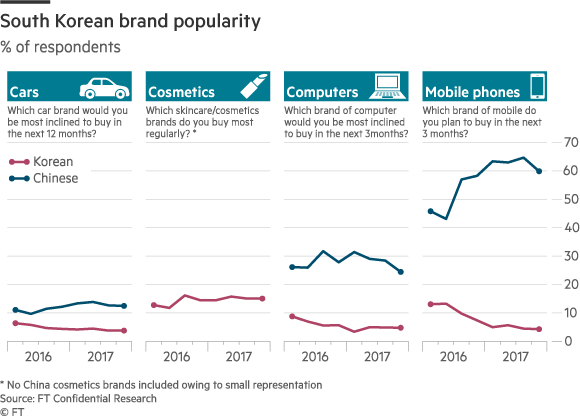 The end of a diplomatic stand-off that began in 2016 over deployment in South Korea of the U.S. Terminal High Altitude Area Defense missile system should remove uncertainty for some South Korean companies operating in China. However, their market position still leaves them vulnerable to lower-priced and increasingly potent domestic competitors.

In response to Seoul's agreement to deploy THAAD, Chinese authorities began intensifying pressure on South Korean business in the country and state media encouraged a consumer boycott of South Korean goods. South Korean business was disrupted, but the calls for a boycott were not successful. Chinese consumers do claim to shop patriotically: 62.5% of respondents to our survey said changes in China's relations with another country would affect their decision to buy goods from that country. However, they also said factors such as quality, brand and price are far more important than country of origin (see chart). The end of the stand-off came too late for Lotte Group, which, along with Hyundai Motor, was the most high-profile target of the government campaign. The chaebol corporate group, which was directly involved in the THAAD row after providing the land for its deployment, is trying to sell its supermarket operations in China after most of its outlets were closed by local officials citing safety or tax violations. However, Lotte had been struggling for years in China due to overexpansion and local competition.

Hyundai's China operations, too, were disrupted but the automaker's problems in China also go beyond THAAD. The company failed to adapt quickly enough to demand for small SUVs, resulting in a disappointing 2017 and a subdued outlook for this year.

Our brand data shows Hyundai's popularity being eroded by domestic challengers, although it did improve slightly among third-tier city residents, who generally have smaller budgets (see chart). Hyundai has partly countered falling sales with price cuts and has fast-tracked launches of small SUVs. With a sticker price of 129,900 yuan ($20,275), Hyundai's ix35 is aggressively priced against domestic rivals such as Great Wall's Wey VV5, which sells for 150,000 yuan. South Korean car sales -- mainly those of Hyundai and Kia -- showed signs of recovering toward the end of 2017. However, they may not spring back, as Japanese car sales did following protests in 2012, given the problems of domestic competition and inadequate product lines (see chart). Samsung Electronics was unscathed by the spat but Chinese consumers continue to favor either Apple at the top end of the market, or a growing crop of cheaper and increasingly high-quality domestic models. Strong reviews for Samsung's Galaxy S8 and Note 8 handsets did not stop the phone giant's popularity continuing to fall in China in the fourth quarter, with just 4.1% of respondents saying they plan to buy a Samsung, down from 4.8% in the first quarter of 2017.

Samsung has responded by giving its China operations more autonomy. The price of its upcoming S9 handset has not been made public, although reports say the Chinese versions will carry the lowest price tags globally, suggesting management is trying to win back those consumers who bought cheaper domestic phones. However, we do not think this will reverse the slide because the price gap is cavernous -- Samsung's S8 costs nearly 40% more than Oppo's R11s -- while the technology gap is quickly narrowing.

Although the popularity of Korean cosmetics brands has proven resilient, a ban on Chinese tour groups to South Korea has hurt sales via duty-free shops. This has reduced the profits of AmorePacific Group, the biggest South Korean name in the Chinese cosmetics market. However, its brand popularity among consumers improved in the fourth quarter, according to our survey, particularly among the over-25s. In the cosmetics sector, brand matters more than price. Cheaper Chinese cosmetics still lack the allure of those sold by Korean names, not to mention the French, Japanese and U.S. brands that dominate this market.