Philippine President Rodrigo Duterte speaks before the lawmakers during his first State of the Nation Address at the Philippine Congress in Manila in July 2016.   © Reuters
FT Confidential Research

Philippine President Rodrigo Duterte may have delivered on his promise to wage war on drugs and crime but another campaign pledge to cut income taxes, as part of a broader tax system overhaul, is struggling to get through the congress. That risks compromises which could threaten the government's infrastructure spending plans as well as rating agencies' views of the country's sovereign rating.

The Philippines has one of the highest top-tier personal income tax rates in the so-called ASEAN-5, at 32%. The Duterte administration has embarked on a comprehensive tax reform program that would not only lower this rate but would also increase others, such as an excise on fuel.

The government says tax reform is needed to help fund accelerated spending on infrastructure, which it believes will help deal with what it has called a "massive backlog" left behind by previous administrations.

The Department of Finance has divided the program into five separate tax bills. The first -- and the only one so far finalized -- deals with cutting the personal income tax rate to a maximum of 25%. Most Filipinos pay tax at this higher rate, which is levied on those with annual incomes above 500,000 pesos ($10,000).

The bill also proposes to increase a tax levied on oil companies, which they have said will be passed on to consumers at the pump, and a tax on vehicles, to be paid by manufacturers and importers.

Taken together, these measures would result in a net increase in tax revenue of about 149 billion pesos (see chart) -- equivalent to 0.9% of gross domestic product -- which the government could allocate to infrastructure spending. The net gain comes from the difference between losses of 139.7 billion pesos from lower income, inheritance and charitable giving taxes, and by gains of about 289 billion pesos from the higher oil and automobile levies, as well as expected improvements to tax administration and better prosecution of tax evaders.

The bill was put before congress last September and was intended to be passed by July this year. But deliberations have dragged and the congressional committee hearing the bill now admits the law may not be signed until October. Policymakers have admitted that lower-than-expected revenues from these tax reform efforts would affect infrastructure spending plans as early as next year.

Legislators will return from a one-month break in May and will have only another month to debate the bill before formally adjourning. We think the best-case scenario is for the bill to pass the lower house by June and get sent to the senate for approval as soon as the new session of congress opens in July. Any delay will open the way for compromises that may dilute the original revenue-generating potential of the bill.

Legislators are likely to push back on two fronts: by insisting on improvements to tax collection -- long a weak spot for the Philippines -- and by demanding that consumers are shielded from tax rises on fuel and vehicles.

In spite of being the fastest growing economy in the region last year, the Philippines has a relatively low tax collection rate (see charts). 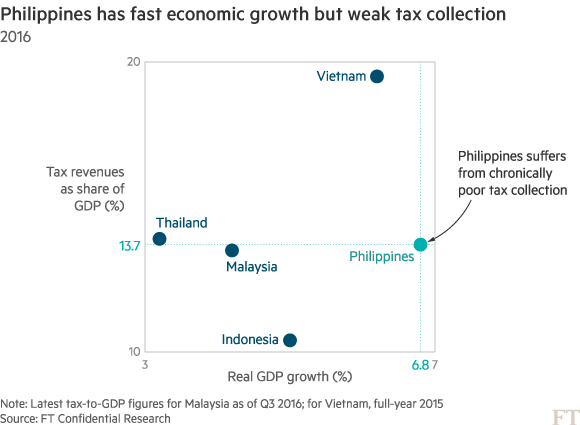 Members of congress say problems ranging from tax evasion, smuggling and manual filing of taxes that promote extortion among tax examiners will have to be addressed before any additional levies, or increase in existing levies, can be agreed.

The DoF has already climbed down in the face of legislative opposition, such as by agreeing to spread a one-time hike in the diesel levy over three years in order to shield consumers. While this would not affect prospective revenues coming out of the bill, we fear that more compromises are possible.

We believe any dilution to the tax reform could worry credit rating agencies, which have already expressed concern over the Philippines' weak revenue generation. Last September, Standard & Poor's kept its BBB investment-grade status for the country, with a stable outlook, but warned that it could lower the ratings if "there is a reversal of recent gains" in the government's fiscal position.

Moody's Investors Service, while yet to conduct its new assessment of the stable Baa 2 rating, said a month later that low state revenues were a "persistent credit challenge". The most recent evaluation was given by Fitch this month, when it kept the country's BBB- rating and positive outlook, but added that negative risks existed as far as the execution of the tax reform program was concerned.

This article was first published on Apr. 4 by FT Confidential Research.