Workers balance on steel beams as they work on an expressway undergoing construction in Manila, one of the Philippines government's infrastructure programs.   © Reuters
FT Confidential ResearchFebruary 4, 2019 14:54 JST | Philippines
CopyCopied

Even as the Philippine government celebrates a successful dollar bond sale, signs are emerging of a return to the bad old days when fiscal profligacy undermined the country's creditworthiness.

President Rodrigo Duterte's administration is likely to have breached its 3 percent limit on the fiscal deficit last year and is set do so again from next year until his term ends in 2022, as spending on infrastructure and social programs increases while tax revenues fall short.

In early January, the Philippines led emerging market issuance for 2019 with the sale of $1.5bn in 10-year dollar bonds paying interest of 3.75 per cent, 110 basis points over equivalent U.S. Treasuries and below the initial guide price of 130 points over Treasuries.

Dominguez's confidence may not last long. While the government's balance sheet remains healthy overall, with rising revenues and low debt, the hard-earned fiscal gains that won the Philippines its investment-grade credit ratings are at risk. Duterte's economic team took office in June 2016 vowing to carry out an ambitious infrastructure spending plan but also to safeguard the budget discipline of his predecessor, Benigno Aquino III, by raising new taxes. During 2013, Fitch, Moody's and Standard & Poor's all gave the Philippines investment-grade ratings, the first in the country's history, and the Duterte team has been keen to maintain Aquino's fiscal legacy. 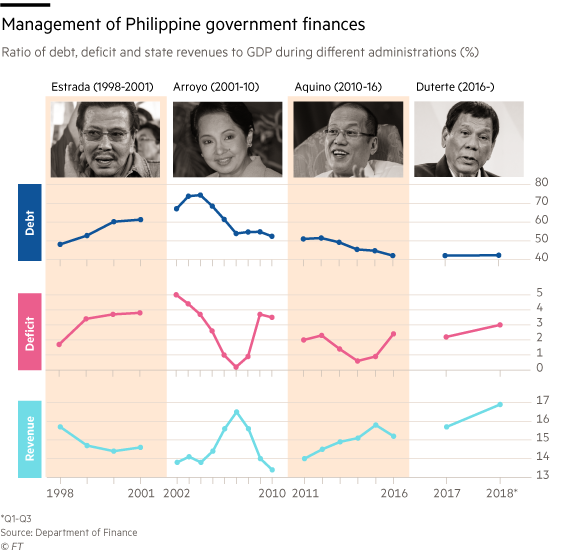 The ratings agencies liked the Duterte government's message: while Philippines infrastructure was in notoriously bad condition, the government was making sure enough revenues were raised to offset the spending needed to fix it. State capital expenditure is expected to have reached a record high of 6.2 per cent of GDP last year, compared with an average of 3 per cent under Aquino. Construction jobs are also increasing, from 7 per cent of employed people in 2015 to 9.4 per cent last year. But the government's discipline appears to be weakening. Although full-year numbers are not yet available, it is likely that the administration breached its fiscal deficit limit of 3 per cent of GDP in 2018 for the first time in nine years. The self-imposed ceiling was increased to 3.2 percent of GDP this year, supposedly to accommodate more infrastructure investment. However, Duterte is not only increasing spending on roads and bridges. Populist programs aimed at boosting public support are also getting more funding.

Since 2017, Duterte has introduced free tuition in state universities, free broadband and free irrigation services for farmers. He also ordered the doubling of military and police pay to drum up support for his war on drugs. Collectively, the cost of these programs will reach 125bn pesos ($2.4bn) this year, up 16 percent from 2018 and more than three times the bill in 2017. The government's problem is that its deficit projections to 2021 are based on overly ambitious growth targets. If the economy grows at the targeted 7 percent, this implies spending on social programs equivalent to 0.7 percent of GDP, up only slightly from 0.6 percent last year. But the Philippines economy has not grown at 7 percent since 2013 and is unlikely to do so this year.

The government cannot rely on collecting more taxes to bridge a growing deficit. Last year's tax law was a product of political compromise that has so far failed to raise the revenues expected. With less revenue than forecast coming in, the government has no choice but to borrow the bulk of the additional 722.2bn pesos it estimates will be needed to fund infrastructure investment from 2019 to 2022. 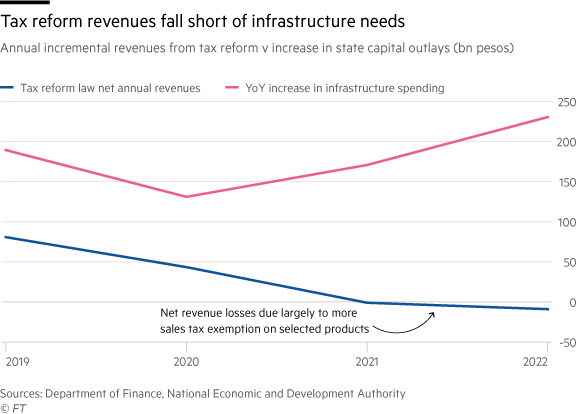 The Philippines will hold midterm elections in May, and a ban on new public works for 45 days before the polls will keep spending -- and the deficit target -- in check this year. But increasing spending on populist programs means the deficit is set to rise for the remainder of Duterte's term, once again breaching the 3 per cent cap.

On their current trajectory, we estimate such programs will cost 151.5bn pesos by 2021, nearly four times their 2017 level. This will be driven by a new round of pay rises for government personnel starting next year, as well as rising state university enrollment. Funding for Duterte's free programs comes on top of existing social safety net programmes, such as cash transfers to poor families, the costs for which have grown to nearly 90bn pesos a year.

Given the political difficulties involved in cutting funding to populist programmes, spending cuts may instead come from the infrastructure investment plans that underpin the country's credit ratings. A combination of increased spending on handouts coupled with reduced infrastructure investment would raise red flags at the rating agencies. Fitch kept its triple B rating unchanged in a review in December but warned that a downgrade could be triggered by a "reversal of reforms or departure from existing policy framework."

Although the Philippines started 2019 in the good graces of the global bond market, its deteriorating fiscal outlook suggests this may not last.