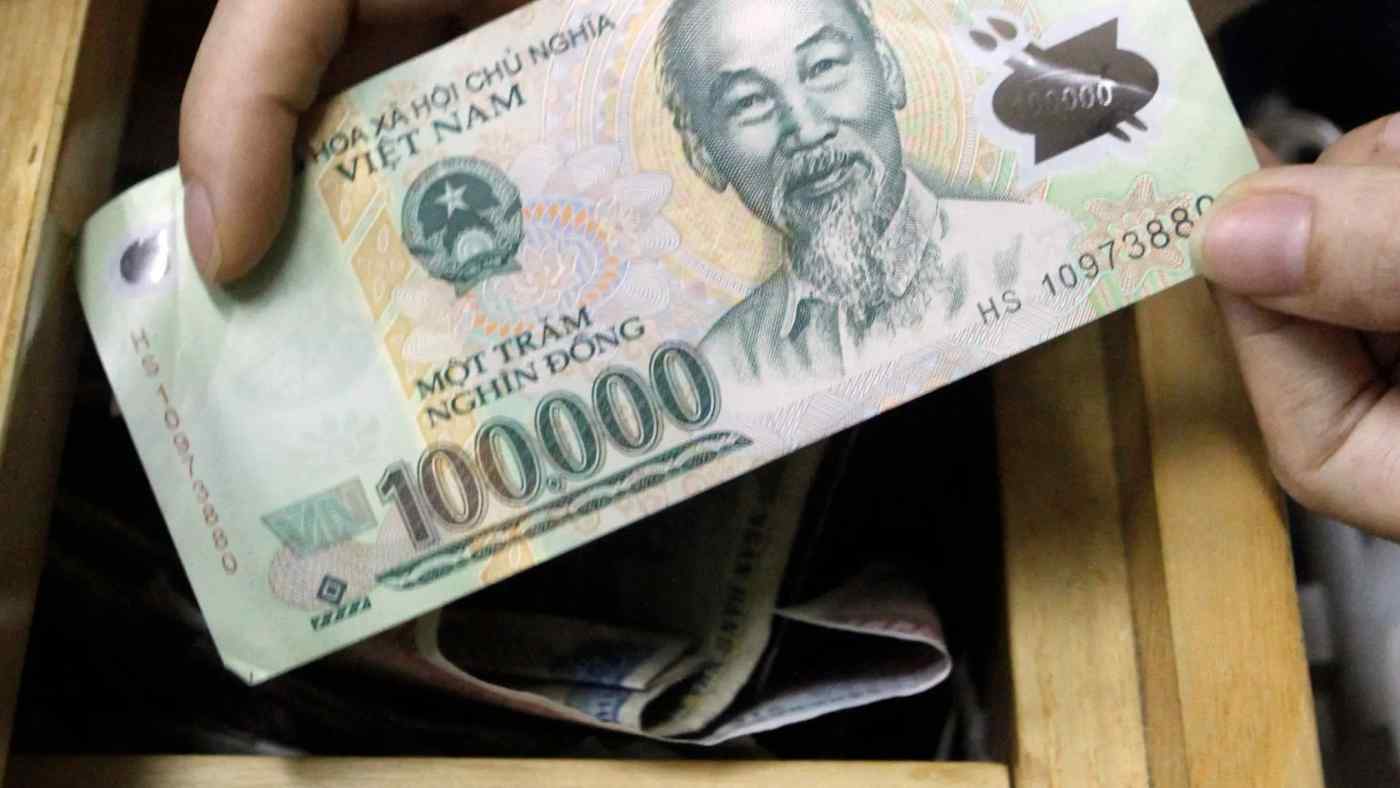 Vietnam risks stumbling in its goal of becoming a cashless society as central bank regulations constrain the spread of digital transactions.

Investment is pouring into the sector and plenty of cash is being burned, as companies spend aggressively to gain market share. But the State Bank of Vietnam will have to relax its stance if the takeup of digital payments is not to be disrupted by tighter rules on e-wallets.

FT Confidential Research's most recent survey of urban consumers found 46 percent use cash exclusively when making transactions. This may suggest the government is on track to meet a 2020 goal of reducing cash-based transactions of urban households to 50 percent. However, Vietnam is a clear laggard in the adoption of cashless payments within the ASEAN 5, and is likely to remain so unless regulations are relaxed.

The government hopes mobile payments will spur its cashless drive, helped by the growing popularity of smartphones and a young and tech-savvy population. The State Bank of Vietnam says 41 banks and 23 non-bank fintech companies now provide mobile payment services.

Although they still make up less than 10 percent of digital transactions, mobile-based transactions have grown rapidly in Vietnam. In the first nine months of 2018, mobile banking transactions grew 126 percent year-on-year in value terms to 1,032tn dong ($44.5bn) while transactions via e-wallets -- mobile payment services offered by fintech companies -- accelerated 161 percent to 65tn dong. 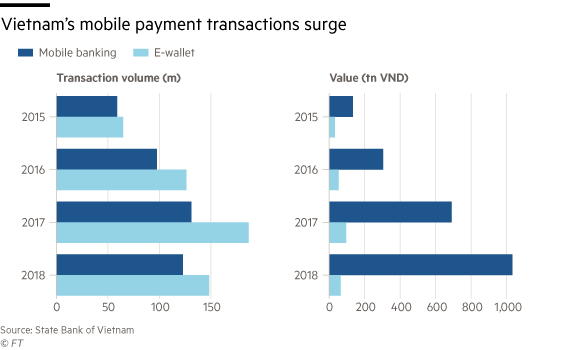 E-wallets are the relative minnow but they could have the biggest impact on the government's cashless agenda because they are designed to handle low-value, daily transactions; the average size of an e-wallet transaction is $19 compared with $366 per mobile banking transaction.

Fintech companies have led the adoption of mobile payments in Vietnam, especially for the purchase of low-cost daily items. These companies are developing one-stop-shop apps and spending heavily to entice new users. 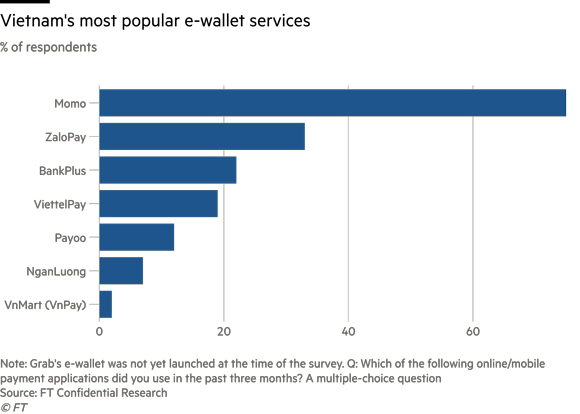 Homegrown Momo was easily the most popular e-wallet in Vietnam in our survey and the most aggressive in building market share. It signed up its 10 millionth user in November, marking a tenfold increase on two years earlier. The company attracted foreign funding early on, securing $28m from Goldman Sachs and Standard Chartered Private Equity in 2016.

ZaloPay, the second most cited e-wallet service in our survey, has quickly grown after launching in late 2017, relying on the network of 100 m registered users of its parent company VNG Corporation. VNG is Vietnam's first unicorn and owns online entertainment products and a social media platform, Zalo.

Tied together by red tape

Spurred by government policy, banks and fintech companies have worked together closely to convert Vietnam's consumers. Traditional lenders have tended not to see fintech players as a threat, with the better-known e-wallet companies partnering with a large network of banks, generating commission and fees. Compliance used to be patchy. However, the central bank has tightened up in the wake of a crackdown last year on an illegal online gambling ring funded by anonymous e-wallet transactions.

Enforcement of the regulation is causing anger among consumers and has been a disincentive for prospective e-wallet users, discouraging the spread of cashless payments.

As of January 1, Momo said it was freezing e-wallets that have not registered a valid bank account. In October, Grab publicly apologized after launching an e-wallet service that forced users to register bank accounts in their own names. Users were frustrated by the way the changes were rolled out, but also by the fact that they could no longer use the bank cards of relatives to top up their Grab accounts.

Registration is further complicated by the need for internet banking, which is an add-on service in Vietnam that typically comes with a monthly fee and tends to be shunned by retail account holders.

Requiring prospective mobile payment customers to have bank accounts works well in a country such as China, where 80 percent of people have accounts and where WeChat Wallet and Alipay have come to dominate payments.

In Vietnam, however, just 31 percent of the adult population have a bank account, meaning that the central bank's current stance will put a low ceiling on the takeup of e-wallets.

Change is going to come

Fintech companies have been lobbying for change, and the government may be responsive. The central bank has been asked to explore the possibility of allowing direct cash top-ups for e-wallets and is expected to deliver its opinion in the third quarter. Any trade-off that unshackles e-wallets from the banking system may come with enhanced "know your customer" rules, requiring users to register details at points of sale.

But liberalization will have to go further if the government is to advance the takeup of cashless payments. As platforms proliferate, the next step will be to tackle the question of interoperability, which would permit transactions across various competing platforms. This is being explored in the Philippines and Indonesia and, in the absence of a duopoly such as exists in China, will be needed in Vietnam if Hanoi is serious about meeting its cashless goals.