An attendee uses a new iPhone X during a presentation for the media in Beijing, China.
FT Confidential Research

Buzz over latest handset has buyers splashing out on smartphones: FTCR

The launch of its iPhone X has boosted Apple's popularity in China and may be persuading consumers to pay more for smartphones, a survey by FT Confidential Research showed.

Apple remained China's second-most popular smartphone brand behind Huawei in our latest survey, but its popularity has edged up slightly from September (see chart), a move we ascribe to the buzz about its latest high-end handset. The iPhone X will be a key contributor to anticipated record profits in Apple's most recent quarter, with a report scheduled for announcement on Thursday in California. Apple shares fell this week after Nikkei reported that the company will cut production by half this quarter because of disappointing end-of-year sales, including in China.

The iPhone X tests the willingness of consumers to pay $1,000 for a smartphone ($1,334 in China). As with South Korean rival Samsung, Apple has come under pressure in the world's biggest smartphone market as upstart local brands offer cheaper, Android handsets. The flagship Mate 10 Pro from Huawei was released in December starting at just over half the cost of an iPhone X.

Nonetheless, our survey indicates the iPhone X has been a success with Apple's China fan base. The brand still boasts impressive loyalty among Chinese users -- 76% of current iPhone users said their next handset would also be an iPhone -- and the 8,388 yuan starting price for the iPhone X is no deterrent for respondents from high-income households. Among these, 59.7% said their next iPhone would be an iPhone X.

We do not see Apple's global battery replacement program as a major threat to China sales. Although 58.2% of respondents with an iPhone said they have, or intend to have, their batteries replaced under the 218 yuan program, these handsets will mostly be used as backups or passed on to friends or family.

Our survey also suggests consumers are budgeting more for their handsets, reflecting the iPhone's elevated price. The proportion of all smartphone users in our survey who said they were willing to spend more than 4,000 yuan on their next phone increased to 27.1% (see chart). 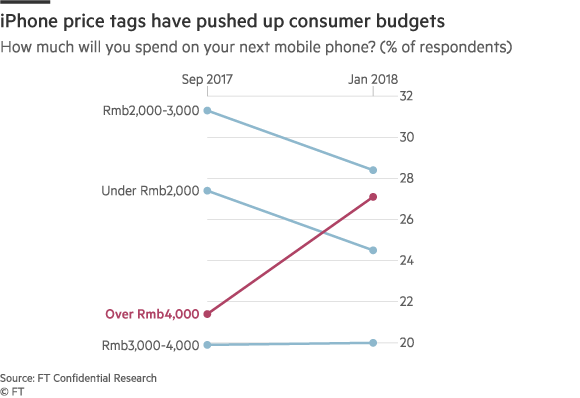 Nearly 10% of all iPhone users in our survey have already made the switch to Apple's latest handset. Another 49.5% said they intended to buy an iPhone X, up from 29.9% in September 2017, when the phone had just been announced (see chart). That shift in demand partly reflects flagging demand for the iPhone 8 and 8 Plus, models with older designs that were announced along with the iPhone X. 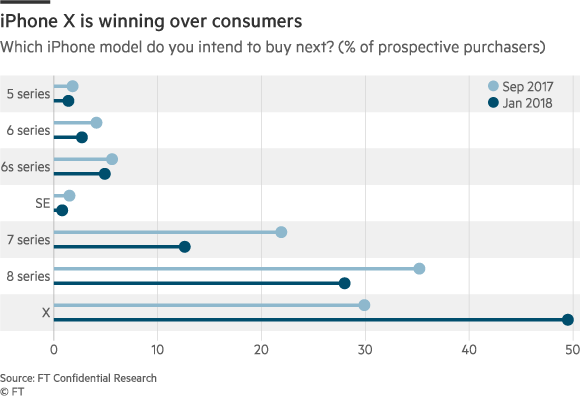 Demand was also strong among our youngest survey group. Online discounts and financing options mean the iPhone X is an option for many 18-24-year-olds. The retailer Suning currently offers 600 yuan off a 256GB model, while 33.8% of prospective iPhone buyers said they planned to buy a phone on installment, compared with 27.8% of all phone buyers surveyed.

Smartphone sales in China may finally be falling. However, this shift will have a bigger impact on the crop of domestic brands touting low-priced Android phones. Just 28.3% of Meizu users said they intended to buy the same brand when they replaced their current handset.

It may not dominate the smartphone market as it once did, but Apple's unique ecosystem and cutting-edge devices continue to impress its Chinese fans. The company looks likely to continue testing their capacity to spend ever-higher amounts; rumors are already swirling about the launch of an iPhone X Plus later this year.