Indonesian startup, valued at $10bn, bets on food and payments as earners: CEO TOKYO -- Go-Jek aims to build pockets of profit in its food delivery and finance, CEO Nadiem Makarim said, arguing that the Indonesian startup does not need its founding ride-hailing business to make money when it goes public.

"The most powerful asset of Go-Jek [is] that we don't need four-wheel ride-hailing to be profitable," Makarim told the Nikkei Asian Review in an interview here on Wednesday. "Ride-hailing... represents less than a quarter of our overall gross merchandise value. Food is bigger and payment is even much bigger."

"We built the business with the assumption that ride hailing is only at a break even," Makarim said, describing this as the "base" scenario.

"So even at that we can hit profitability" when Go-Jek goes public, he added. Profitability in ride-hailing is an "optimistic scenario."

The remarks come amid growing skepticism over the ride-hailing business model following this month's initial public offering of Uber Technologies. The Silicon Valley startup, which pioneered the business of booking rides on a smartphone, went on to become the largest private technology company in the world. But its shares tumbled in its market debut after revealing massive losses, raising questions over the high valuations of ride-hailing unicorns elsewhere.

Go-Jek, the most valuable private company in Indonesia, was seen as part of a wave of Uber-like businesses when it launched its motorbike-hailing app in January 2015. As the company faces growing scrutiny over its own path to profit, it is sending a message: Go-Jek is not Uber.

Asked the difference between Go-Jek and typical ride-hailing companies, Makarim said, "Everything."

He said motorbike-hailing is an important component to Go-Jek's overall business not because it is a cash cow, but because it is the mostly frequently used service that draws users to the app and provides a constant source of income for its two million drivers. The company has already diversified into more than a dozen services including food delivery and payments, which the company said generate $2 billion and $6.3 billion, respectively, in annual transactions.

Go-Jek's ride-hailing service depends mainly on motorbikes, making it less expensive than cars. Two-wheelers are popular way of weaving through traffic-clog city streets in Indonesia and other parts of Southeast Asia. 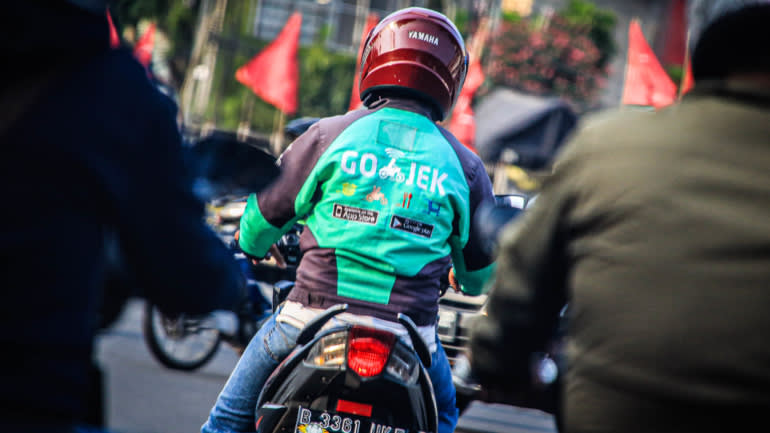 Go-Jek is backed by powerful investors including Google, Tencent Holdings and KKR. (Photo by Kosaku Mimura)

The deeper push into non ride-hailing businesses reflects Go-Jek's strategy of combining the "stickiness" of ride-hailing -- its ability to keep customers coming back -- with revenue streams from restaurants or shops looking to attract customers.

Makarim declined to give a timeline for profitability, indicating that it may remain a distant goal. Go-Jek intends to "reinvest everything into growth" to capture market share for now, he said. The company is in a bruising battle with Singapore-based Grab, which has also branched out into food delivery and payments, for supremacy in Southeast Asia.

Go-Jek is backed by powerful investors including Google, Chinese internet group Tencent Holdings and U.S. private-equity firm KKR. It is valued at $10 billion, making it a so-called decacorn, according to CB Insights.

In the interview, Makarim also revealed that Google has invested $500 million in Go-Jek, calling his company Google's "biggest partner in Southeast Asia."

The focus is turning to whether Go-Jek can replicate its rapid growth outside its home country without losing ground at home. It has recently expanded into Vietnam, Singapore, and Thailand while Grab invests heavily in Indonesia, Southeast Asia's biggest economy.

Makarim said he is "very happy" with its early progress in overseas markets, and added that he is also considering entering Malaysia. Go-Jek continues to seek entry into the Philippines, where its application was recently rejected by local regulators for not meeting local ownership requirements.