US lawmaker stresses need to cooperate with Japan, South Korea in Indo-Pacific 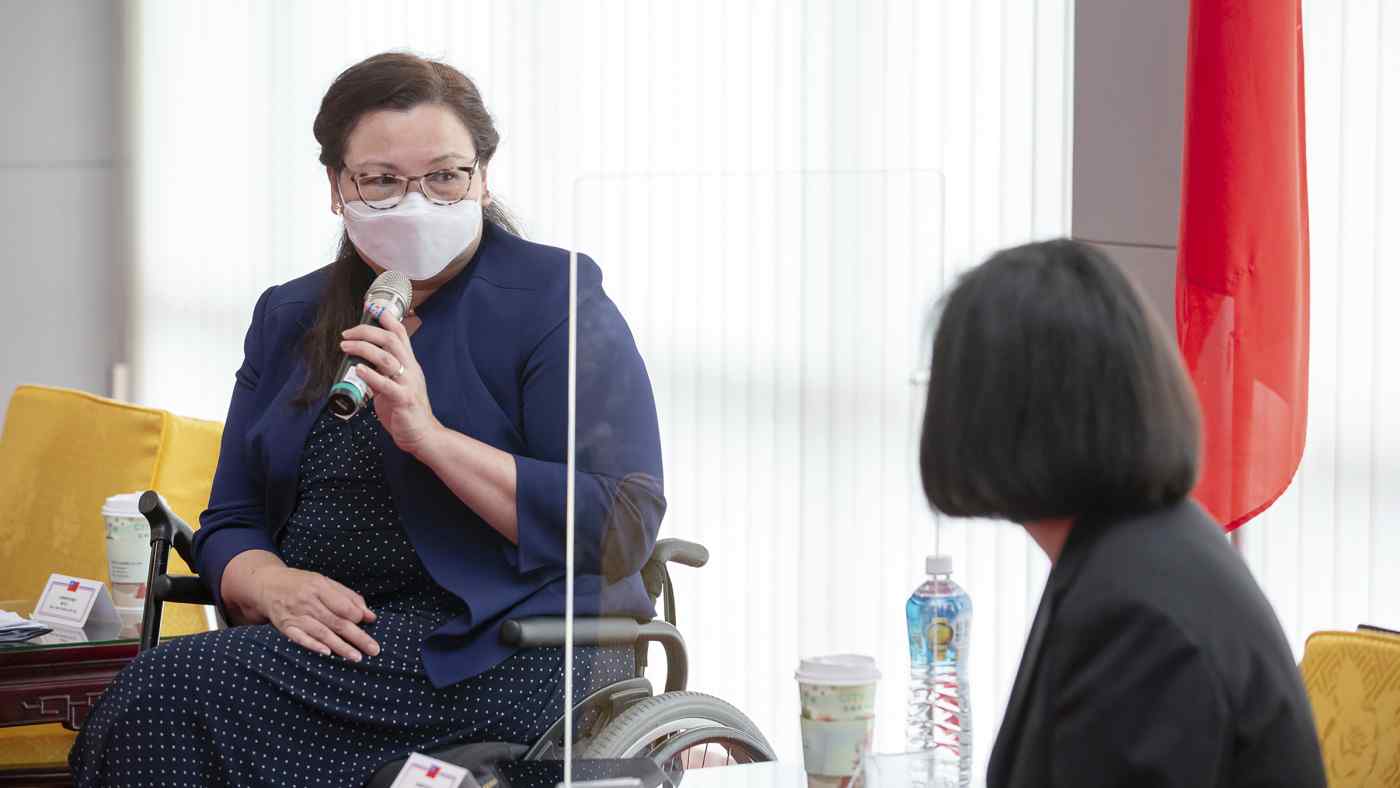 WASHINGTON -- U.S. Sen. Tammy Duckworth said she wanted Taiwanese people to know that "America will not abandon Taiwan" and that "we will show up, and not let them face trials and tribulations alone," explaining her recent trip to the island in an interview with Nikkei.

Expressing alarm over China's lack of respect for "territorial borders," the Democratic senator from Illinois also urged greater cooperation with allies like Japan and South Korea in the greater Indo-Pacific region.

Duckworth met with Taiwanese President Tsai Ing-wen during a brief visit to Taipei Sunday, along with Democratic Sen. Chris Coons and Republican Sen. Dan Sullivan. Duckworth announced that day the U.S. would provide 750,000 doses of coronavirus vaccine to Taiwan, which has been contending with a surge in COVID cases.

"This is about standing up with friends when they are in need," said Duckworth, noting that Taiwan sent personal protection equipment to the U.S. when it was in the throes of the pandemic.

In preparing for the trip, the three senators had worked "very closely" with the Biden administration, she said.

She, Coons and Sullivan "for several weeks now have been talking with the Biden administration about the need to send vaccines to Taiwan, particularly because the PRC has been cutting off Taiwan's access to vaccines," she said, using the acronym for the People's Republic of China.

Duckworth said she discussed the idea of going to Taiwan with U.S. National Security Advisor Jake Sullivan while in South Korea, which the three senators visited just beforehand. "They said, 'Absolutely. We'll provide you with the aircraft,'" she noted.

The choice of who went on the trip "was very much" intentional, Duckworth said. Both she and Sen. Sullivan are veterans, while Coons has worked closely with the Biden administration on diplomatic efforts, especially regarding human rights concerns.

"We wanted to be sure that the message we sent was that this was bipartisan and that we supported Taiwan, both from a national-security perspective but also from a humanitarian-friendship perspective as well," she said.

There has been growing concern within the U.S. military about possible Chinese military action on Taiwan, which Beijing considers a Chinese province and part of its sovereign claim. Adm. Philip Davidson warned earlier this year when he was commander of the U.S. Indo-Pacific Command that China could attempt to take control of Taiwan within six years.

When asked whether she shared this sense of urgency, Duckworth replied: "I certainly do."

"Both Japan and the United States, and also [South] Korea, we are the stalwarts for democracy in the region," she said, adding that "we, together with our allies, need to make sure that there is integrity with the Taiwan Strait and maintain Taiwan's ability to defend herself."

The senator also warned about China's ambitions beyond Taiwan, particularly its military expansion in the South China Sea.

"I think it's important that America remains engaged with Taiwan, but also across the Indo-Pacific region," she said. "We've seen over the last several years that the PRC is not willing to respect territorial borders, that they will go out and build entire islands in the South China Sea to create new territories that they can claim."

"I will make sure that we remain engaged to uphold the rule of international law, that we are prepared to defend freedom of navigation, and that nations can claim their territorial waters," she said.

Duckworth was born in Bangkok and speaks Thai and Indonesian. In 2004, she was deployed as a helicopter pilot to Iraq, where she lost both legs in a crash.

She served as an assistant secretary at the Department of Veterans Affairs under the Obama administration before taking office as a senator for Illinois in 2017. In the 2020 U.S. presidential election, she was viewed as a potential running mate for President Joe Biden, who eventually selected Kamala Harris.

Duckworth is a member of the U.S. Senate Armed Services Committee, and chairs the Subcommittee on Airland. In 2018, she became the first senator to give birth in office, casting a vote with her newborn by her side just 10 days later.