MANILA -- Mynt, the Philippine fintech company backed by China's Ant Group, is eyeing a further round of fundraising to secure a $1 billion valuation as the race for scale intensifies in the country's fast-growing digital banking market.

The growth of Mynt underlines how Southeast Asia is becoming a fintech battleground after the coronavirus pandemic spurred use of mobile payments and as regulators move to encourage competition between established banks and digital rivals.

Mynt's GCash app is the largest mobile wallet by number of registered users in a market that is drawing investor interest from around the world.

The company, formally known as Globe Fintech Innovations, recently closed a $175 million funding round to bankroll its foray into more lucrative financial services such as credit and investments, where it would be pitted against the country's banks.

Mynt CEO Martha Sazon made clear in an interview on Jan. 15 that the company was already considering more fundraising.

"What I can tell you is we could open up another round this year," Sazon told Nikkei Asia. 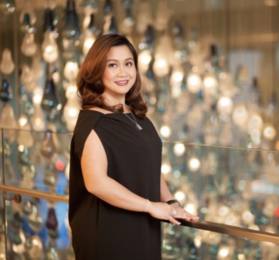 Mynt CEO Martha Sazon says the e-payment provider could open another round of fundraising this year. (Photo courtesy of Mynt)

The terms of that transaction were negotiated in early 2020 and thus did not factor in Mynt's explosive growth during the pandemic-induced lockdown in the Philippines, which pushed the company closer to profitability.

The entry of Bow Wave diluted the shareholdings of Globe Telecom and Ant, the financial affiliate of Jack Ma's Alibaba Group Holding, to 40% each from 46% previously. Philippine conglomerate Ayala's stake fell to 6% from 8%. Bow Wave is mandated to invest in online payment companies backed by Alibaba.

Sazon, who helped grow Globe's mobile and broadband businesses before taking over Mynt's leadership in June, said a prospective investor should be "someone who is aligned to the GCash story and vision, which is providing financial services for all."

"The Philippines is a different market. It is not China. It is not India. The investor has to have an appreciation of the dynamics in the Philippines and the challenges that we have," Sazon said.

GCash was launched by Globe as an SMS-based money transfer service in 2004, when the Philippines was regarded as the world's texting capital. Ant's entry in 2017 helped transform GCash into a more sophisticated app that allows users to transfer money, pay bills and buy merchandise using QR codes.

Mynt's next round of fundraising, Sazon said, should take into account its performance last year. The number of registered GCash users jumped to 33 million from "over 20 million" the previous year, according to the company, while the gross value of transactions hit a record 1 trillion pesos ($20.8 billion). The company does not disclose the number of active users.

"We have seen the continued growth of our key metrics ... and that should translate to improved valuations," Sazon said.

Philippine regulators have long tried to encourage electronic and mobile payments in a country where cash is king, distrust of e-money platforms is common and only 30% of the population has a bank account. But the pandemic forced many to go online, including some cities that distributed cash subsidies to residents through mobile wallets like GCash.

"Imagine you are a business [and] you had to close shop. And suddenly it would be very difficult for you to accept cash. That was the situation that faced a lot of these 500,000 sellers," Sazon said.

With its payment solutions business flourishing, Mynt is now looking to offer more financial services, such as wealth management and investment options starting from as low as 50 pesos ($1), as well as savings and credit.

Mynt plans to partner with other financial institutions for these services, and their rollout will likely come against the backdrop of rising soured loans for banks due to the economic downturn brought on by COVID-19.

Despite overlapping services with banks, Sazon said Mynt is a partner, rather than a competitor. The company has teamed up with the Philippine unit of Malaysia's CIMB Group for savings accounts and with the local arm of Singapore Life for insurance.

At the moment, Mynt does not intend to apply for a digital banking license, which the Philippine central bank recently introduced. Mynt's e-money issuer and lending licenses are "more than enough to support our initiatives," Sazon said, adding that the company's main strategy is to become a "platform" for other financial institutions.

Mynt's game plan, in some respects, mirrors the strategy of Ant Group, which was originally a Chinese online payment platform before becoming a fintech behemoth with successful high-margin financial services. But Ant recently found itself in the crosshairs of China's Communist Party with the suspension of its $37 billion initial public offering.

According to Sazon, Ant's recent troubles do not affect her company. "Regardless of the situation outside, the GCash story will still continue," she said.

Sazon expects the momentum for digital payments to continue this year, which she says has improved Mynt's prospects for profitability.

"Definitely, the path is getting clearer and clearer. We have achieved significant strides in the monetization last year," Sazon said. "It will be very challenging still, but I hope we can achieve that sooner than originally planned."