"You should not have market concentration, and we are saying to all our exporters that you should look to spread your risk around the world," Littleproud said in a recent telephone interview with Nikkei. He named Saudi Arabia, the United Arab Emirates, Vietnam and Indonesia as growing markets.

China imposed in May an 80%-plus tariff on barley from Australia and barred beef imports from four Australian abattoirs. The moves are widely considered retaliation for Prime Minister Scott Morrison's push for an independent investigation into how the new coronavirus got its start and spread from the Chinese city of Wuhan.

But Littleproud downplayed any such connection. He said that China had been reviewing its barley imports from Australia for around 14 months and that one of the affected abattoirs is "majority Chinese-owned" -- so "face value, I don't think there is a link."

With regard to the beef, the Chinese authorities took issue with labels and other technical issues at the abattoirs, he said. 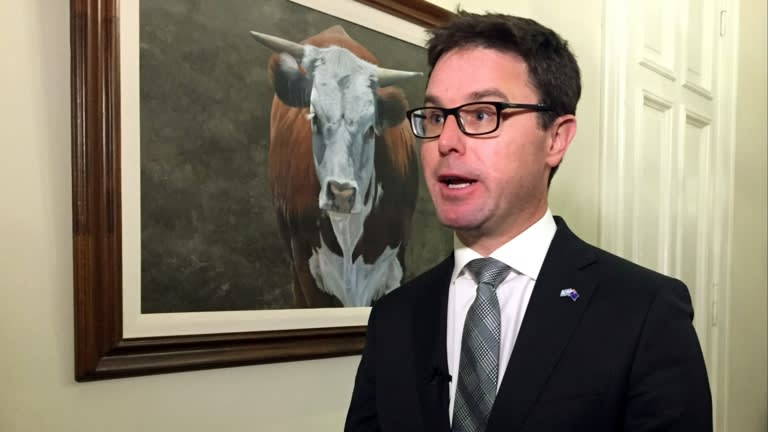 Officials from both countries are discussing the situation. "Hopefully we will have some finalization of that in the coming couple of weeks," Littleproud said.

China accounted for about 30% of Australia's roughly 53 billion Australian dollars ($36.5 billion) in exports of agricultural, forestry and fisheries products in the year ended June 2019. Agricultural exports to China have increased 4.5 times in a decade.

But despite the impact on trade, Canberra does not appear to be backing off on the coronavirus inquiry. "Australia has proudly led the world in doing the responsible thing in simply asking a question about a pandemic disease," Littleproud said.

The goal is not confrontation, but understanding, he said.

The virus is believed to have originally come from bats or other wild animals. Littleproud said he told Group of 20 agricultural ministers "that we should start to explore and understand wildlife wet markets."

The world will also need to think about "how we regulate or phase them out while maintaining food supply, particularly to those developing nations," he said.