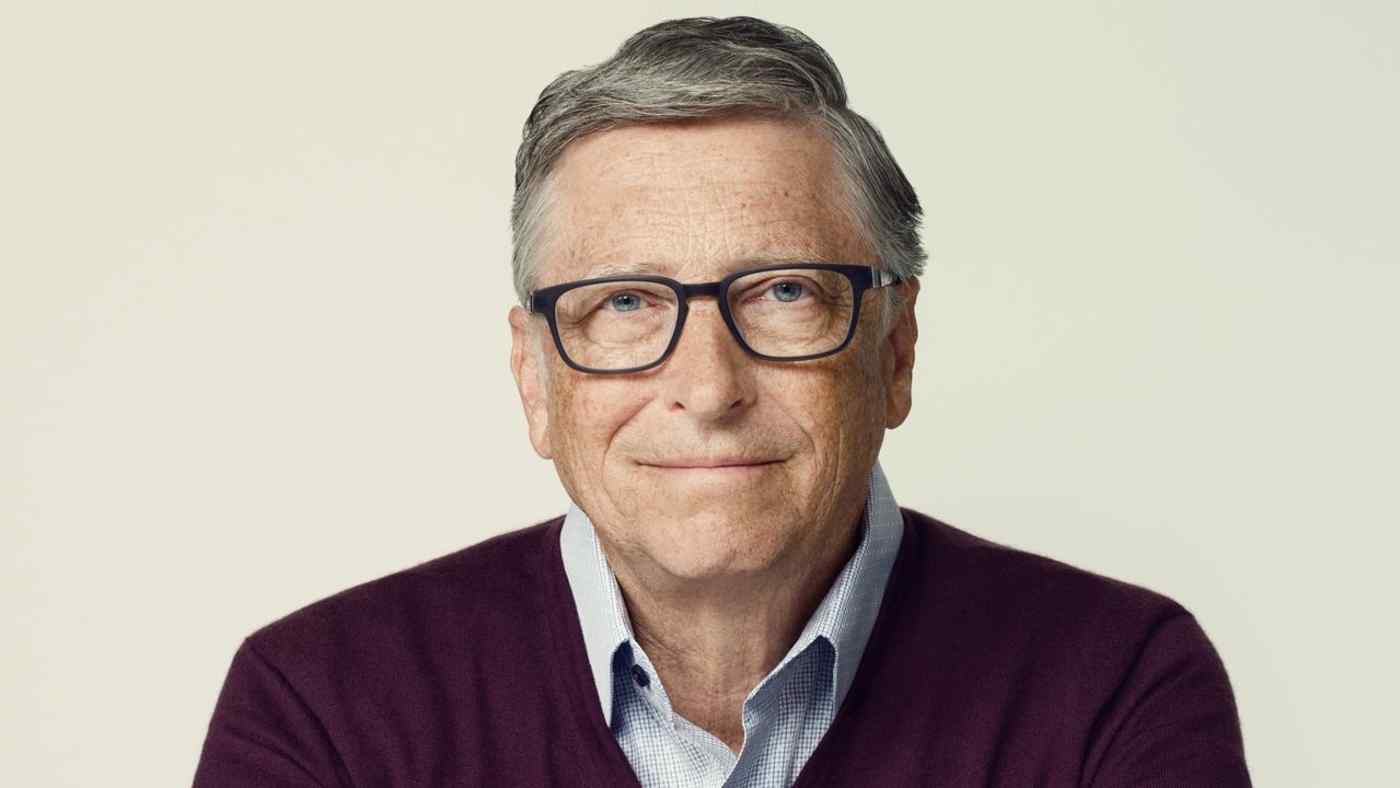 Bill Gates has invested "in many, many, many battery companies" in his pursuit of eliminating "the green energy premium." (File photo by John Keatley)
AKIO FUJII, Nikkei chair of editorial boardFebruary 17, 2021 12:19 JST | Rest of the World
CopyCopied

TOKYO -- Bill Gates, who founded Microsoft in the 1970s, today is focusing his philanthropy on two of the world's biggest threats, the COVID-19 pandemic and global warming.

In an interview with Nikkei and other Asia-Pacific news organizations, Gates did not shy away from controversial topics, such as his insistence that the world pursue fourth-generation nuclear reactors as a source of clean energy. He also expressed his disappointment at being the target of COVID-19 conspiracy theories.

A central theme of Gates' work on the climate is bringing down the price of green energy so that there is no additional cost in choosing a new technology over one that emits a greater amount of greenhouse gases. He intends to "innovate" the current premium "down to close to zero, or at least a 95% reduction" in 10 years' time.

Gates was enthusiastic about President Joe Biden bringing the U.S. back into the Paris Agreement, which calls on nations to cut their carbon emissions. He also voiced support for Japanese Prime Minister Yoshihide Suga's pledge to reduce the country's greenhouse gas emissions to net zero by 2050, saying all developed countries should adopt the same target.

The interview coincided with the release of Gates' book, "How to Avoid Climate Disaster." His answers have been edited for clarity.

Q: How did you start to tackle the climate change problem?

A: In 2000, we created the Gates Foundation. And I started traveling in Africa, and seeing the lack of electricity and thinking how easy it was to change that. But climate change, without a constraint on the way we did it, would make it a lot harder. Electricity is so important -- lights at night and keeping vaccines cold -- and I was stunned how little there was and how unreliable it was.

In early 2015, before COP21 [the 21st Conference of the Parties of a U.N. climate framework was held in Paris], my dialogue with former President of the U.S. Barack Obama, former French President Francois Hollande and Indian Prime Minister Narendra Modi kept centering on, 'Hey, how can we make this climate conference, really a great one? And the idea of a focus on innovation came up, including R&D commitments. We held this huge side event called Mission Innovation.

The leaders who were there made these commitments; they said they would double their energy R&D budgets over a five-year period. Now, sadly, only very few countries have done that. The U.S. increase was about 18% under Obama. And for the last four years, there's been a fight to make sure that doesn't get decreased. So it has stayed flat because the Congress was pretty supportive against the recommendations of the executive branch.

I also committed, as part of that, that there would be a venture effort that I got a lot of wealthy people to contribute to. So we had a billion-dollar fund called Breakthrough Energy Ventures, and we raised $2 billion. We've invested in over 40 companies.

Over the next 10 years, the best metric is looking at these green premiums [the additional cost of choosing a clean technology over one that emits a greater amount of greenhouse gases], and whether they can be innovated down to close to zero, [or] at least a 95% reduction.

Q: In October, Japanese Prime Minister Yoshihide Suga announced a new target -- zero net carbon emission by 2050. How do you view Japan's role in climate change talks, especially at the COP26 conference in Glasgow, Scotland, in November? I understand you had a conversation with Mr. Suga in early January.

A: My talk with the Prime Minister [Suga] covered a number of areas, including a bit on climate, a lot of it was about global health because Japan has been a generous contributor to the Global Fund and has increased its role in Gavi, [The Vaccine Alliance].

The 2050 goal, I certainly endorsed that. I think that's the right goal for the world to have ... certainly all the rich countries. Japan's role, like all countries, is partly to contribute to innovation. And the car companies, they're not only doing electric cars, they're also doing some of these hydrogen cars that still may be valuable to you as you move up to larger trucks, where the distance and the weight starts to be higher. You know, it's possible that the hydrogen approach would end up being fairly key there. So I'm pleased that Toyota and others are keeping the possibility of hydrogen alive even though right now ... it looks like the electric battery could be the dominant approach at a smaller size.

So, [regarding] the overall R&D efforts of Japan, it is very important that we have that in coordination on a global basis. ... The energy R&D budget should go up a lot. The funding for entrepreneurs who have climate-related ideas should go up a lot.

Q: After the 2011 earthquake, the Japanese public grew very cautious toward nuclear power. You are supporting new-generation nuclear reactors.

A: If you've already built reactors, whether to shut them down or keep them running, is a question which Germany and Japan, France, the U.S. will all think about. But as far as climate goes, the question is not those ultra reactors. The big question is fourth-generation reactors, which will have to be about a quarter of the cost to build, which is kind of an amazing thing.

Particularly in the U.S. where natural gas is so cheap, without a carbon tax, that's a very difficult competition. Natural gas in Japan is over three times more expensive than in the United States, and so the economic challenge posed by fourth-generation reactors is very, very doable. Public acceptance will be a key issue.

Q: How do you plan to work with U.S. President Joe Biden and his administration regarding climate change?

A: My wife, Melinda, and I had a chance to talk to the president-elect, now President Biden, soon after the election [in November]. The two big topics were climate change and the pandemic, [toward] which our foundation and our work hopefully can contribute quite a bit. I know the people he's appointed. I've talked to John Kerry as the international envoy [for climate]. I've talked to a lot of the other people there. These are people who understand climate and they know that governments can play a key role. John Kerry talks with Bill Gates before the start of commencement ceremonies at Harvard University in Cambridge, Mass., on June 7, 2007.   © AP

Of course, very quickly [Biden] put us back in the Paris Agreement. Everyone's hopeful that President Biden himself will show the importance of this by going to Glasgow.

I don't know that he will but I'm hopeful. He's made it one of his top four priorities. The scale of financial commitment that he wants to bring to bear on this is very impressive. I do think we'll get the R&D money. I do think we can make that bipartisan because these are long-term investments. [That] young Republicans care about these issues is very helpful to us. And, hopefully, we'll be able to be pragmatic and not have it be super partisan. The innovation agenda gives us our best hope there because a lot of Republicans see the benefits of those jobs and the companies that get created out of that.

Q: You are investing in a lot of new technologies such as electric vehicle batteries.

A: In terms of batteries, there are two battery things that are very different. One is batteries for electric cars or transportation, and the other is batteries for grid storage. Grid storage is 20 times harder, and it's not clear we can [meet the challenge]. I have money in many, many, many battery companies.

One, called Quantum Scape, went public recently. It makes a very nice car battery, about twice as good as today's lithium ion batteries, which [extends] the range. Over the next decade with fast charging and better range and lower cost, [the green premium] actually does get down to zero.

In the Breakthrough Energy Ventures portfolio you've got Malta, [which is working on a molten-salt-based storage battery solution]. And Quidnet Energy [which converts subsurface rock layers into energy storage reservoirs by] pressurizing underground water. It's amazing! And it looks like it can work. There's also an amazing battery company, Form Energy.

The developed countries haven't grown their electric capacity much at all. Hydro resources are by far the biggest green source, [but] in most countries, you can't scale that up. You're done with the good sites, and then ... nuclear, another green source, is controversial in many countries. We should pursue all three -- a storage miracle, nuclear fission and nuclear fusion -- and do our best to have those tools. You know, nuclear can be very safe. But getting the public to understand that, that's difficult. We have to have something that's dramatically different. And I hope that will be possible five years from now, after we show how well it works. 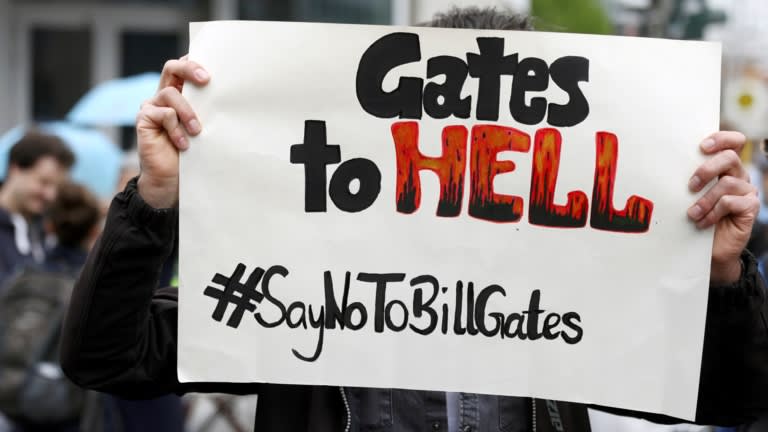 A protester holds up a placard during a demonstration against a lockdown imposed to slow the spread of the coronavirus in Berlin, Germany, on April 25, 2020.   © Reuters

Q: During the pandemic, due to online misinformation and conspiracy theories, some attitudes toward COVID-19 became similar to climate change denialism. "COVID-19 is a weapon" and "climate change is a hoax." You and Dr. Fauci have become targets among conspiracists.

A: I did not anticipate this, even though I did TED talks in 2010 and 2015 [the first was titled, "Innovating to Zero!" and the second was "The Next Outbreak? We're not ready"]. I did not expect there to be all these weird theories out there and in particular that I would be targeted. And that's kind of a sad thing; it's caused somewhat less mask wearing. It's caused some hesitation about the vaccines, which, ideally, we're going to get our coverage rate on the vaccines up close to 80%. And so if you have a lot of people believing those things, you might not be able to achieve the level that gives you the very strong herd immunity.

I hope [that with] these conspiracy theories we figure out how to inject the truth ... how to make the truth more interesting than the crazy idea. I think we're a bit naive about that and [about] the whole social media phenomena [in which] false information [becomes] so interesting to people.

It's kind of an amazing thing that somebody thinks I'm trying to track people or do microchipping. I don't know why that's come up.