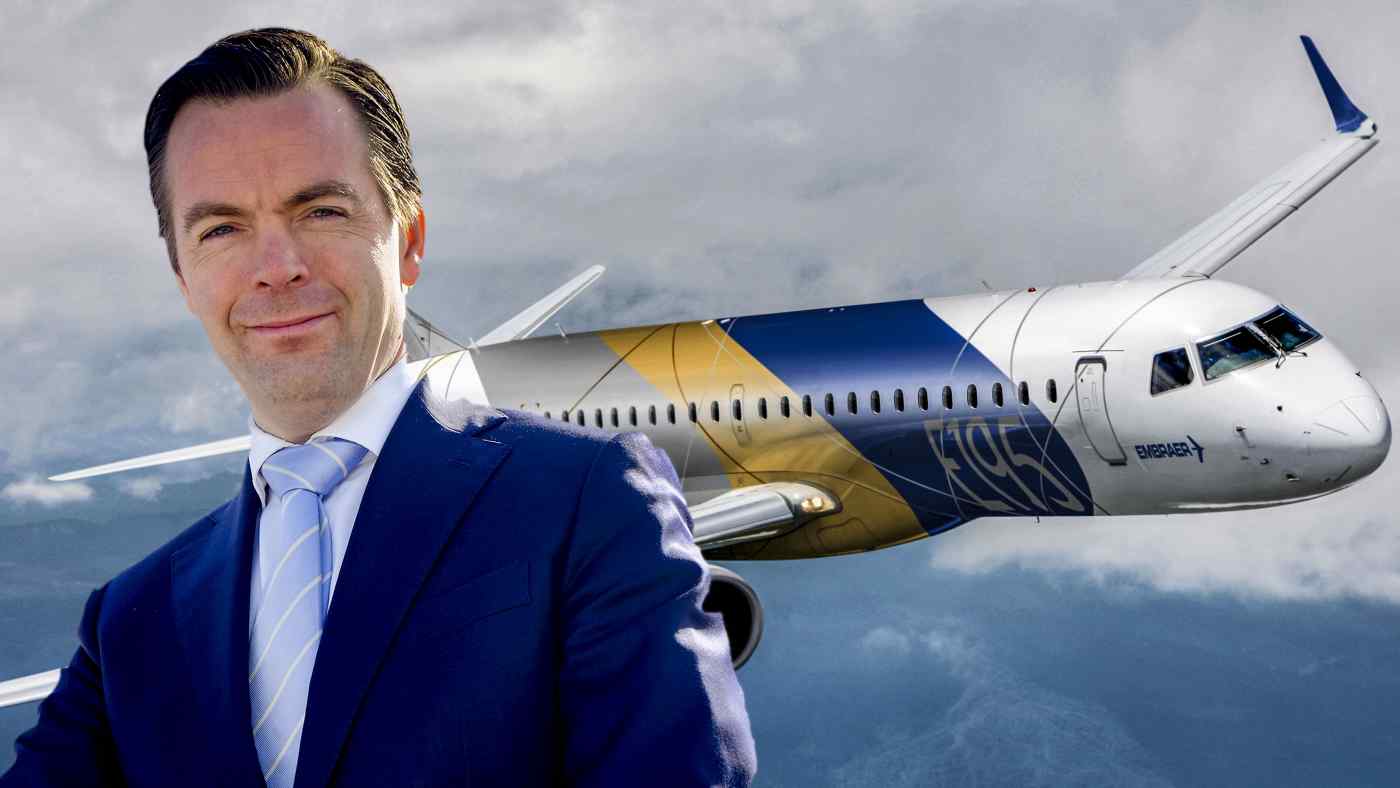 TOKYO -- Brazilian regional jet maker Embraer aims to expand its share in China, despite the rapid rise of that country's homegrown manufacturer.

"We see a huge market potential there," said Arjan Meijer, CEO of Embraer Commercial Aviation, in an interview. The company expects worldwide demand for 5,500 jets with up to 150 seats over the next 10 years. A third of that will come from Asia, with a large part of it from China, Meijer added.

Embraer has been the world's top manufacturer of small passenger jets called regional jets. But it faces competition from Airbus, which took over the regional jet business of Canada's Bombardier in 2018. Japan's Mitsubishi Heavy Industries is also eyeing entry into the market -- despite multiple delays and a recent freeze in the project -- after taking over Bombardier's regional jet maintenance and repair business last year.

China has its own homegrown aircraft maker: Commercial Aircraft Corp. of China (COMAC), which has developed the ARJ21 regional jet, with up to 90 seats, and the C919 narrow-body jet, seating up to 168. Beijing is keen to see the country's three major state-owned airlines use COMAC jets. As of now, COMAC has only 42 aircraft in service in China, or 1.1% of the country's commercial passenger jet fleet of 3,739, while Embraer has 96 jets, or a share of 2.6%, according to Cirium, an aviation data and analytics company. Narrow-body jets from Boeing and Airbus control 83% of the market.

Compared with the rest of the world, the aviation market in China has rebounded faster from the coronavirus pandemic. Domestic flight activity in China is now back to near pre-pandemic levels following a short-lived downturn in the run-up to the Lunar New Year Holiday on Feb. 12, Cirium data showed.

Meijer stresses the advantages of Embraer's flagship E2 aircraft, which sits between COMAC's C919 and ARJ21 in size and which he says is ideal for connecting China's regional cities as the country tries to achieve economic development in its inland regions and increase its connections with neighboring countries under the Belt and Road Initiative.

"With the ambitions of China to expand to the regional cities and surrounding Asian countries, we believe that giving the Chinese airlines access to the E2 offers great opportunities," he said.

Meijer argues that the newer E2 family -- the E195 E2, with up to 146 seats, and the E190 E2 at 100 seats -- complements COMAC's limited lineup. He also emphasizes that E2 aircraft are proven effective even in extreme climate areas, such as mountainous Tibet.

He still braces for competition with COMAC even outside China, though COMAC sales have so far been limited to China.

"They want to export, especially the C919, outside China," Meijer said. "We will see Chinese products become available outside China in the future" -- a prediction also made by other experts. COMAC aircraft don't have U.S. or EU certification, the de facto international standards, without which aircraft are difficult to sell in most markets.

But at least it has plenty of demand in China. Over time it will also build a track record, which could convince other countries to use the more affordable COMAC aircraft in the future. Meijer seems unfazed. He said that Embraer has a 51-year track record, not only in making aircraft but also in services and customer training. Selling passenger jets is a long-term business, with each aircraft having a 20-year lifespan or more.

"We believe the strength of Embraer sits in its products, but also in our support organization," Meijer stressed, adding that it has a network of service centers in China, India, the Philippines and Australia, in addition to parts distribution centers in China and Singapore, plus flight simulators in China and Japan. "We deliver reliability for the airlines."

Still, 2020 was a difficult year for Embraer as well as for its domestic airline customers. In the U.S., two major regional airlines, Trans States and Compass, went under. In the U.K., the largest domestic carrier, Flybe, also went bankrupt.

At Embraer, new orders slowed to a crawl last year, with the number of commercial aircraft deliveries down to just 44, from about 100 in a normal year.

"We expect 2021 to be a little bit better than 2020," Meijer said about deliveries. He predicts that sales growth will remain "slow" and take until 2024 or 2025 to return to pre-COVID levels, a forecast in line with those from the International Air Transport Association. World recovery in air travel has been gradual and led by domestic flights. In the U.S., for example, domestic air traffic is down 34% from a year before -- a smaller drop than international air traffic, which is still down 50%.

History offers a guide here. Demand for smaller passenger jets surged during the recovery phase from the Sept. 11 terrorist attacks in 2001, points out Yasuo Hashimoto, guest professor at the College of Aviation Management of J.F. Oberlin University in Tokyo.

Regional jets offer more convenience, for an extra cost, by flying more frequently. The strategy has worked in North America, the biggest regional jet market, which accounts for 70% of the global total, Hashimoto said. In Asia, however, low-cost carriers have prospered, focusing on keeping per-seat costs down by operating larger planes such as the Boeing 737 and Airbus A320, Hashimoto added.

Meijer hopes the lingering uncertainty about the pandemic and the changes in travel demand will convince Asian airlines to shift away from the strategy focused on one aircraft type such as the Boeing 737.

"In post-COVID, the market will be different. We believe, especially now, that the airlines need to rebuild their networks and their operations."