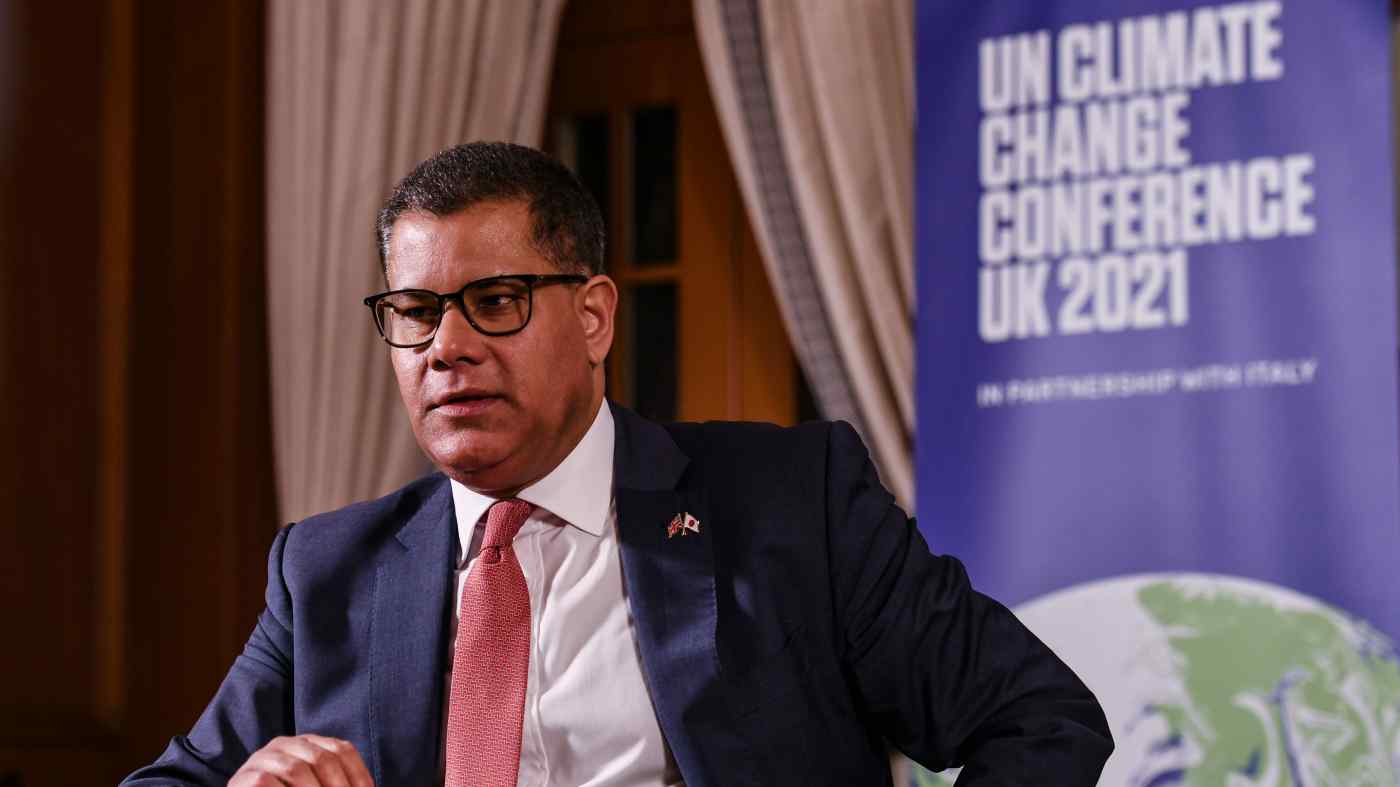 COP26 President Alok Sharma says "it is possible to make progress" toward carbon neutrality, pointing out how the U.K. has all but stopped burning coal in favor of wind power. (Photo by Kosuke Imamura)
AKANE OKUTSU, Nikkei staff writerApril 20, 2021 12:03 JST | Japan
CopyCopied

TOKYO -- The international climate conference scheduled for November in Glasgow, Scotland, will "set the trajectory for future generations," said Alok Sharma, president of the 26th U.N. Climate Change Conference of the Parties, who visited Japan this week.

The U.K. politician also spoke of COP26, originally planned for 2020 but put off due to the pandemic, as an overdue opportunity for world leaders to talk face to face about combating climate change.

"We are planning on this going ahead in November, in Glasgow, in person," Sharma told Nikkei Asia in an interview. "I think [it] is really important that all countries are able to sit at the same table, on a level playing field in terms of negotiations."

"We are working with our partners in terms of how we take care of different COVID scenarios," Sharma said, adding that he would ensure the delegates and local populace are kept safe.

The COP president, who since last year has visited India, Nepal and South Korea, went on, "I do not hear any appetite from countries that I talked to for delaying this conference."

Sharma stressed that COP26 "is our last best chance of making progress" toward meeting the 2015 Paris Agreement goals.

In the accord, the signatory nations pledged to keep the global temperature rise to below 2 C from preindustrial levels, or close to 1.5 degrees.

Sharma hopes the key message coming out of the conference is that "we kept the 1.5 degrees within reach," he said. "The decisions we make in the next years and the actions we take by 2030 are basically going to set the trajectory for future generations."

While in Tokyo, Sharma met with Prime Minister Yoshihide Suga as well as other ministers and business executives. Japan is now revising its Nationally Determined Contributions goal for 2030. The current target, for a 26% reduction in greenhouse gas emissions from 2013 levels, was set in 2015 and has been criticized by nongovernmental organizations and businesses as too low.

"We think an NDC of around 50% of 2013 levels keeps Japan on [the] net-zero trajectory by 2050," Sharma said. "What is very good news is the statements that I've had from ministers today that the revised NDC that Japan puts forward is going to be on that pathway to net-zero."

Reaching carbon neutrality is considered crucial if the world is to meet the Paris Agreement goals.

Sharma said he is asking governments around the world to set ambitious near-term emission reduction targets that show a trajectory to net-zero by the middle of the century, and to come forward with plans to adapt to the changing climate. He added that mobilizing private and public finance would be "incredibly important."

He also said he hopes "closing off" detailed rules that have to be worked out under the Paris Agreement, including the Article 6 pledge to establish an international carbon market.

Japan is often criticized for its reliance on coal-fired power plants. But, Sharma, said, "I've been encouraged [from] the discussions I've had [on Monday] about the commitments on renewable power."

He referred to the U.K., where reliance on coal for electricity dropped from 40% in 2012 to 2% last year, helped by robust growth in offshore wind power. "It is a demonstration that it is possible to make progress," he said, adding that he hopes to see other countries phase out coal.

Sharma added that investments by Japanese companies in the U.K. offshore wind sector are "a very concrete example of where we have worked together in terms of pushing forward the renewables agenda."

Sharma said he welcomes the U.S.'s return to the Paris commitment under the Biden administration. "I think it's added a particular impetus to climate action," he said.

As for China, the COP26 president says he would work with the country's leaders for the coming U.N. Biodiversity Conference, to be hosted by the Asian superpower.

When asked about U.S.-China political tensions, he said, "If ever there was a case or an issue for a multilateral approach, this is absolutely it."