"We have focused on business travelers taking mainly our international flights, but that demand will not come back to where it used to be," JAL President Yuji Akasaka told Nikkei Asia. (Photo by Manami Yamada)
ERI SUGIURA, Nikkei staff writerOctober 5, 2020 15:05 JST | Japan
CopyCopied

TOKYO -- Japan Airlines is to reduce its focus on international business travel to strengthen its low-cost network, its president has told Nikkei Asia, in a sign of how the coronavirus pandemic has shaken up one of the country's two main carriers.

JAL might also need further state support if its finances continue to deteriorate as a result of the massive downturn in demand for flights during the pandemic, Yuji Akasaka said.

His comments show that many airlines think travel patterns will undergo a permanent shift following the coronavirus pandemic, with far less of the sort of business travel that has underpinned profits at "full service" carriers such as JAL. The airline is to unveil a new midterm plan by March reflecting drastic changes in the business environment.

"We have focused on business travelers taking mainly our international flights, but that demand will not come back to where it used to be," said Akasaka.

"We need to leverage on low-cost models which suit holiday use so that it can complement reduced business demand," he added.

Demand for business flights is likely to shrink by 20-30%, he said.

His comments set the stage for a period of further restructuring at JAL, which got government help after it filed for bankruptcy protection a decade ago. 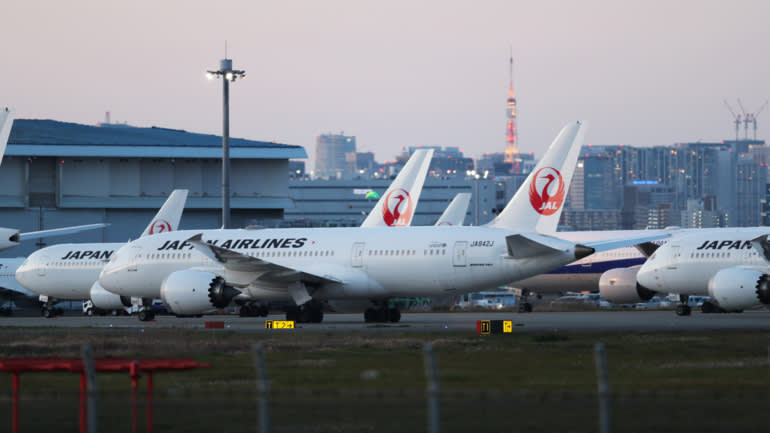 Domestic bookings are recovering: on September 22, the end of a four-day long weekend, they reached almost 80% of last year's level. (Photo by Kei Higuchi)

The change of focus could mean a more prominent role for JAL-related companies that have leaner "low cost carrier" structures.

They include Zipair Tokyo, a wholly owned subsidiary that started in June but has so far had to run its flights between Tokyo's Narita Airport and Bangkok as well as Seoul on a cargo-only basis because of travel restrictions during the coronavirus pandemic.

JAL will "thoroughly build low-cost carrier networks" around Narita, one of its main hubs, Akasaka said. "We will support each other. ... JAL will help Jetstar Japan and Spring Airlines Japan for their survival."

Budget carriers are also struggling as discretionary travel slumps. Jetstar Japan, which halted all of its international flights and reduced more than half of its domestic flights, is promoting voluntary early retirement and furloughs to its nearly 600 pilots and flight attendants. Spring Airlines Japan posted a net loss for eight straight financial years until December 2019.

JAL, which filed for bankruptcy protection in January 2010 with liabilities of around 2.3 trillion yen, restructured using public funds. The airline cut almost 90 money-losing routes from fiscal 2006 to 2011 and shed nearly 16,000 employees before relisting on the Tokyo Stock Exchange less than three years after its bankruptcy.

The carrier was restricted from investing in new routes until 2017 as a condition of its bankruptcy protection, which left it lagging behind its main rival, ANA Holdings. Its path for expansion has now been further impeded by the coronavirus outbreak. It posted 93 billion yen ($880 million) of net loss for the April-to-June period.

Restoring business travel will take "several years to get back to the levels of 2019," and full-service carriers will be "left with the handicap of an inevitably higher cost base," said Peter Harbison, chairman emeritus of aviation research company CAPA.

"It is already the case that several large airlines with their own subsidiary LCCs are moving to enhance the role of the lower-cost operation. Given that the target market will for the next few years be predominantly leisure traffic, this trend is likely to continue," he added.

Hajime Tozaki, professor at Japan's J.F. Oberlin University and an aviation industry expert, said it would be difficult for a flagship carrier to tap the budget carrier model.

"Separating full-service and low-cost carriers under a same company group is challenging. Since there are always risks of cannibalization, it is normally difficult to launch drastic measures," he said, arguing that full-service carriers should remain geared to business travelers who will return once a vaccine has been developed. Akasaka emphasized that JAL's own cost-cutting will be indispensable but "in case [these measures] face limits, the [Japanese] government's support as safety-net could be under consideration," he said. (Photo by Manami Yamada)

Akasaka said JAL would stick to its strategy of trying to make Narita into a hub for flights connecting Southeast Asia and North America. "Making Narita a stopover hub, maybe together with ANA Holdings, could be crucial for us and also for Asian airlines," Akasaka emphasized.

Narita is regarded as an emerging hub for budget carriers. Tokyo's other main airport, Haneda, has been more in focus over recent years for business travel, with 50 new international slots allocated in March.

If 80% of domestic and 50% of international demand comes back by March 2021, the carrier can avoid huge financial losses, Akasaka argued. He emphasized that the carrier's own cost-cutting will be indispensable, but "in case [these measures] face limits, the government's support as [a] safety net could be under consideration," he argued.

"Providing public support means that [the government] is telling us to do whatever it takes to survive," Akasaka stressed.

Akasaka also suggested JAL would rethink its fleet renewal cycle. While JAL replaces nearly 10 aircraft every year, "hastening retirement of aged aircraft," including Boeing 777s, and "delaying introduction of new aircraft" could be a choice over the next two to three years, according to Akasaka.

JAL has secured a credit line of 500 billion yen and has raised 300 billion yen by borrowing from banks such as Mizuho and MUFG and selling some of its aircraft. Akasaka said in July the airline has enough funds to weather the next six months to one year.

Akasaka, however, denied the idea of cutting jobs or furloughing cabin crews.

Miho Yoshida, a flight attendant at JAL, is working on developing projects to revitalize the island of Kyushu, where she grew up. She applied for a position of "home ambassador" and started the new role from late August in Fukuoka, connecting local companies, authorities and JAL's related teams.

"Things have completely changed with little flights. ... But I'm just very excited imagining what I can do for the future of this local destination," she said.

Offering opportunities for new challenges to the company's employees is "responsible management," Akasaka stressed. "They are not surplus. Leaving them as surplus is something management should never be doing."

Akasaka said COVID-19 "has brought undeniably huge damage to Asia, as some carriers in the region were already suffering from fierce competition even before the outbreak."

Not only the scale of the government support differs according to country, some areas have very few or no domestic flights, like Hong Kong and Singapore. Some carriers are likely to disappear as a result, he said

"But after the rebound, those that have survived [this difficult time] will have big opportunities," Akasaka underlined.