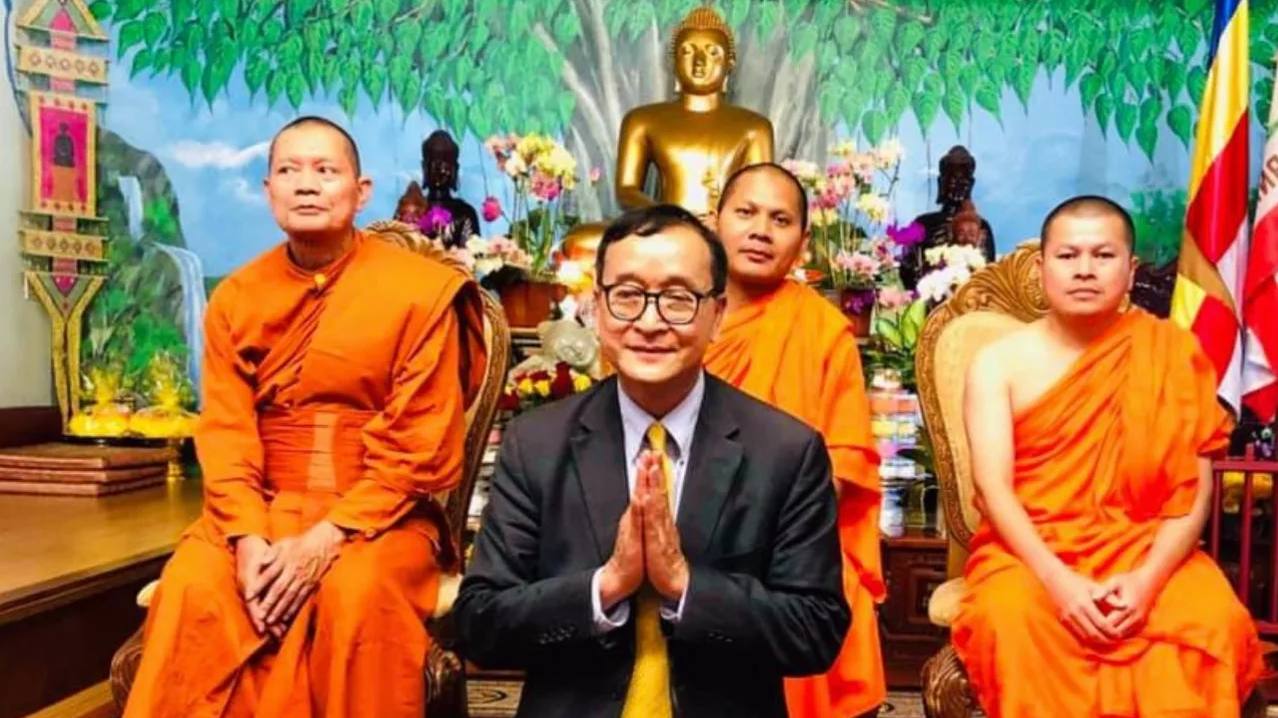 PHNOM PENH/TOKYO -- Amid mounting arrests of his supporters, Cambodian opposition leader Sam Rainsy has doubled down on a promise to return from self-imposed exile, vowing that at least a million people will take to the street upon his arrival.

"I will definitely return on Nov. 9," the acting president of the Cambodia National Rescue Party (CNRP) told the Nikkei Asian Review by phone from his home in France.

"I cannot elaborate on my plan, but I want my return to be successful, so I need to ensure that many people will be there to greet the return of me and the CNRP."

After four years in self-imposed exile, the leader of the banned opposition party has vowed to re-enter the country and lead a "people power" movement against Prime Minister Hun Sen.

The 70-year-old fled to France in 2015 to avoid arrest over a years-old defamation case that was widely seen as politically motivated. The government has since piled on an avalanche of charges and convictions, carrying potentially decades of prison time, as it pursues a wide-ranging crackdown against the opposition and other critics.

Already, Rainsy's vow to return has increased the stakes for his supporters.

In recent weeks, some three dozen people have been detained and charged with "plotting" against the state for purportedly helping to plan Rainsy's return. Hun Sen, in power for three decades, has pledged to deploy the military to suppress what he has labeled a "coup."

As the wave of arrests continues, Rainsy said he was "concerned about the safety of supporters" but said the "atmosphere of fear" would not deter his return. Thousands of Cambodians lined the streets to see Sam Rainsy in July 2013. The opposition leader fled the country for France in 2015.    © Reuters

Rainsy, who has failed to follow through on past promises to re-enter Cambodia, explicitly tied the success of his return to an overwhelming show of support. He challenged Hun Sen to allow people to travel freely to meet his entourage.

He called on Hun Sen to not arrest opposition leaders, to reinstate the CNRP and to call an election. He said he would delay the trip if the demands were met.

"That would save Hun Sen's face. This is clear, transparent, and a game worth playing," he said. "Let the people vote with their feet if they cannot vote with their hands through a ballot."

Hun Sen has given no indication of compromise. Speaking at a graduation ceremony on Oct. 7, he said he ordered the military to prevent CNRP leaders from returning. "Attack them wherever you see them. You don't need arrest warrants at all," he said, according to Radio Free Asia. In the wake of the election, the party claimed massive voting irregularities and led mass demonstrations for several months before they were violently suppressed.

With Rainsy abroad, CNRP co-founder Kem Sokha led the party to a surprisingly strong showing in the 2017 local elections. But Sokha was arrested in September 2017 on treason charges, with the government accusing him of plotting a "coup" with U.S. support. A few months later the CNRP was dissolved by the Supreme Court, and the CPP swept all 125 seats at the 2018 national election. Sokha remains under house arrest in Phnom Penh.

But as it continues to muzzle dissent, the government faces mounting pressure on multiple fronts.

In response to the crackdown, the European Union is considering whether to scrap trade preferences vital to Cambodia's economy. Hun Sen's ever-deeper ties to Beijing have brought a rush of Chinese investment, which has sparked local resentment. And the prime minister's attempt to advance his son as a successor could also ruffle feathers within the CPP elite. Sam Rainsy flashes a victory sign as he is forcibly removed by police while leading a protest outside a garment factory in Phnom Penh in 1997.   © Reuters

Astrid Noren-Nilsson, an associate senior lecturer at the Centre for East and Southeast Asian Studies at Sweden's Lund University, said Rainsy's vows to return had counterintuitively served to unify CPP elites against a renewed external threat.

"The presence of a common threat has worked to strengthen elite cohesion over the past few years, however, that threat is waning," Noren-Nilsson said. "Each reminder thereof, including the threatened return of Rainsy, reignites that dynamic."

Yet at the very least, the mere threat of the opposition leader's return had forced Hun Sen to show his hand, said Lao Mong Hay, a prominent political analyst and former adviser to Sokha.

"[If] you say that the overwhelming majority support you, then why do you bother? Get on with running the country," Mong Hay said. "Physically, yes, you have the army. You have the security forces. You can control the country. Why should you resort to threats and intimidation?"

Still, as arrests continue and Rainsy's devoted supporters put themselves in harm's way, the biggest question remains whether the opposition leader will buck a history of failed promises to return. While calling him a "political force to be reckoned with," Mong Hay said he wasn't ready to trust Rainsy just yet.

"Only when I see him, will I believe it," he said.