China-led AIIB to stay 'much leaner' than development bank peers

JAKARTA -- The China-led Asian Infrastructure Investment Bank is aiming to become a slimmer lending body than peers such as the World Bank and the Asian Development Bank, according to a senior AIIB executive.

Joachim von Amsberg, AIIB's vice president of policy and strategy, told the Nikkei Asian Review that rather than inflating its own staff numbers, the bank would seek to use partnerships to help Asia fill its substantial infrastructure financing gap.

The AIIB currently has about 300 employees, far fewer than the World Bank Group's 10,000-plus and the ADB, which has more than 3,300. Von Amsberg said in an interview in Jakarta that the lender envisages growing to employ "800 to 900" staff in the medium term, and is "very deliberately building capabilities and capacities," but added that it also plans to "stay much leaner than our peer institutions."

Some critics have blamed the shortage in staff for its sluggish lending. When the AIIB was founded in January 2016 it projected it to lend $10 billion to $15 billion annually in its first five or six years, but so far has only approved a total of $10 billion for 53 projects in just under three years.

Von Amsberg said the AIIB can afford to be leaner because it is building up its capabilities at a time when "there are many other partners out there that have very strong capabilities in our space."

"[We can] build our lean business model much more in partnerships, whether that's outsourcing partnerships or cofinancing with others, because we don't want to duplicate capabilities that are already out there," he said. "[That is] very different from the time ADB and World Bank were created, when these institutions were pretty much alone and had to build all capabilities in-house." 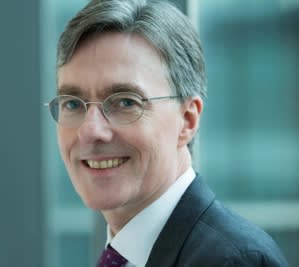 When AIIB was founded, questions were raised over its ties to the Belt and Road initiative and China's influence -- it is headquartered in Beijing and China is the largest shareholder with more than 25% of voting rights.

But since its formation, the AIIB has become an important source of infrastructure financing in Asia, which suffers from a chronic funding deficit. The ADB estimates there is a financing gap of $459 billion per year, or about 2.4% of developing Asia's gross domestic product, with the figure doubling when funding for social infrastructure such as health and education is added.

But notable absentees from its members list are the U.S. and Japan, which hold leading roles in the World Bank and ADB respectively.

The lender "will continue to maintain a posture of openness for any eligible country to join AIIB, and that of course includes the U.S. and Japan," von Amsberg said.

"Both countries made sovereign choices like any other countries, we respect that," he said. "They decided not to join in the beginning and we have no active discussion on them joining, but they will continue to be welcome."