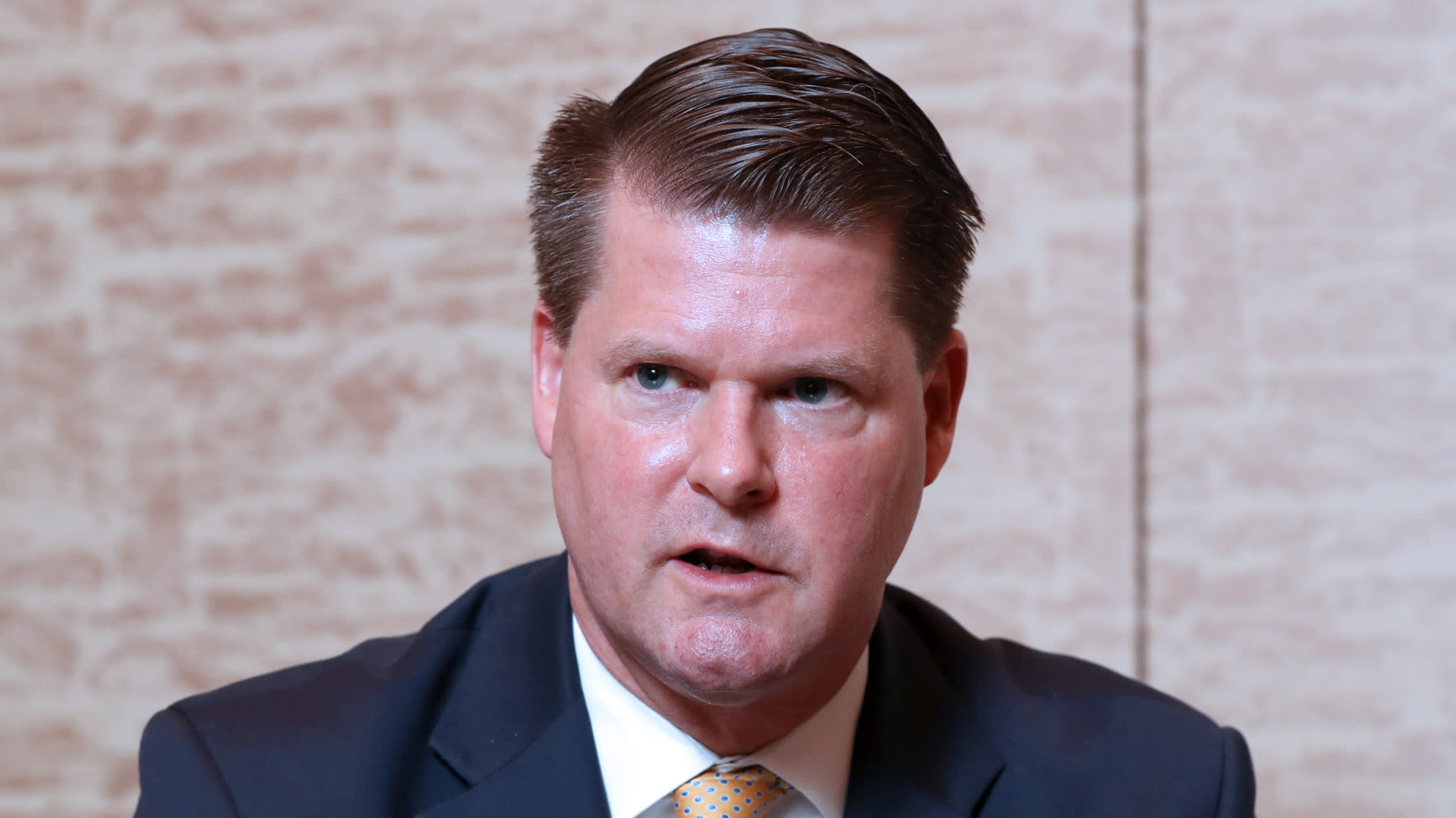 TOKYO -- China's massive military parade on its national day this month was a show of strength aimed at other global powers, but was also used domestically as cover for the nation's economic slowdown, according to a senior Pentagon official.

"China's economy is slowing and they're continuing to still spend significant amounts of money on their defense budget and military modernization, so I'm sure a part of that was for the internal audience as well," Randall Schriver, U.S. Assistant Secretary of Defense for Indo-Pacific affairs, said in an exclusive interview with the Nikkei Asian Review.

Schriver said that despite the frictions with Beijing, including the escalating trade war and U.S. sanctions over human rights abuses in Xinjiang, a complete decoupling from China would be "unrealistic and unwise."

He spoke hours after Vice President Mike Pence delivered a speech outlining the Trump administration's policy on China. Pence called out American companies for bending to Beijing's pressure over their stance on pro-democracy protests in Hong Kong.

Schriver said American businesses like Nike and the NBA are free to make their own decisions. "The comments of the vice president were simply made to add awareness," he said. "Companies may not be fully cognizant of the human rights situation because the Chinese do a very good job of suppressing information."

U.S. allies are also finding themselves caught between Washington and Beijing, particularly when the U.K. was considering using Huawei Technologies to build the country's 5G network infrastructure. But Schriver said the Huawei issue was not simply a choice between the U.S. and China.

"That's a choice between having a secure network and being able to continue reliable close communications with an ally, versus accepting more risk and vulnerability," Schriver said.

"But given the relationship between the company and the party and the state, given Chinese past practices when it comes to espionage, theft of technology and intellectual property, we should be very cautious and wary when it comes to countries making decisions to rely on Huawei or other Chinese entities for their 5G infrastructure networks." Military vehicles drive past Tiananmen Square during a military parade on the 70th anniversary of the founding of the People's Republic of China on Oct. 1   © Reuters

The Pentagon earlier this month created a new position of deputy assistant secretary of defense for China. Schriver said the appointment of Chad Sbragia "allows a level of focus that could not be achieved when China policy was lumped in with the rest of East Asia." He added that the new position should signal to China that the U.S. is "serious about competition," and to allies that "we are committed to the Indo-Pacific region and we are not disengaging."

But the rift between two treaty allies, Japan and South Korea, is a headache for the U.S. amid China's long-term military buildup and the North Korea missile threat. Because of this, Schriver is urging Seoul to renew an intelligence-sharing pact with Japan.

"We all work in political systems and have to deal with constraints imposed on us," Schriver said when asked whether he sensed frustration from his South Korean and Japanese counterparts over the standoff. "But I think military and security professionals understand the importance of trilateral cooperation."

Although the U.S. Department of Defense has maintained cooperation and exchanges of information with the South Korean and Japanese militaries, putting the U.S. in the middle as the messenger makes security decisions cumbersome, he said. "Particularly when we find ourselves in situations where we have minimal warning on missile launches and other military operations."

Schriver was in Tokyo to speak at a security symposium hosted by Nikkei and the Center for Strategic and International Studies, a Washington think tank. In a 20-minute speech, Kono laid out a plan to increase military coordination with Indo-Pacific countries, and focused on China's military buildup. He also heralded Japan's alliance with the U.S., which he called the "cornerstone of Japan's national security."

"Japan needs to keep a close eye on Chinese military moves with strong interest," he said. "Japan's vision of a free and open Indo-Pacific does not exclude any countries, not even China."

Perhaps alluding to U.S. President Donald Trump's insistence that Japan raise its financial contributions to the bilateral alliance, Kono called for the U.S. to return to the Trans-Pacific Partnership trade agreement.

"This alliance is strong, not because it's convenient for both of us, but because it's based on the values that the people of the two liberal democratic countries share," Kono said.

Contrasting the U.S. and Japan's values to China's state capitalism, Kono ended his address by returning to the challenge posed by China's rise.

"I still believe a real market economy and the middle class it creates can lead a country to democracy," he said. "We must fight any attempt to change the world order with power and coercion."