Bauhinia leader aims to bring private-sector experience into next cabinet 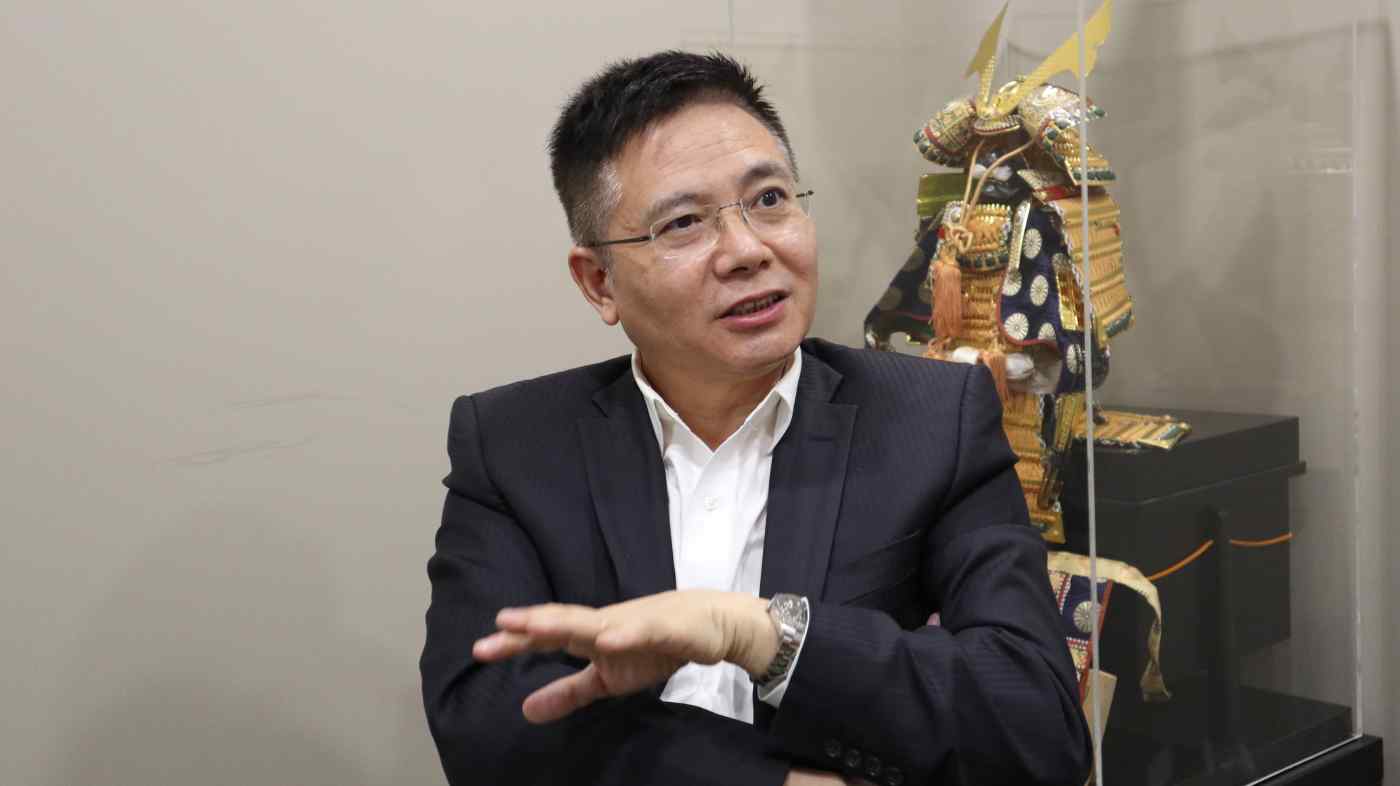 HONG KONG -- Over the past two years, anti-government protests and the coronavirus pandemic have pummeled Hong Kong's economy into its worst recession on record.

Amid this turmoil, a mainland Chinese-born banker argues his young political party can bring business expertise into bringing the city's government back on track.

Li Shan, who has spent nearly three decades in the financial industry and now serves on Credit Suisse's board of directors, says his pro-establishment Bauhinia Party is seeking cabinet positions and to eventually draw as many as 250,000 members from among Hong Kong's 7.5 million citizens.

"Financial sector experience is valuable to the governance of any place, and particularly so for Hong Kong because a cornerstone of our city is its position as a preeminent international finance center," Li told Nikkei Asia in an interview. "Maintaining this position is critical to the future of Hong Kong." Pro-establishment Hong Kong lawmaker Regina Ip at an anti-government protest in November 2019. "It takes a long time to build the trust of the people," she said.   © Reuters

"We are the top of bankers," said Li, who served as chief executive of Bank of China International Hong Kong from 2001 to 2005. "Hong Kong is a financial center and [banking] is the single most important sector."

Despite living in Hong Kong since the early 1990s, Li said he paid little attention to local politics until he saw businesses and residents flee the city after anti-government protests erupted in June 2019.

"If global financial institutions and talent exit Hong Kong, our city will fall from its position as a leading international financial center," he said. "Hong Kong people will bear the brunt of the consequences, and China will lose" an important hub.

Among the party's policy proposals: a public-private partnership to carry through a costly and controversial land reclamation project near Lantau Island and converting Hong Kong's Legislative Council into a bicameral body and the city into a "consultative democracy."

The party believes that securing an additional 50 years beyond 2047 of the "one country, two systems" framework, under which Beijing resumed control of Hong Kong from Britain in 1997, will be key to preserving Hong Kong's unique qualities.

Li hopes to win support for some of the party's proposals from the leading candidates in the city's next chief executive election, scheduled for March 2022.

"Our goal is for members of our party who contributed to the proposal or policy to be invited to join the government," Li said.

The Bauhinia Party's lofty goals have drawn skepticism and suspicion from both pro-establishment parties and pro-democracy advocates, however.

Eddie Chu, a former opposition lawmaker, speculated that the new party was composed of "underground Communist Party members" due to its ambitious membership target.

"The CCP is applying a governing system based on the mainland's model of installing party committees throughout Hong Kong society," Chu wrote on his Facebook page.

Ip Kwok-him, a local member of the National People's Congress and a co-founder of the Democratic Alliance for the Betterment and Progress of Hong Kong (DAB), Hong Kong's largest pro-Beijing party, said, "If they are confident [to get 250,000 members], then they can do it by themselves."

"It takes a long time to build the trust of the people," she said. "I don't think they understand politics at all. They probably thought they could run it like a business. Politics is not a business."

"Especially under the current political environment and social atmosphere, our experience tells us that it is not that easy to recruit members," he said.

By comparison, the DAB has more than 45,000 members, while the Liberal Party has several hundred.

Chung said that he is not concerned that the Bauhinia Party could threaten the position of the Liberal Party, given its founders' financial sector focus.

"They don't have connections with other business industries such retail, catering and textiles," he said. "[But] if you want to have breakthroughs, then [Beijing] must find some people with different backgrounds and some new faces to improve the image of the pro-establishment parties."

Chung believes the impact of the Bauhinia Party will depend on whether it is blessed by Beijing. If it appears to be the case, members of the committee which selects the city's chief executive could join or endorse the party which would give it sway in the vote and potentially a place in the next cabinet. Discontent with Hong Kong Chief Executive Carrie Lam's government is high, with 61.5% of respondents in a survey saying they were either "very dissatisfied" or "quite dissatisfied."   © Reuters

Li dismisses any suggestion that his party is receiving direct instructions from Beijing and insists it was established without consulting any official agency.

Still, as a member of the Chinese People's Political Consultative Conference, the national political advisory body, he has communicated with figures in Beijing and the central government's liaison office in Hong Kong.

As the new party begins focusing on recruitment, it starts from a membership base of less than 100, but Li notes the limited appeal of existing pro-government parties and remains hopeful of his long-term goal of 250,000 partisans.

"Despite some viewing this as a lofty goal, it is not mission impossible," he said, noting that the Chinese Communist Party has 100 million members. "We are confident that our belief in unity and the goal of securing another 50 years of 'one country, two systems' will attract many people" though he declined to discuss what benefits and obligations Bauhinia members will have.

He added that Bauhinia will not participate in September's Legislative Council elections given the body's limited role in initiating policy and his party's lack of readiness.

"In Hong Kong's governance structure, the chief executive and government, rather than the Legislative Council, take the lead in policy matters," he said.

The government's performance in containing the spread of the novel coronavirus in particular has come under criticism. Chung attributed this in part to a lack of private-sector experience. Lam herself was a career civil servant.

"They don't have a new mindset. They just stick to past rules," Chung said. "We need part of the [leadership] team to come from different professional or business backgrounds in order to make things work."

However, Johnny Lau Yui-siu, an independent political commentator, said it would be difficult for the Bauhinia Party to gain support among the general public because it consists mainly of financial sector elites.

But he believes that the background and experience of the new party's leaders could gives them better insight into Beijing's politics and the views of the central government's leaders.

"If they know how to utilize their ability, it will be easier for them to play edge ball within the framework of Beijing's policies," he said.