'Meaningful improvement in mobility and engagement' will be barometer, Robert Kaplan says 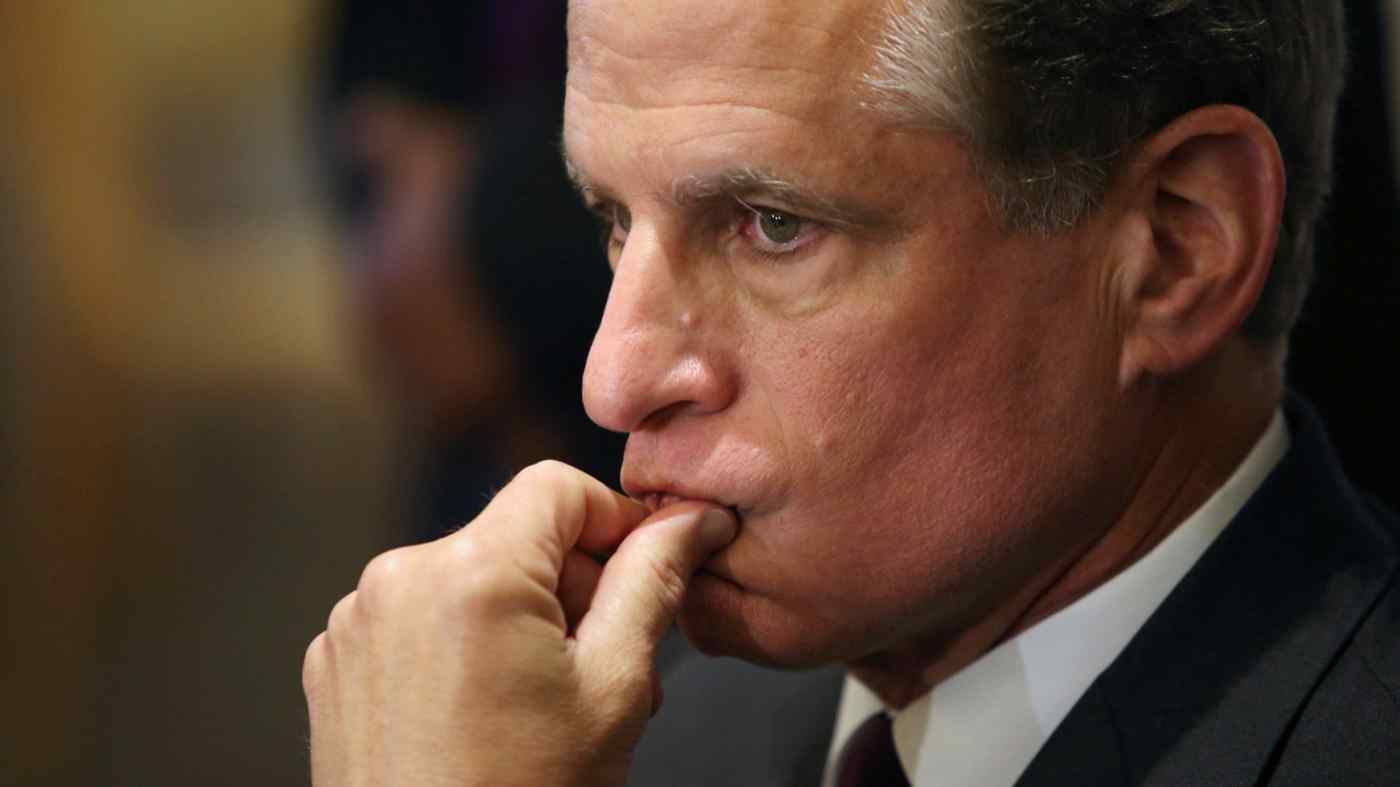 WASHINGTON -- Dallas Federal Reserve Bank President Robert Kaplan says that he takes a position "different than the median" among Fed officials on interest rate hikes and that he "will be advocating that we should be taking action" once benchmarks for employment and inflation are met.

In a recent telephone interview with Nikkei, Kaplan said his decisions will not be a "calendar-based judgment" but rather an outcome-based judgment. Yet he indirectly acknowledged being one of the four Fed officials who predicted that the first post-COVID-19 rate hike would come next year in the latest Fed "dot plot" of benchmark interest rate forecasts. A majority of Fed officials predict such action to come after 2024.

Q: How do you see the U.S. economy growing this year?

Kaplan: It's still 6.5% growth. That takes into account the $1.9 trillion package. It's our view, at the Dallas Fed, we will see some increase in prices in 2021. We've already seen evidence of that, and we think we'll see more evidence of that as the year goes on.

I think the jury's out on that, but our own forecast is that we'll have a surge in prices this year and it'll be much more muted in 2022 and 2023.

Q: Fed projections suggest 2.4% inflation at the end of this year. What's your take? 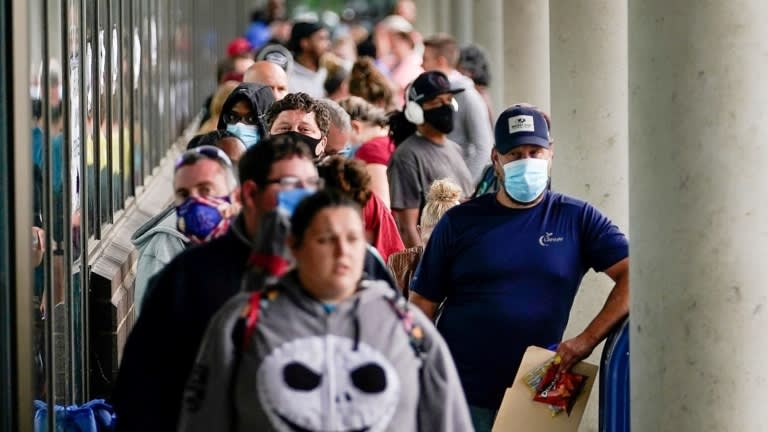 People line up outside a Kentucky Career Center in hopes of finding assistance with their unemployment claims in Frankfort, Kentucky, in June 2020.   © Reuters

Q: How about unemployment?

Kaplan: We think it'll approach 4% by the end of this year.

We look at the headline unemployment rate. We look at the participation rate. We look at something called "U-6" in the Bureau of Labor Statistics report, which is unemployment plus workers who were working part time who would rather work full time, plus "discouraged workers," who have given up and left the workforce. We'll be tracking U-6 very carefully to see what improvements are made.

Q: Turning to policy, there were four dots in the most recent Fed "dot plot" interest rate forecast representing officials who projected an interest rate hike in 2022. Are you one of those dots?

Kaplan: Let's put it this way: I have a policy recommendation that is different than the median. OK? It's dependent, though, on economic outcomes, and the judgment is: "When will we achieve full employment, meet or exceed 2% inflation, and be on track to run moderately above 2% for some time?"

We're going to have to see when that it is. When I believe that we are meeting those tests, in the future, whenever that is, I will be advocating that we should be taking action.

The dot plot asks you to put down a date. That view could easily change a month from now, two months from now, three months from now. I'm sure it will, based on my continuing assessments of what are likely economic outcomes. Q: How about the unwinding of asset purchase programs before interest rate hikes?

Kaplan: It's not a calendar-based judgment; it's outcome-based, and our outcome benchmark we've set is that we want to see substantial further progress in meeting our dual-mandate objectives. I don't know exactly when that will be, but that's the benchmark that I'm going to be looking for. And, when I see it, I'll be arguing, then, for taking action.

Q: What are the conditions needed for such tapering?

Kaplan: I want to see evidence that we've weathered the pandemic. What does that mean? I would like to see meaningful improvement in mobility and engagement. I'd like to start seeing meaningful job growth, evidence that we are making real progress on lowering the unemployment rate. And firming of inflation toward our goal.

The judgment part of it will be: "For how many months in a row, how consistently do I want to see that progress and to what extent?" And that's a judgment I'll have to make.

Q: As we get closer to a shift in monetary policy, one of the concerns in the market will be rising long-term rates. How will that impact the huge debt acquired by both the public and private sectors?

Kaplan: For the month or two leading up to the pandemic, the 10-year Treasury in the United States was in the range of 1.75% to 2%. As the economy improves, it wouldn't surprise me, at least, for the 10-year rate, to migrate up toward those levels. That wouldn't be alarming to me. It would be consistent with improved economic growth and improved prospects for economic growth.

Yes, it's true that we've got a substantial amount of government debt and corporate debt, but I think what would also come with somewhat higher rates is improved GDP growth, improved business profits, and cash flow that would help service that debt. So, we'll just have to assess it.

I've said many times before that I think the path of U.S. government debt to GDP is going to need to moderate in the years ahead, and I still think that's true. But I think, if rates are going up because GDP is going up and unemployment is going down, business profits are improving, and cash flow available to service debt is improving, that's still, I think, going to be a positive scenario.

Q: Any fears of a bubble forming?

Kaplan: Equity market cap, divided by gross domestic product, that's at a historically elevated level. Credit spreads, in the corporate bond markets, are at, relatively speaking, historically tight levels. There's no question that financial assets, broadly, are at elevated valuation levels. Is that something I watch carefully? It is.

Q: The Fed was discussing the effectiveness of yield curve control. Is that an option if long-term interest rates go up?

Kaplan: On the one hand I wouldn't rule out any policy options. On the other hand, I, for one, would be very, very hesitant about taking that action, unless there were extraordinary circumstances or very unusual circumstances.

That would suggest, maybe, a disorderly behavior, rate behavior, in the bond market, for example. But by and large I would not be an advocate, unless something dramatic occurred and changed. I would, myself, not be an advocate of that type of action.

Here's why. If the economy is recovering, it's natural to think that market-determined rates will rise to more appropriate market levels. I wouldn't want to see us taking action that would distort the pricing signal and the market behavior of the Treasury curve, unless there was a very, very good reason to do that. I think we're much healthier and stronger by letting these rates gravitate to their natural market levels. 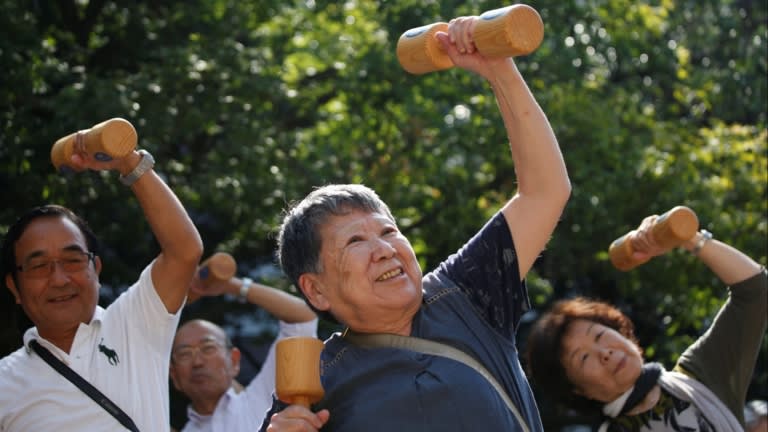 Older and middle-aged adults exercise with wooden dumbbells at a health promotion to mark Respect for the Aged Day at a temple in Tokyo's Sugamo district, an area popular among Japanese seniors.   © Reuters

Q: You lived in Japan, Tokyo, for five years. How do you see Japan's economic situation right now?

Kaplan: The No. 1 thing I think about is demographics. In particular, the aging of the population. And sluggish growth as a result of that, in the workforce.

GDP growth is made up of two things. Growth in the workforce and growth in productivity. Because of an aging population, workforce growth in Japan is very, very sluggish.

It's to the point where the aging issue is significant enough that you may even have a decline over the years in population. Not only will growth slow, but you may actually have a contraction in population.

That still, to me, is the No. 1 issue at the top of the list. But what are things Japan can do if it wants to grow faster? It can either do things that dramatically improve productivity, which I think it's trying to do, but it needs to find ways to grow the workforce.

And it's already done a number of them. It's done a good job of getting more women into the workforce.

But that still is the fundamental challenge, unless there's technology advancements, such that the growth in productivity is so dramatic that it more than makes up for sluggish workforce growth. But so far that just hasn't been the case.

Monetary policy in Japan has been aggressive, and creative, and done what it can, but in fairness to the central bank, they can't make up for the fact that the population is aging and workforce growth is slowing.

They've done everything they can, but it's not a substitute for fundamental structural changes.