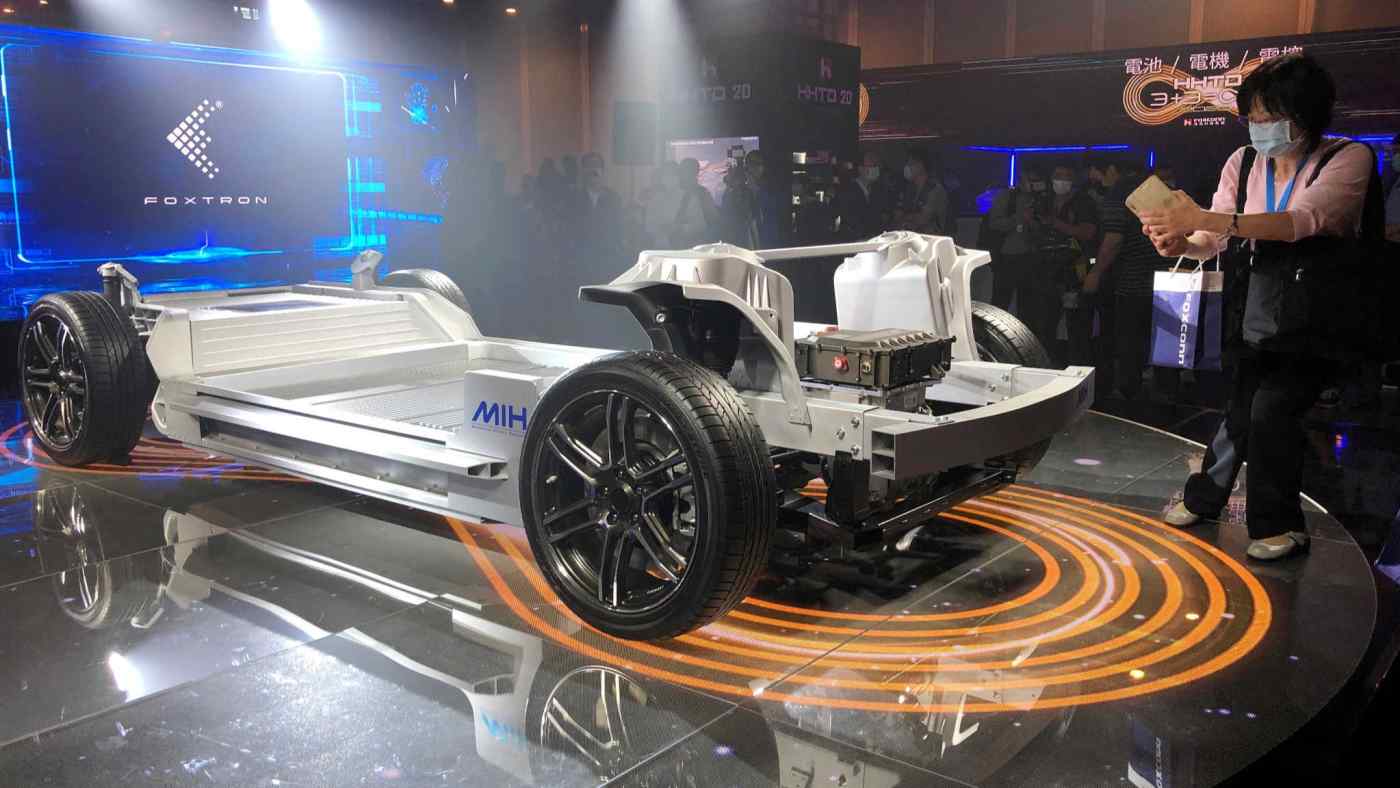 PALO ALTO, U.S. -- Electric vehicles are the "next big product" for iPhone assembler Foxconn and are "very, very likely" to grow into a bigger business than electronics, Chairman and CEO Young Liu said.

The Taiwanese group is weighing plans to produce electric vehicles in China and the U.S., entering a fast-growing segment of the auto market where tech players can compete with traditional automakers.

"With EVs, we have a chance to compete because there's no engine in the car anymore," Liu told Nikkei in a recent interview. "Without the engine, if you look at the key components for the powertrain, it's the motor drive plus many semiconductor components."

Foxconn, which trades as Hon Hai Precision Industry, first revealed plans to assemble electric vehicles for automakers last October. The company has set a goal of capturing a 10% share of the global EV market between 2025 and 2027.

But the world's biggest contract electronics manufacturer does not plan to replicate the business model that worked for smartphones and other devices. That approach concentrated factories in China and Taiwan, shipping electronics all over the world. "Automobiles are very big and difficult to ship," he said. "The shipping costs are much higher than shipping a cellphone."

Instead, Foxconn plans to concentrate production of motors in other core components in select places, including Taiwan. These parts will be shipped to vehicle assembly hubs in other parts of world.

Liu said the first Foxconn-made electric vehicle will likely be assembled in China under the local startup brand Byton. Foxconn has notified Byton that supplies will start next year.

The next electric vehicle will be for Fisker, a U.S. brand, and is likely to be made in America, said Liu. On Tuesday, the Foxconn CEO told reporters that Mexico is also a candidate site for EV manufacturing.

Last fall, Foxconn unveiled its own open EV platform, dubbed MIH, which it will offer to EV developers and sellers.

"With this open platform, we will be able to provide 80% of the hardware," said Liu.

The platform will lower the barrier to entry for new EV startups, as well as for small to midsized companies. By expanding the scope of its EV business beyond assembly, Foxconn looks to increase its opportunities to add value in the auto supply chain.

The Taiwanese group has shown its openness to working with outside partners in EVs, including Taiwanese automaker Yulon Motor. Foxconn plans to make MIH compatible with autonomous driving, an area where it has partnered Japanese startup Tier IV. Tier IV is playing a central role in developing an open-source operating system for autonomous driving, called Autoware.

Japanese automakers hold a roughly 30% global auto market share, but they have focused much of their efforts on fuel-efficient, low-emission gasoline engines and hybrid vehicles. Some see the worldwide shift toward electric vehicles as a threat.

Liu said he is conscious of the Japanese auto industry.

"For most of the traditional automakers, they are watching," he said. "We believe once we start delivering certain products based on MIH, they will become more serious."