HO CHI MINH CITY/ HANOI -- Europe has joined the growing number of economies urging Vietnam to resume international flights, as the country appears virtually free of the coronavirus and represents a strong investment destination for those seeking diverse supply chains.

Nicolas Audier, chairman of the European Chamber of Commerce in Vietnam, called on Hanoi to authorize and issue visas letting foreigners enter the country when he spoke with the Nikkei Asian Review in Ho Chi Minh City, the southern commercial hub of the communist-led country, on Friday.

Hanoi currently permits foreigners to leave Vietnam and allows the entry of commercial planes to gather passengers for return to Europe. But standard Europe-to-Vietnam flights are not expected to regain authorization until 2021.

The National Assembly in Hanoi approved a free trade deal with the European Union on June 8, making Vietnam the second Southeast Asian nation to have such a treaty with the European bloc after Singapore. The EU-Vietnam Free Trade Agreement is set to take effect as early as August.

"EU companies will consider Vietnam [as an investment target] now even more than before because of EVFTA," Giorgio Aliberti, EU Ambassador to Vietnam told Nikkei in another interview in Hanoi, soon after the approval of the free trade agreement. The agreement comes amid U.S.-China trade tensions. Once it takes effect, 71% of Vietnam's exports to the EU will become duty-free, as will 65% of shipments going the other way. Hanoi will phase out up to 99% of the remaining tariffs over 10 years; Brussels will do likewise but in seven years.

"COVID-19 and other elements will push people to think they should not focus too much on China but to diversify," Aliberti said. "I think it is a challenge to Vietnam but also an opportunity that they have to create a good business environment to facilitate, to attract foreign investment."

Said Audier, "Many companies will be exporting more to the U.S. through another country, and Vietnam is one of best countries [to invest in]."

"European enterprises have organized working via videoconference with Vietnamese partners, but many business experts and investors want to come to Vietnam physically for a few days, as they used to do," Audier said. Representatives from major European companies "would stay two days in Vietnam, another day in Malaysia during their business trip, as they also have business in other countries in the region."

The EuroCham official cited the free trade deal and the Europe-Vietnam Investment Protection Agreement, which also won approval June 8. The country serves as the gateway into Southeast Asia for European enterprises, he said.

"EU parliament was smart enough to understand that Vietnam will be a crucial country, the most important country within ASEAN. So not today but in 2030, 2040 Vietnam will be one of the pillars of ASEAN, and ASEAN would be the pillar of Asia," Audier said. 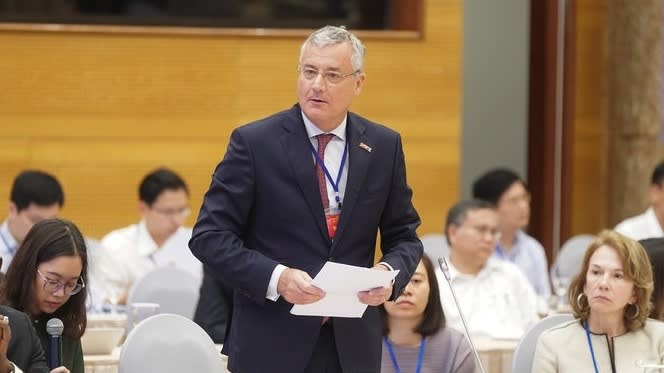 "If you want to leverage business, you need to open the border at some points" to allow a return to business, he said.

Demand from EU-based companies prompted Hanoi and the bloc to begin talks recently toward resuming flights for European cities including Paris, London and Frankfurt, but negotiations remain in an early stage as the continent continues fighting the pandemic.

Vietnam, by contrast, is among the fastest to reemerge from the virus. The country reported no new local infections for 68 straight days through Monday, with no deaths from the outbreak.

But Vietnam did announce seven new cases brought from Kuwait on Thursday, bring the total affected people to 342.

The country has become the most highly sought destination for international flights in Asia as economies recover from the coronavirus. Businesses in the region also are working to diversify supply chains, which have relied heavily on China, as Sino-U.S. tensions pose risks to operations. Hanoi is hearing calls from South Korea, Japan, Thailand and Australia to resume flights, which would pave the way for a gradual expansion of trade and tourism.

"Vietnam is talking with China, South Korea and Japan about reconnecting flights as the countries are among the first economies that have put the pandemic under control at home," Foreign Affairs Ministry spokeswoman Le Thi Thu Hang said Thursday.

These countries are major economic partners of Vietnam, she said, and they host many Vietnamese guest workers.

Vietnamese authorities and airlines are close to resuming routes with Seoul, Guangzhou, Taiwan, Laos, and Tokyo after a series of bilateral negotiations. Flights between Vietnam and Singapore also are expected to resume soon.

Bamboo Airways plans to restart flights connecting Hanoi and Ho Chi Minh City with Seoul, Tokyo and Beijing in July, the Vietnamese budget airline said on its website June 16. Bamboo also plans flights next month to Munich, Prague and the Australian cities of Brisbane and Melbourne.

Local travel agents have begun advertising Vietjet Aviation flights for July to Taipei from Hanoi and Ho Chi Minh City. Vietnam Airlines flights out of the country to South Korea, Taiwan, Hong Kong, Thailand, Singapore, Laos and Cambodia are also in the pipeline.

Yet, Vietnam remains cautious about fully reopening airports to foreign cities as the country braces for a possible second wave of the pandemic.

Hanoi shows hesitation on declaring an end to the coronavirus in the country.

Sustaining growth after the virus is crucial for the Hanoi government as the nation prepares for the Communist Party of Vietnam's convention in January, at which a new leadership lineup for the next five years will be confirmed. Resuming international flights plays a key role in achieving the growth targets.

"The ability to contain the virus to ensure that factories can run smoothly and key foreign personnel can enter the country means that the level of investment in the country will likely rise after COVID-19 as the Vietnam brand gets a lift as a place to do business," Trinh Nguyen, an economist at French-based researcher Natixis, said in a report last month.

"Foreign direct investment is not something that happens overnight," Aliberti said. "You have to wait."

Still, he thinks Vietnamese officials can help in this regard. "When [potential investors] come here, they see long procedures," Aliberti said. "I think the Vietnamese government is aware of the situation and trying to do their best. But I think more can be done."