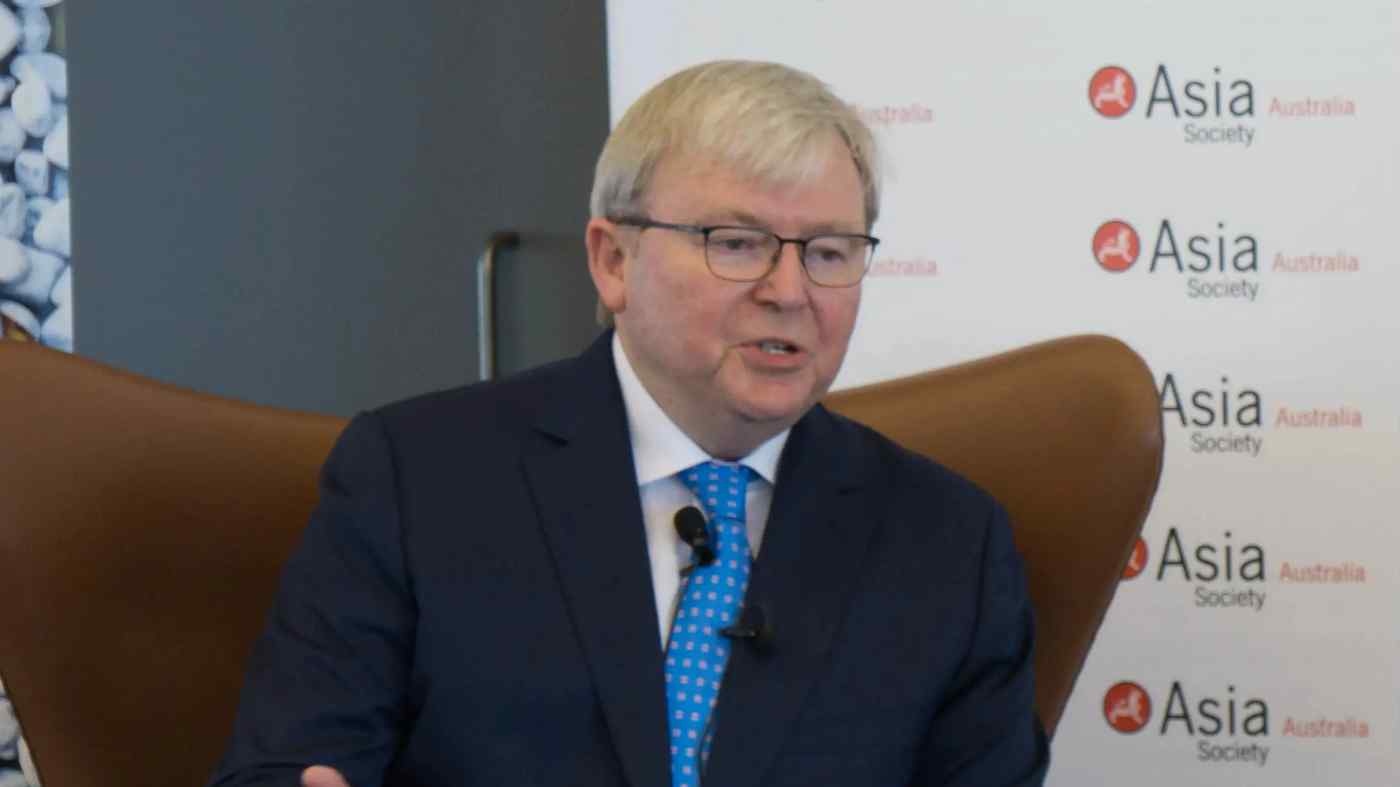 SYDNEY -- No early end is in sight to the dispute between the U.S. and China over the methods Beijing uses to promote its domestic industries, former Australian Prime Minister Kevin Rudd told Nikkei in a recent interview.

The bilateral trade talks are unlikely to lead to a deal over what Washington says are unfair Chinese policies concerning technology and intellectual property, and its ambitious plan to become a manufacturing superpower. With U.S. ties badly strained, Beijing will seek to improve relations with Japan and other countries in East Asia, Rudd predicted.

The diplomat-turned politician, who was Australia's prime minister from 2007 to 2010, and again briefly in 2013, is fluent in Mandarin and a recognized expert on China. He is president of the Asia Society Policy Institute, an international think tank specializing in policy issues related to the Asia-Pacific region.

Rudd said the problem closest at hand will probably be settled. "First, I think you are going to see a strong effort to resolve the tariff and trade war between the U.S. and China, which at this stage [it] is likely ... a solution will be found."

But the two giants will probably be unable to resolve deeper problems at the heart of the increasingly acrimonious feud, Rudd said.

"It is much less probable that a solution will be found to the much more systemic problems in the economic relationship around technology, intellectual property and China 2025," he said, referring to Beijing's "Made in China 2025" strategy for gaining manufacturing supremacy. "These will remain fundamentally destabilizing factors in the relationship."

The former prime minister pointed to the hard-line stance taken by the administration of U.S. President Donald Trump toward China not only on trade but on a wide range of security and foreign policy issues. "The Chinese have reached the conclusion that this is not just a Trump factor, it is administration-wide. It's not just trade, it's the wider economy. It's security, it's also foreign policy, and it's also human rights."

The U.S. Justice Department investigation into the Trump campaign's ties to Russia during the 2016 presidential election may affect the Washington-Beijing trade tussle, Rudd predicted. "If Trump, during 2019, comes under a large amount of pressure because of [special counsel Robert] Mueller, and that political pressure is about Trump being weak towards the Russians, then we should be very alert to the possibility that Trump will ... double down against China in order to demonstrate that he is strong on national security," Rudd said.

As for China's Belt and Road Initiative, a giant international infrastructure-building project that critics say will leave participants in a debt trap that forces concessions to China, Rudd said Beijing will try to deflect criticism by increasing transparency.

"It will seek to reduce the amount of pressure that China is currently facing around its periphery, not just Japan, not just Southeast Asia, not just India, but also through some reappraisal, even of [the initiative] to perhaps make it more internationally transparent, to make it more financially sustainable for the Chinese -- even possibly to invite Japanese participation as [Japanese Prime Minister Shinzo] Abe and [Chinese President] Xi [Jinping] may have already discussed."

Rudd cited uncertainty about the future of the U.S. role as the region's main strategic challenge. "The problem is neither Japan nor Australia nor other countries can predict the future reliability of the United States in the wider strategic development of the Asia-Pacific region," he said.

"It's an open question where Trump's America could take the U.S. long-term strategy in Asia. That's why Abe-san, I think, is hedging [with] Beijing; that's why [Indian Prime Minister Narendra] Modi and Delhi are hedging; that's why I think other leaders in Southeast Asia are hedging -- because they don't know where America will be in the long-term future."

Rudd stressed the importance of using existing frameworks to enhance regional security cooperation involving the U.S. and China. "For example, we should take existing regional institutions, such as the East Asia Summit, and make [them] into a more robust regional institution capable of ... promoting security policy collaboration between the great powers of East Asia and the Indo-Pacific region, rather than simply allowing the region to turn into a bipolar theater, with China in one quarter and America in the other."

Referring to the Trans-Pacific Partnership, a multilateral trade agreement from which the U.S. has withdrawn, Rudd lauded Tokyo's efforts to keep it from unraveling and called for opening the door to China and the U.S. without compromising the high levels of trade liberalization the renegotiated pact represents.

"In terms of regional free trade, Abe-san has been very effective at keeping alive the TPP, and he has brought other strategic partners around the table. This is very good to see. Australia is cooperating with that. We should also leave the door open to possible Chinese membership, if the Chinese want to come in, as well as keep the door open to the Americans, if they want to come in. But in both cases, it should be on high trade openness standards," Rudd said.