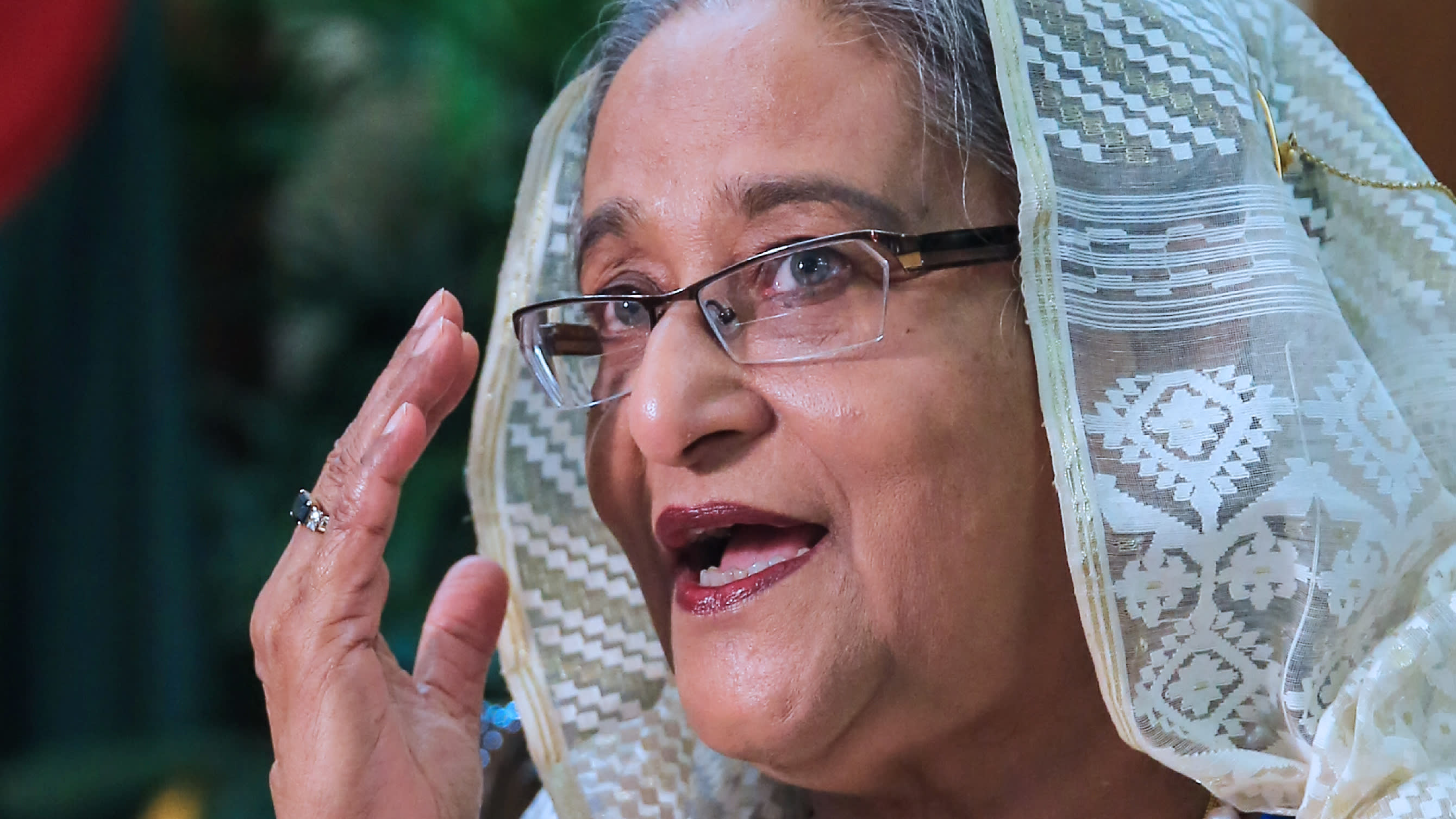 Bangladesh Prime Minister Sheikh Hasina predicts that her government will boost growth as high as 10% if she is re-elected this month. (Photo by Akira Kodaka)

Speaking in an exclusive interview with the Nikkei Asian Review ahead of a general election on Dec. 30, the 71-year-old leader said her nation will shed its "least developed country" status from 2024.

Hasina has overseen nearly a decade of consistent expansions of around 6% to 7%, with the economy growing 7.86% in real terms in the fiscal year that ended in June. The prime minister said growth is projected to accelerate to 8.25% this fiscal year and would continue to increase. "If elected, I can assure you that the program we have undertaken will get us up to 10% by 2021," she said.

The prime minister said Bangladesh could become Asia's fastest growing economy through a range of policies. One example she gave was the country's attempt to coax foreign companies to set up in a new network of 100 special economic zones. Currently 11 of the zones are now functioning and 79 are under construction.

The election will be a crucial test of Hasina's policies. The previous poll in 2014, in which her Awami League retained power, was boycotted by the Bangladesh National Party, the largest opposition group. The BNP, headed by jailed opposition leader Khaleda Zia, will participate this time, but opinion polls show that the Awami League is expected to win a large majority in the 300-seat parliament. The streets of Dhaka (Photo by Takaki Kashiwabara)

Hasina said Bangladesh will begin seeking bids for its second nuclear power plant project as soon as next year. The plant is part of Dhaka's efforts to expand and diversify the country's power supply amid its prolonged economic boom.

Natural gas accounts for 58% of Bangladesh's 17,340 megawatts of installed power generation capacity, according to the Bangladesh Power Development Board. But with domestic gas production declining, the country plans to significantly increase imports of liquefied natural gas as well as employ nuclear power and renewable energy to meet demand, which is growing by an estimated 10% annually.

Hasina has embarked on an ambitious infrastructure program since taking office in early 2009 -- she was also prime minister from 1996 to 2001. The number of power plants has grown to 121 from 27, while access to electricity has risen to 93% of the 166 million population from 47%. She has pledged 100% access by the middle of next year.

Russia and India are building the country's first nuclear plant in Rooppur in western Bangladesh. Hasina said that the facility's two reactors, with output capacity totaling 2,400 megawatts, "will start producing electricity [in] 2024."

As for the proposed second plant, "we are still searching for land," she said, adding that she hopes to build it in the south, one of the country's poorest regions.

She said Bangladesh will consider inviting proposals after the election, once the land is secured. China, which has stepped up involvement in Bangladesh in recent years under its flagship Belt and Road Initiative, has expressed interest in building the plant, according to local media reports.

Among the deals in Beijing's estimated $38 billion total investment in Bangladesh are $24 billion in bilateral assistance for infrastructure projects and $13.6 billion in joint ventures, China recently acquired a 25% stake in the Dhaka Stock Exchange after outbidding Indian rivals. Bangladesh is also one of the top importers of Chinese military hardware.

Stressing her country's "good relations" with all powers, Hasina said only that Dhaka would choose a proposal for the plant that is "suitable and comfortable for our country." Turning to the issue of the 800,000 or so Rohingya refugees who fled from Myanmar into Bangladesh from late 2016, Hasina brushed aside concerns that the situation would become an election issue.

She said Bangladeshis felt solidarity with the Rohingya after their own experiences in the independence war with Pakistan in 1971, when an estimated 10 million fled into neighboring India. Western estimates of the death toll range from 200,000 to 2 million people.

"I am very lucky that people trusted me, when I called upon my people to recognize their suffering. If necessary, we will share our food. Our people accepted this," she said of Bangladesh taking in Rohingya refugees.

The two countries had agreed to commence repatriation of refugees in mid-November but these efforts stalled after the first group of returnees refused to leave. Hasina confirmed plans to relocate some refugees to new facilities on a nearby island, but rejected international concerns that the flood-prone island would be like a prison camp.

"It is a beautiful island, it is used by people to farm cattle. They can live in a better way there; children will get education, health care; we built a warehouse so we can deliver the relief. At this moment, we are preparing for 100,000. But we can take 1 million there," she said.

The prime minister repeated assurances that no refugee would be forced to return to Myanmar but called on other countries and multinational organizations to help resolve the issue. It is now the international community's turn to figure out "how to make Myanmar take back their people to their own country," she said.