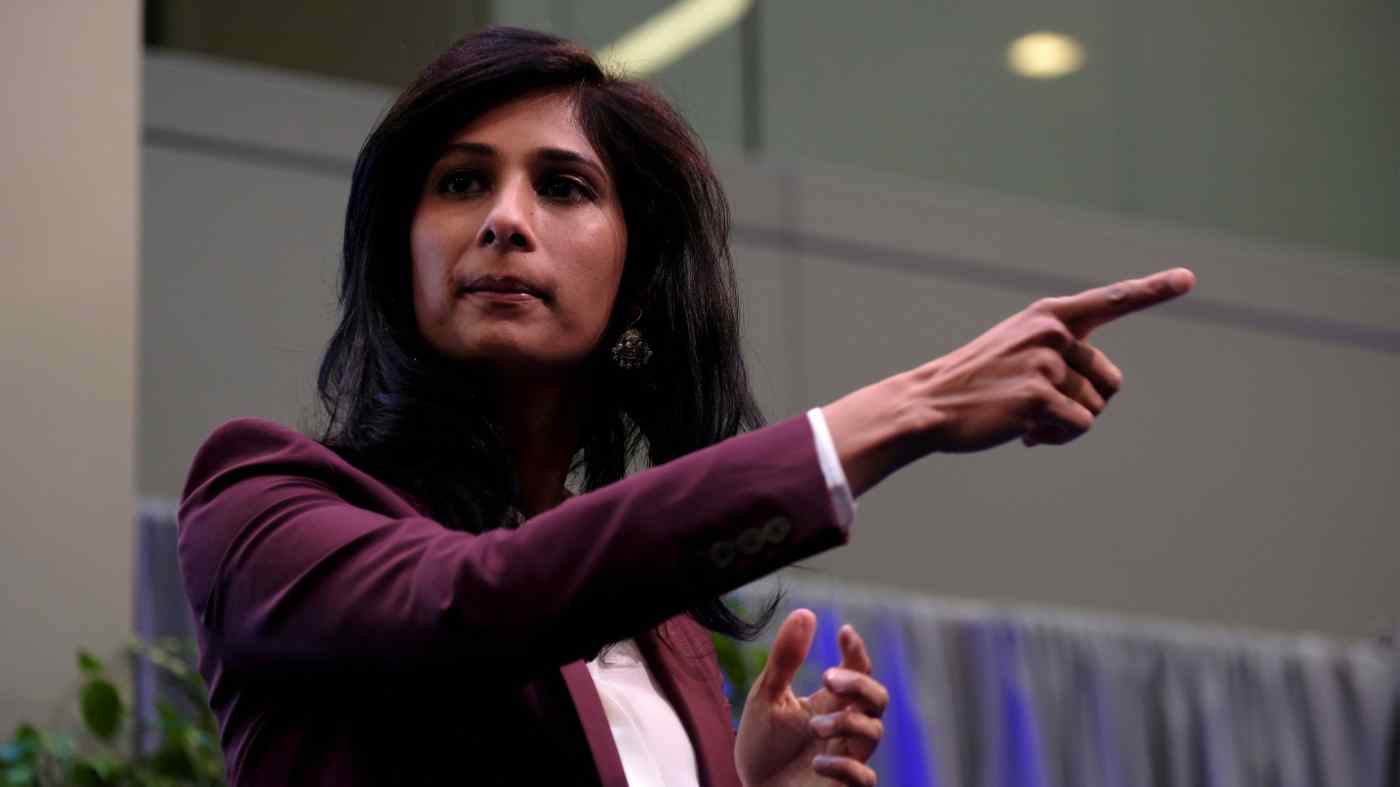 WASHINGTON -- The International Monetary Fund recently trimmed this year's global economic forecast as supply chain disruptions and inflation weigh down the recovery from the coronavirus pandemic.

But conditions are "nowhere close" to the 1970s-style stagflation, when stubbornly slow economic growth combines with high inflation, Gita Gopinath, the IMF's chief economist, told Nikkei. Although the global economy faces downside risks, inflation rates are expected to return to normal in the near term.

Gopinath also reiterated the IMF's position that China will be able to contain the crisis surrounding property giant China Evergrande Group. However, the effect of tighter U.S. monetary policy on the emerging world will depend on how smoothly the process goes, Gopinath said.

Q: Given the 0.1-point downgrade in the IMF's latest World Economic Outlook this week, is there any concern about so-called stagflation in the global economy?

A: We are projecting weaker momentum in growth in the global economy, and certainly higher pressures on inflation. But, that said, our global growth for this year is 5.9% and then 4.9% next year. So that is nowhere close to stagnation.

In the case of inflation, while inflation is elevated, the baseline is for inflation to come down to normal ranges by the middle of next year, for many countries.

So, I would say that the risks are tilted to the downside. But, at the same time, our projections are not of a world having to deal with stagflation.

Q: Inflation is lingering in the U.S. economy, and there is a significant slowdown in growth. Is there a risk that supply bottlenecks and high inflation will create a vicious cycle that will undermine demand and consumption there?

A: That is indeed a risk, which is that we are seeing supply disruptions that are then also leading to increases in prices.

So this is a very strong recovery for the U.S. economy, and it's quite the opposite of having to worry about what would happen if there's lots of weakness in the economy. So we are expecting to see a strong return.

Q: Is there any risk for the Federal Reserve to fall behind the curve in terms of higher inflation?

A: If you see the forces that have driven inflation, an important part of it is transitory in nature. Some of it is just because inflation was so low last year that we are seeing higher inflation this year. Some of it is the big increase in used car prices.

The Fed has a complex policy challenge ahead of them. Our advice is to be very ready, to make sure that, firstly, you clearly communicate [to the market] your expected path on inflation and how you would respond if it turns out to be much higher than expected.

Q: It is widely believed that the tightening by Chinese authorities on the real estate sector will lead to an economic slowdown. How would you respond to the claim that the IMF's 8% economic growth outlook for China is somewhat optimistic?

So, as of now, we incorporated that previously, which is why we did not have a big change this time around. We had only a small [0.1-point] downward revision.

But I would say that in terms of the risks to our forecast, that's certainly a risk to our forecast for China. The property sector is a very important part of the economy. Evergrande is the largest property developer in China.

If it turns out that the liquidity problems of Evergrande spill over to the real estate sector as a whole and have an effect, for instance, on housing prices, that could certainly slow down growth much more substantially.

But, as of now, we are of the view that the government has the tools and it has the policy space to be able to contain the spillovers from the troubles in the real estate sector.

Q: So you are basically not worried that the Evergrande problem will become a so-called second Lehman collapse?

A: For now, we certainly are not. We believe that China has the tools that they need, that they have the policy space that they need, to be able to ring-fence the problem and to prevent it from turning into a systemic crisis also into the financial system, which would then, of course, spill over to the rest of the world.

Q: The Fed will soon start tapering asset purchases and is eyeing rate hikes next year. Would that not be a further blow to emerging economies and low-income countries where recovery is lagging?

A: I believe it will depend on how smooth the Fed process is. If we have a very predictable slowing of asset purchases and a predictable increase in policy rates, then there will be a general increase in interest rates around the world. But I think the problems that that would create would not be severe.

The problem, of course, is that there are policy accidents, or we see data that inflation expectations are beginning to rise much faster than expected. Those kinds of events could then trigger faster-moving monetary policy tightening.

That could have negative spillovers to emerging and developing economies, especially those who are relying heavily on external financing for borrowing foreign currency, and don't have very deep trade relations with the U.S.