Goldman will learn and rebound from 1MDB scandal, says CEO NEW YORK -- Following revelations in 2018 of the company's involvement in the corruption scandal that engulfed a Malaysian state development fund, Goldman Sachs will work to rehabilitate itself this year, the 150th anniversary of its founding, CEO David Solomon told Nikkei.

The U.S. investment bank will apply the lessons learned from that incident in its future business in emerging markets, Solomon said.

Malaysian Prime Minister Mahathir Mohamad's government has indicated that it will pursue the responsibility of Goldman, where former bankers were accused of involvement in the misappropriation of money from the 1Malaysia Development Berhad fund, or 1MDB, during the previous government led by Najib Razak. Tensions flared in December, when Malaysian prosecutors indicted former Goldman bankers as well as a subsidiary for allegedly violating securities-related laws. Goldman reportedly was not granted a hearing before the charges were made.

On his apology to the Malaysian people last month, he explained that "what I apologized for was the fact that we had someone who worked at our firm who had become a partner of the firm" who committed crimes.

"There are other things that I've defended and I'll continue to defend," he said.

Solomon is known as an unconventional CEO, performing as a DJ at clubs in his spare time. He was dressed casually for this interview and was relaxed at the beginning, but his expression turned serious when the topic turned to 1MDB. 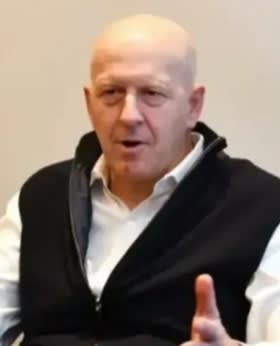 Goldman Sachs CEO David Solomon speaks to Nikkei in an interview at the company's headquarters in New York. (Photo by Emily Hey)

Goldman served as the Malaysian state fund's underwriter in 2012 and 2013, earning about $600 million in fees from bond issues. Although a portion of money raised was embezzled and used as bribes, Goldman has denied involvement or responsibility on the part of the bank itself in the scandal. Goldman's argument has been that it could not discover the wrongdoing because rogue bankers repeatedly lied to in-house personnel tasked with screening the transactions.

Malaysian and American authorities continue to investigate the 1MDB scandal, so all the facts are not known yet. Still, it has become clear that Goldman failed to catch wrongdoing by its personnel and allowed one of the largest financial scandals ever to occur. Billions of dollars were allegedly swindled, according to reports.

"[We have been] pretty consistent throughout this period about asking our partners to reflect and think about how we could do things better," Solomon said.

After getting battered by the 2008 global financial crisis, Goldman began focusing on emerging markets in pursuit of growth. In November 2010, then-CEO Lloyd Blankfein noted that sovereign wealth funds were promising clients. One of the slides used in his presentation showed the number of employees engaged in the emerging markets business in Asia growing about 30% a year. Goldman might not have been able to put compliance and risk management systems in place to match the rapid expansion of its emerging-markets business.

"We continue to examine our business practices as we deal with governments, particularly governments in what I'll call developing economies as opposed to more established developed economies like Japan or the United States," Solomon said. He noted that while there is no change in the strategy of growing the emerging-markets business, steps will be taken to prevent another scandal.

Solomon said Goldman will continue to invest in monitoring and surveillance systems. "I think the culture and the integrity of this organization is ... very strong," he said. "We have 40,000 people working here, we're going to do everything we can to make sure that, under our watch, the integrity of our people is as high as possible."

Goldman had underestimated the risks from a change in government. Its close relations with the Najib government backfired, as the Mahathir government went after Goldman with a vengeance.

"When governments change in other places" besides the U.S. or Japan, for example, "governments really change," Solomon said.

"We continue to do business in developing economies -- that's part of what Goldman Sachs does," he said. "But we'll do it through a different lens based on the experience we had."