Google is too big to innovate, Peter Thiel says

Billionaire slams Silicon Valley for overpromising and underdelivering on change Thiel sat down with Nikkei recently in Japan to share what he sees in his own palantir -- the crystal ball from "The Lord of the Rings" that his company is named after.

"Silicon Valley has been focused on fairly simple kinds of products" that can grow very quickly into successful businesses, Thiel said.

"People haven't had to do things that are complicated or difficult," he said.

Thiel expressed frustration with Silicon Valley's narrow focus on mobile phones, the internet, data and computers. "There are many other dimensions of progress that have been ignored," he said. "Supersonic airplanes, underwater cities, the Green Revolution, agriculture, new medicines."

"There are all kinds of ways that we could transform the world that do not involve just data" and are "quite important," he said. "I think we're not doing enough in those areas." Peter Thiel told Nikkei that the biggest companies are not necessarily the most innovative. (Photo by Hiroyuki Kobayashi)

Thiel pointed to inadequate innovation as part of the reason that Big Tech companies -- such as Google, Apple, Facebook and Amazon.com -- are under fire over control of data, violations of privacy, and worsening of inequalities.

"I think one of the challenges is that the big Silicon Valley companies have promised a lot in terms of how much technology will change the world and will make it better," he said. "And there's a question how much of this they've delivered," he added.

"There was something wrong with the Silicon Valley propaganda," he said.

"If you have a very big company, it's not always the most innovative," he said.

Thiel thinks that new startups should focus on areas with few rivals that they could eventually dominate. Such companies often end up becoming giants in their fields. His own Palantir is a prime example.

Palantir will soon launch operations in Japan through a joint venture with insurer Sompo Holdings.

As an investor, Thiel is constantly on the lookout for new small businesses. "I try to find unique companies with visionary founders that are solving problems that have not been solved before," he said.

"The longevity/health space is always very interesting" because "it's sort of dramatic and visceral," Thiel said. We've been fighting cancer 50 years and made "very little progress," he added.

Thiel was the first outside investor in Facebook and retains a seat on its board. It is through this perspective as an investor that he sympathizes with SoftBank Group CEO Masayoshi Son. 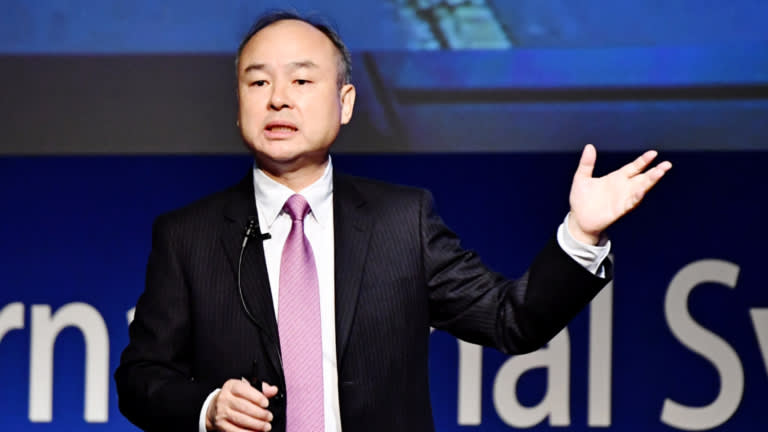 SoftBank chief Masayoshi Son speaks at an event in Tokyo on Dec. 17. (Photo by Shihoko Nakaoka)

Perhaps WeWork was too aggressive and not focused enough on the business, and maybe it was "not enough tech" and "just a real estate company," he said. "And so there're all these criticisms one can make of it after the fact. On the other hand, I think there are also a lot of cases where we [are] not aggressive enough, we're not trying enough. We should be trying more."

"That's what I respect about SoftBank and Masa Son," Thiel said. "They've at least been trying a lot."

As a vocal supporter of U.S. President Donald Trump, Thiel is a black sheep among liberal-leaning Silicon Valley entrepreneurs. "My judgment is that the United States is not on the right track. ... The globalization project has not been working for the United States. And, President Trump was someone who both spoke about this, and maybe would disrupt the status quo a little bit," he explained.

In the Republican Party, Thiel said, "you're supposed to be very optimistic, you're supposed to say everything is great. America is the greatest, most wonderful country in the world. And at some point, that's just too, too removed from reality."

Thiel singled out stagnation as the main culprit for economic challenges facing the U.S. and Europe. "It's mainly that the younger generation as a whole is not doing better than their parents," he said.

On what he called "left-wing socialist" arguments for wealth redistribution by the likes of Sens. Elizabeth Warren and Bernie Sanders, he said that "we have political institutions that do not work terribly well."

"We have a government in California, where I live, or the United States, that's extraordinarily bad at spending money," said Thiel, who pointed to shortcomings in his state's public schools.

"I always say that, you know, I would be fine paying more in taxes, if the government was better at spending the money," he said.