Chris Yeo, head of investment arm Grab Ventures, said in an interview with the Nikkei Asian Review that the Singapore-based company plans to make two to four new strategic investments in startups every year, targeting companies at Series B or higher fundraising stages. Most of these deals will be for minority stakes.

Separately, Grab is "actively looking out for potential acquisitions as well," he said.

Unlike SoftBank's nearly $100 billion Vision Fund, which invests globally, Grab will focus on advancing its strategy of becoming the region's super app, including services such as food delivery and digital payments.

"The main reason for the investments must be synergies [with existing business]," Yeo said. "Of course, financially it must make sense, but that's not the first and the most important."

Born in 2012, Grab now operates in eight Southeast Asian countries and has raised billions of dollars from global enterprises including SoftBank Group and Toyota Motor. On Monday, Grab said it will invest $2 billion in Indonesia over the next five years to tap opportunities in the region's biggest economy.

In terms of geography, Indonesia will remain the most important market, but Grab will look more at Vietnam and Malaysia as well because it sees "increased deal flow on potential opportunities" there, Yeo said.

"Just as a lot of bigger tech companies helped us back then, it's our turn to give back to the startup ecosystem," Yeo said. "When they...improve and grow bigger, we also benefit as a partner of the entire ecosystem."

While Grab makes investment decisions through an internal committee, it draws inspiration from SoftBank, Yeo said.

"What we learned from SoftBank is the type of sectors they invest in," he said. "They give us ideas from their portfolio companies globally, and then within the portfolio companies we share ideas and sometimes we talk about potential opportunities to do business together. So I think that's the inspiration we draw from them, in terms of the sectors they look at."

Southeast Asia's unicorns are increasingly investing in or acquiring other startups.

Company database Crunchbase says that 70 Southeast Asian startups were acquired by other businesses in the region during 2018, while 54 went under buyers from the rest of the world. Only seven of these fledgling enterprises took the path of initial public offerings.

The data shows a change from the early 2010s, when IPOs and acquisitions by companies from outside Southeast Asia accounted for most of the region's startup exits. 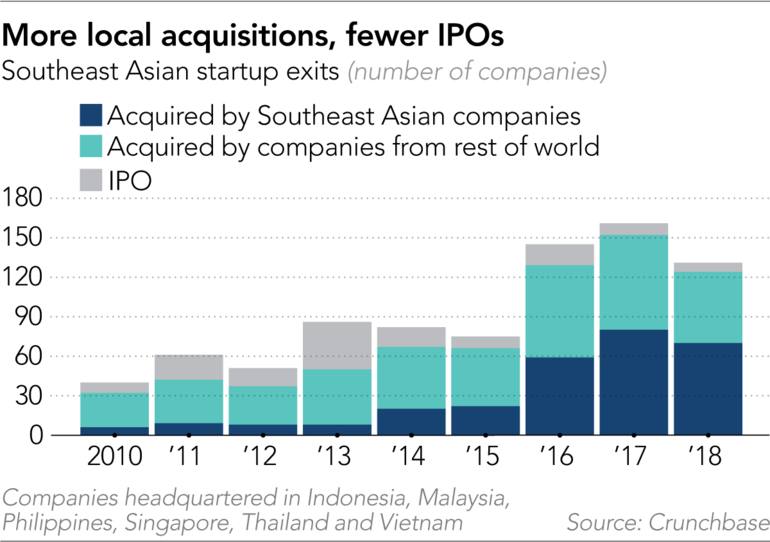 Grab's Yeo said this trend illustrates the evolution of the startup ecosystem in Southeast Asia.

"If you look 10 years ago in Southeast Asia, you don't have local startups investing [in other local startups], and then exits for startups will be an IPO or a buyout but not the local company," he said. "So the ability to have exits encourages more [venture] capital and more founders. We think it's a great thing for the ecosystem right now at this stage where a lot of the larger unicorns are able to start investing in the local companies."