Hong Kong e-commerce leader offers itself as ally against Amazon Hong Kong Television Network, the Hong Kong-listed operator of HKTVmall, will set up its first foreign operational base in Taiwan by the end of the year and another in Europe after that.

"We are going to sell our whole system to the world," Ricky Wong Wai-kay, co-founder and chief executive, told the Nikkei Asian Review in an interview. "Let any interested parties, operators [and] investors, if they want to fight against Amazon.com, we can provide total solution to them."

HKTV, which turned to e-commerce in 2015 after being denied a television broadcast license, has created a proprietary end-to-end online shopping business model from scratch in Hong Kong, where Amazon does not have a presence.

After muddling its way through and losing an aggregate of 1.7 billion Hong Kong dollars ($219.3 million) over the past five years, HKTV announced last month that it had turned a profit for the first six months of the year. On top of the steady investments made over the years, the company received an unexpected boost from pandemic-driven stay-at-home and social distancing policies. Its revenues more than doubled in the first half from a year earlier to HK$1.34 billion and it posted a net profit of HK$109 million, compared with a net loss of HK$155 million before.

Because turning a profit within just five years is rare in the e-commerce sector, Wong believes that "I can help [others] to establish a profitable business model."

He is targeting traditional shop owners, mall operators and investors, who realize the trend to spend online is going to accelerate with the "Amazon effect." To address that growth, he is looking to help businesses that lack the experience and know-how to shift their operations to cyberspace.

"We will export everything from software, hardware and engineering," Wong said.

The company wants to offer the system it has created, including warehouse management with automated product pickup and packing systems, logistics with last-mile delivery services and a whole digital ecosystem with website operations. The company is opening up its home operation in Hong Kong as "a live demo site" for interested parties.

"Now other competitors have to decide whether they want to wait and see, or to do it themselves without any experience, or come and work with us," said Wong, 58.

The new sites in Taiwan and Europe will act as the company's technical support centers. Taiwan was chosen because of its abundance of capable IT professionals and hardware engineers and the island's lower salary and operational costs compared with Hong Kong. The initial investment in Taiwan could vary between HK$40 million and HK$100 million, depending on the number of employees the company ends up hiring, Wong said. 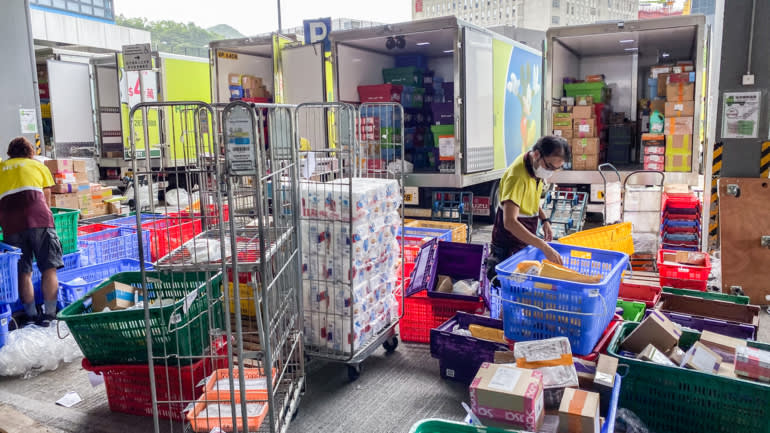 For the location of its European operation, Wong is still considering places including the Netherlands and Romania.

Wong said that his business expansion plans were partly inspired by Ocado, a U.K.-based online retailer, which has been exporting its business model abroad.

According to its first-half financial results, the British company has invoiced a total 73.7 million pounds ($95.2 million), or 58% more than a year earlier, from international partners who signed up to adopt its online grocery model. Cash received from this activity grew 42% to 59.7 million pounds, reflecting new contracts signed with Japan's Aeon Group and Coles Supermarkets Australia.

Although first-half revenue from this business was just 1.6 million pounds and it was loss-making in accounting terms because revenues are only recognized when the services go live, Ocado expects revenue to "continue to increase during the year as our international [customer fulfillment centers] commence operations," according to a company statement. It now has nine international partners.

Wong is one of the very few self-made tycoons in Hong Kong who built his fortune outside the property sector. He made a splash by challenging existing oligopolies in international calling and broadband services in the 1990s and 2000s.

After extensive preparations, Wong applied to run a free-to-air television station when licensing was opened up, but was rejected for vague reasons by the Hong Kong government in 2013. At that point, he had already sold his telecom business for HK$5 billion and changed his company's name from City Telecom (H.K.).

After years of trial and error, Wong thinks he has found a way to grow his business beyond Hong Kong, something that he was not able to do before.

"I would be confined to Hong Kong if I would have stayed in telecom," he said. The new business that he chose when his TV hopes were driven into a corner has given him the opportunity to expand abroad.

But as a serial entrepreneur, he is carefully choosing where to go. He is not looking at the Americas where Amazon is based and he is avoiding mainland China, where major players such as Alibaba Group Holding and JD.com are already well established.

"I don't see any opportunity for us [there]," Wong said.