Huawei to cut engineers in Australia and restructure after 5G ban SYDNEY -- Huawei Technologies is set to slash payroll in Australia after being shut out of the country's 5G networks, a company executive told Nikkei.

John Lord, chairman of Huawei Technologies (Australia), said the job cuts will take place over the next few years and will affect mainly engineers who the company "will not be able to keep as the business drops off."

While the world's largest telecom equipment maker saw its first-half revenue grow 23% from the same period a year earlier, Lord said Huawei's Australian sales increased but at a level below overall group sales.

In the year since the ban was announced, Australia has quietly begun building 5G networks without Huawei. Top wireless carrier Telstra launched the country's first 5G mobile service in May and has tens of thousands of subscribers in 10 major cities.

Lord said Huawei's consumer business "will do very well this year" as the drop-off hit bottom a few weeks ago. Still, he said, the business did not do "as well as it could have." 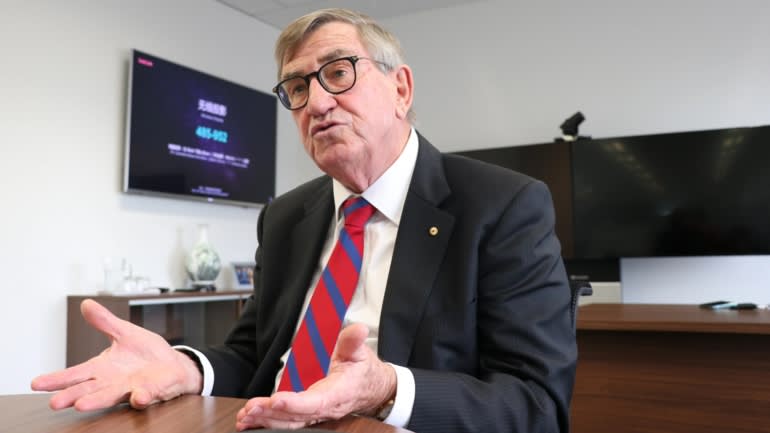 Currently, 70% of Huawei's business in Australia comes from supplying the country's mobile carriers. The company controls half of Australia's 4G wireless network service market, but this business will face a sharp decline when 5G networks take hold.

Despite the headwinds, Lord said Huawei will never leave Australia. "5G is not going to be rolled out quickly," he said. "So there's a chance to use other competitors in the future, so Huawei is staying."

In the meantime, the company will restructure its business and focus more on certain sectors that are "nonsensitive from a security aspect," Lord said.

Huawei is still looking for an opportunity to provide stand-alone 5G networks to certain businesses. The company has built stand-alone 4G LTE networks for gas operations. Lord said these networks have "no connection and no threat ... I hope that's open to us, but we have got to have those discussions with government."

Lord stressed that the ban has taken a toll not only on Huawei, but also on its partners like Optus and Vodafone Hutchison Australia. "It's really hit them quite hard -- one, in the pocket, and two, in their ability to develop future systems."

Australia was the first country to ban a company that was already involved in its wireless infrastructure market, said a frustrated Vodafone Hutchison Australia executive, who complained that the decision was made too quickly for carriers to adjust. Midtier player TPG Telecom cited the Huawei ban in its January decision to scrap its 5G plans.

Without Huawei, Australia will have two 5G equipment providers: Ericsson and Nokia.

Because of the decreased competition, "it's a bit more of a homogeneous market" among wireless carriers, said Liam Harrison, senior industry analyst at market research company IBISWorld.

"You can't, for example, go for the cheaper option, which was Huawei," Harrison said. "That was a potential market differentiator for some operators, so now without that option, it's a bit more difficult."

Lord said the meager competition will lead to an increase in subscription costs of between 15% and 30%. "We hope the Australian government changes its mind as it sees that it is falling behind in 5G," he said.

Huawei's Australian arm was among the subsidiaries that the U.S. added to its blacklist this week to prevent the company from accessing American-made parts through other group entities.