LONDON -- The executive director of Paris-based International Energy Agency Fatih Birol said that while China's goal to become carbon neutral before 2060 is "very welcome," there are as yet no policies to reach that target, in a telephone interview with Nikkei Asia.

President Xi Jinping announced at the U.N. General Assembly in September that China "aims to have carbon emissions peak before 2030 and achieve carbon neutrality before 2060."

China is the largest emitter of greenhouse gas, accounting for more than 30% of global emissions. In 2019, energy-related emissions were 9.7 billion tons.

Birol said that there are "two buts" in China's ambitious goal: "We have to see what kind of energy policies, and how and when the Chinese government will put in place to reach those targets," indicating that China must be monitored to ensure it meets its own target.

The coronavirus pandemic and the resultant mobility restrictions has led to a decline in global emissions this year. But in China, emissions are already reaching 2019 levels, given as the virus has come under control in the country and economic activity has resumed. Birol said: "[Their emissions have] already bounced back and came back to the level of the precrisis."

Energy research company Wood Mackenzie said that to achieve carbon neutrality by 2060, China would need to invest more than $5 trillion in renewable energy and decarbonization technologies in the transportation and industry sectors.

It estimates that renewables and storage capacities must increase 11-fold to 5,040 gigawatts by 2050. Furthermore, in one scenario, China would need to impose a carbon price of $109 per ton to accelerate decarbonization. Electric and fuel-cell vehicles need to replace those that run on gasoline.

The IEA released the World Energy Outlook 2020 on Tuesday that forecast a 7% fall in global emissions this year from the last, due to the pandemic. Even if the virus comes under control in 2021, global emissions will not rise above 2019 levels until 2027. 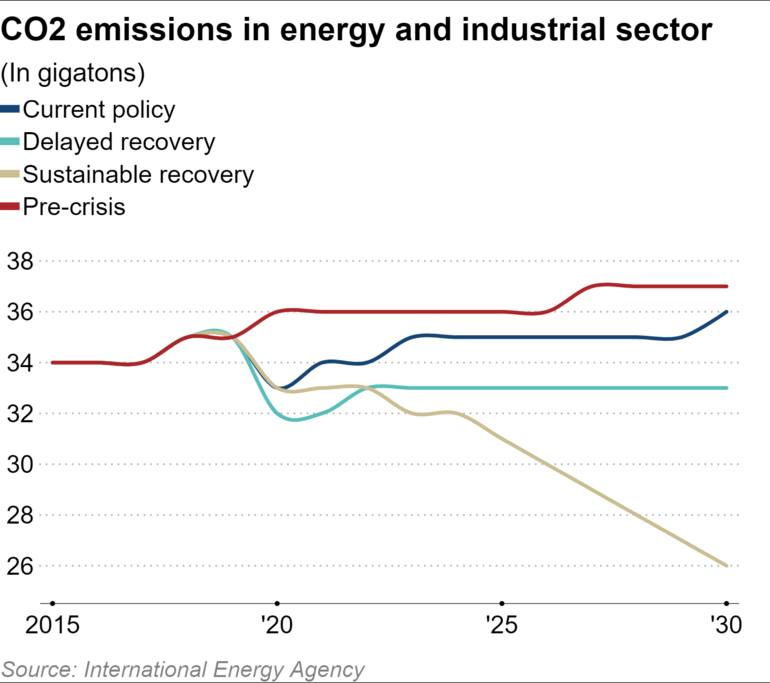 Global energy demand will fall 5% this year from the last, the energy watchdog said. If the COVID-19 outbreak has been reined in in 2021, oil demand around the world will rebound to 2019 levels in 2023. As of 2030, global oil demand will be two million barrels per day less than the pre-pandemic forecast. Oil demand will reach a plateau in the 2030s.

The report emphasized that "the economic downturn has temporarily suppressed emissions, but low economic growth is not a low-emissions strategy."

On the other hand, the world is way behind in paving a sustainable path to reverse climate change. According to another scenario in the report which reflects current policy intentions and goals by governments, even if the pandemic drags on, the targets set in the Paris Climate Accord will be missed. The report said: "The world is still well off track to address climate change and meet sustainable development goals."