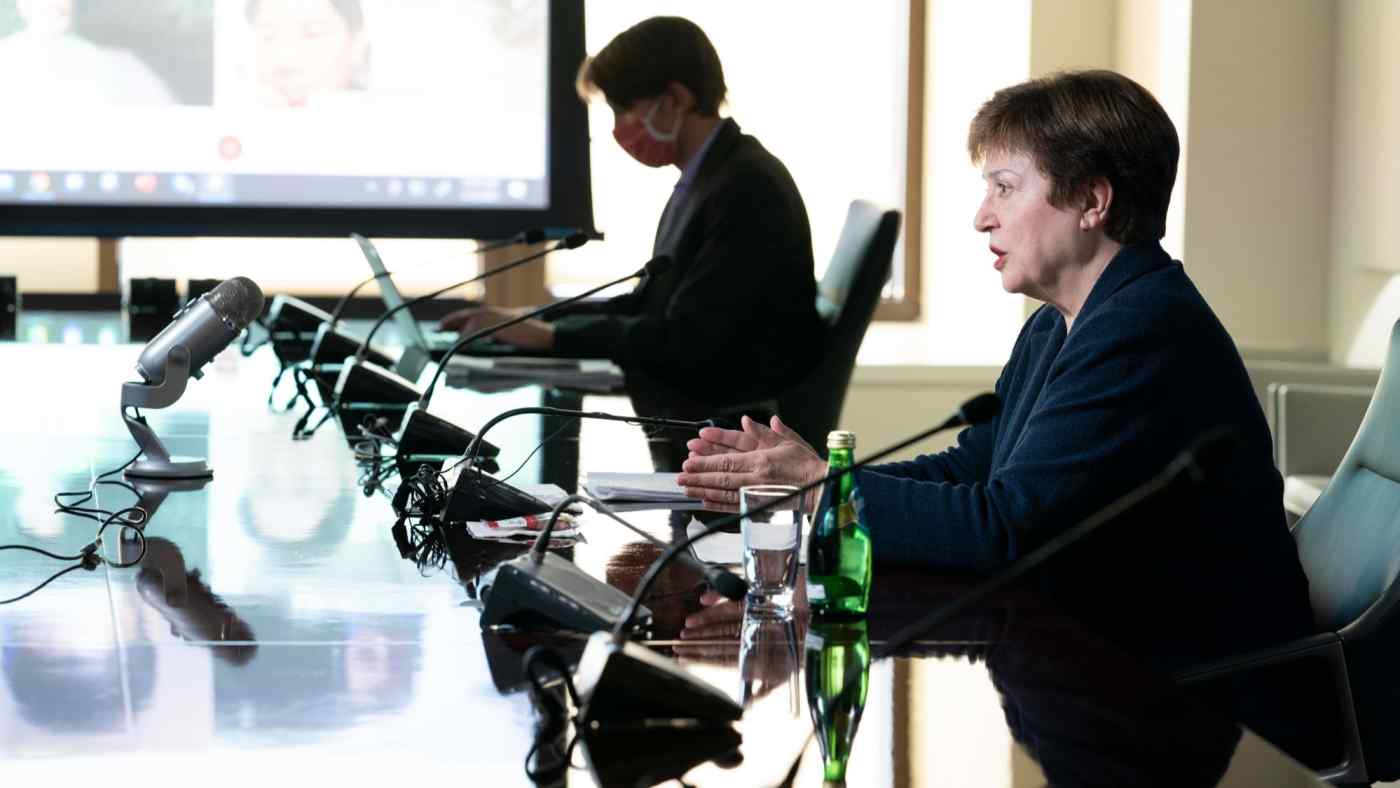 WASHINGTON -- Government spending, particularly in such areas as digital infrastructure and climate action, will be needed for a sustainable recovery from the coronavirus crisis, International Monetary Fund Managing Director Kristalina Georgieva said recently. Tackling debt and deficits -- the IMF's traditional recommendations -- can wait until the world reaches an exit from the health crisis, the Bulgarian chief said.

Fiscal and monetary policy measures by advanced economies have helped improve the outlook for this year, she said at a "virtual roundtable" with Nikkei and other global media outlets.

"We need to be clear -- 2020 is the worst year since the Great Depression," she noted. "But now, when we are stepping into 2021, the picture is less bad" thanks to economic stimulus along with adaptation to the "digital economy," including virtual meetings, and such steps as masks and social distancing that curb the spread of the new coronavirus.

But Georgieva stressed the need to pursue a "sustainable and inclusive recovery" and to address "inequalities within and across countries" that are on the rise amid the pandemic.

The organization is set to release its next World Economic Outlook with updated projections on Jan. 26. The last edition, published in October, projected that real gross domestic product would contract 4.4% in 2020 and rebound 5.2% in 2021. 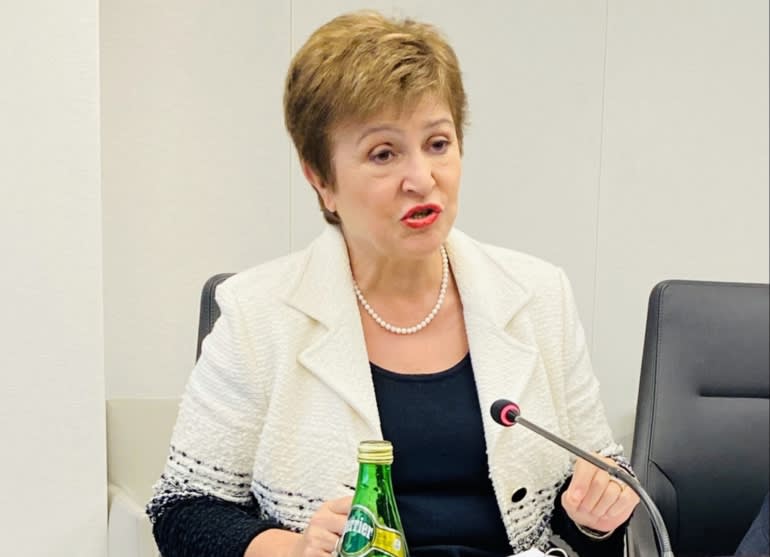 Georgieva calls 2020 the worst year since the Great Depression but believes that 2021 will be better.

Though the Japanese economy now faces downward pressure due to the state of emergency covering most of the country, Georgieva praised Tokyo alongside Washington for adjusting to "rapidly changing circumstances" by taking more stimulus measures as the pandemic worsened.

When contacted by Nikkei, the IMF said it predicts a gradual recovery for Japan in 2021, with growth probably somewhat higher than the 2.3% estimate in its October outlook.

Alongside the slightly brighter economic picture, however, Georgieva also warned of "scarring" and widening global disparities.

To deal with this challenge, she said, the IMF has been "advocating coordinated fiscal stimulus aimed largely at green and digital investment."

She pointed to climate action in particular as a "win-win-win." Such projects as building solar panels and renovating buildings to improve efficiency can create jobs while helping the planet and enabling individuals to be productive in the "new climate economy," she said.

Georgieva argued that the U.S. and China, the two largest engines of the global economy, both need more stimulus. Beijing can do more to transition to a low-carbon economy, while Washington has fiscal space to help vulnerable groups, such as low-skilled workers, left behind by monetary policy measures, she said.

She highlighted how the nation shifted from "a very dramatic lockdown" to more targeted restrictions. "That transition, combined with policy support, seems to have worked well," she said, noting that mobility has returned almost to pre-COVID levels -- meaning that economic activities have been revitalized significantly.

As with the U.S. and China, Georgieva said India, too, has space for more monetary and fiscal measures. "If you can do more, please do. 2021 is the year to use that space but use it wisely in a more targeted manner and to support an accelerated transformation of the economy," she said.

The IMF, which concerns itself with international currency stability, has traditionally pushed member countries to pursue balanced budgets.

But interest rates are sitting at historic lows and likely to remain low for some time. "That gives space for action to be taken during this crisis, as well as for some fiscal action to accelerate the recovery and especially to support the transition to digital and green economy," Georgieva said, adding that "the time to take action on debt and deficit is when we have a durable exit from the health crisis."

Once financial support starts shifting from across-the-board emergency funding to more targeted measures, frameworks will be needed for dealing with the ballooning debt burdens of businesses and developing countries, she said.

The IMF chief also discussed the importance of vaccination to the global recovery. The World Health Organization and other international organizations have set up a facility known as COVAX to ensure fair access to vaccines for emerging countries, yet distribution so far has largely centered on individual contracts between drugmakers and advanced economies.

"To speed the recovery would require international cooperation -- particularly to ensure that vaccines cover low- and middle-income countries," Georgieva said.

"The number that I always flag, and I want to repeat it, is $9 trillion," she said. "This is what we can gain between now and 2025 if we accelerate vaccination across the world."