PARIS -- As preparations for the rescheduled Tokyo Olympics moved along, Thomas Bach, president of the International Olympic Committee, last month gave an interview to Nikkei in which he reflected on kindergarten, what COVID-19 has made us realize about sports and how he will treat his successor. Bach also spoke of "the solidarity of humankind, of unity, of resilience" and how these qualities "will spread from Japan to the entire world" this summer.

Q: Do you have any message for the people of Japan and the world?

A: I feel great sympathy for all the people who have lost their lives or suffered in other ways from this pandemic. But I hope that all humanity has learned one lesson from the pandemic. This lesson is that we need more solidarity within societies, and more solidarity among societies, in order to effectively address the fundamental challenges of our time. In this respect, the Olympic Games Tokyo 2020 will be the most recognized and meaningful manifestation of solidarity and peaceful togetherness of all humankind. As such, the postponement of the Olympic Games is very meaningful.

My message to Japanese people is be proud, be confident and be excited about this huge opportunity to be the host for the entire world and to be the place where the entire world assembles for the first time [amid or after] the coronavirus crisis. And this message of solidarity of humankind, of unity, of resilience, will spread from Japan, from you to the entire world. This is something neither the Japanese people nor the world will ever forget. I'm always cautious when I say something is historic, but this [staging of the Olympics] will be historic.

There can be no doubt that the Japanese people will not only write Olympic history but write world history with this Olympic Games.

Q: How has the coronavirus changed you and the value of sports?

A: The coronavirus hasn't changed my passion for sports. My passion for the value of sports hasn't changed. What has changed is the value of sports. It became obvious. More people have gained firsthand experience of what sports mean for physical and mental health. You only really appreciate something, and the real value of it, when you miss it. Before the virus, we were taking sports [and the exercise they provide] for granted. Access to sports events was also taken for granted. ... You wouldn't think about it, you would just enjoy it.

But the moment people cannot go anywhere, they start to realize sports' relevance in society. In Paris, during the first confinement [last spring], exceptions included sports; you could go jogging. This shows the relevance sports have in our society.

The Tokyo Olympics will not only confirm sports' value but will also be a summit ... a real big, world event. The games are the only thing that brings the entire world together at one time and in one place. We are all missing events in our social lives. You will see not only yourselves coming together but all of the 206 athletes' national committees being in one stadium. This will be incredible.

Q: Do you think it will work?

A: Yes. I've always said Tokyo is the best-prepared city in Olympic history.

You see the commitment of the government of Prime Minister [Yoshihide Suga]. You see the Japanese athletes' community. You see the preparation in the famous, highly appreciated Japanese way -- extremely diligent, well prepared, looking ahead, trying to address all the different challenges even before they arise. The organizing committee is doing a fantastic job.

On the other hand, we're all human, and the coronavirus is still here. For some of the people who don't know whether they can go to a restaurant tomorrow, or whether they can go shopping, they think about it. If we don't know [what we will be able to do tomorrow], how can we know if this big event will take place [six] months from now? But I'm sure this will change, the closer we get to the games.

Q: So, tell us about your childhood.

A: I liked sports very much and I was a child who today would be considered to be hyperactive. One day, my parents wanted to send me to kindergarten. The kindergarten was actually about three minutes' walk from our home.

The day I went to kindergarten, I was back home at noon and said I would never go there again. They asked why, and I said, "It's too boring, you have to sit there and to behave and I will not go there anymore."

On one hand, my parents had a clear mind about my education, but also, they saw that they had a child with lots of confidence in himself, so I did not have to go to kindergarten again.

Q: When you started fencing, how old were you? And why did you choose the sport?

My parents at some stage said my hyperactivity could not go on like it was, that I should have a coach, that I needed some guidance. They told me that I was to join a club sport, which I thought would be fantastic because I could not imagine any club other than football, of course!

But my parents told me my club sport was not going to be football. I replied that if it's not football, then they should forget about it, and that I wouldn't go, like kindergarten.

In the end, they proposed that I join a fencing club because it would be very good general physical training. They said this would also help my football skills because I would be in much better shape.

I went and there I met a very young charismatic coach.

It did not take long for me to start fencing for more than overall physical training. Q: You participated in the 1976 Olympics in Montreal, Canada.

A: There was another sad experience before that. In 1972, the games were in our country, in Munich, in Germany. From a sports point of view, I was qualified. But the national federation at the time said no because they believed I was too young.

They took the seniors and they did not nominate me for the games in [my own] country.

Q: When you won the gold medal, what was your reaction?

A: I felt very, very tired. We did not go to Montreal to win gold, though we did want to win a medal.

And then, once you have it, you have a first moment of joy, but then, and this is not only for me because if you speak with many Olympic champions, it's all the same, at this moment, you don't realize what you have really achieved.

We only realized [we were gold medal winners] when we came back home.

First of all, at the airport there were already many buses with fans and friends welcoming us.

That evening, in this small town of 10,000 people, there were 30,000 people welcoming us. We were escorted with torches by the army chief and the fire brigade. The whole city was illuminated. As I speak, it still gives me goosebumps.

Q: Tell us about your academic background. You studied law and politics at university, right?

A: I wanted to improve my English and [study] politics because then I could maybe join the German foreign service, or I could go into international journalism, or whatever, but then it was like kindergarten, I started studying English and it was not what I had expected.

During this time, there was a reception in my hometown related to fencing. The chair of the local court was there and he approached me, asking what I was doing now. I told him about [my disappointment], and he said, "You would be a great lawyer; you should study law."

I said, "Law, this is even more boring. Maybe more so than English."

He replied that I should give it a go as I had time anyway because the semester was not yet over and that I wasn't going to my English lessons anymore. He told me just to go to the law faculty and just listen. He promised me that I would like it and that law would open doors to all sorts of professions.

Q: Later you worked at Adidas, Siemens and elsewhere. Tell us about your experiences.

A: Adidas was the experience of being closer to sports, and the CEO at the time was an absolute sports fan.

You could have called him at 4 o'clock in the morning German time and ask him about the result of a National Football League game in the U.S., and he would have told you. He knew all about sports and was very fond of athletes. This is also one of the reasons he hired me.

Siemens was a unique experience. It is present in about 190 countries, not as many as [the 206] national Olympic committees, but quite close.

There are also a lot of experiences that I had previously gathered in my professional life. In particular with regard to the Middle East countries because at some point, I was the president of the Arab-German Chamber of Commerce and Industry. Therefore, I had a good knowledge of this region and good access in this region. It was an inspiring experience with this really global company.

Q: How did your experience as an athlete help you as a business person?

A: It gives you a certain discipline and the knowledge that you have to work for your success. Maybe the most important lesson you learn from sports that helps you tremendously in life is that victory should not make you arrogant and defeat should not make you desperate. 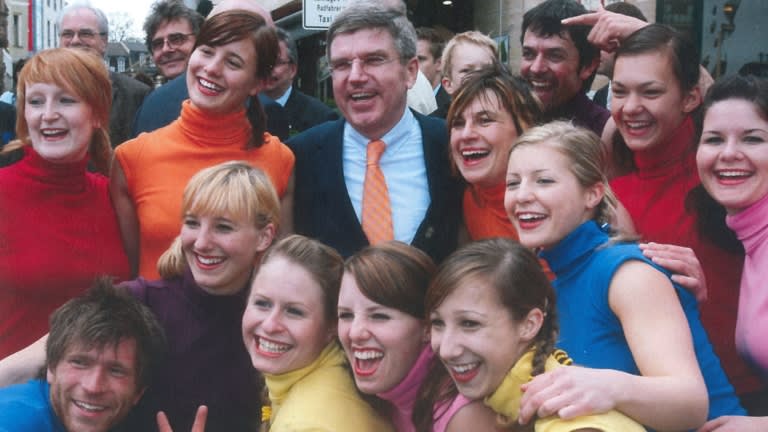 Bach shares a smile with German athletes in 2009.

Q: What is it like to be the president of IOC?

A: Being president of the IOC is always challenging. We are an organization with 206 national Olympic committees. There's always something going on in some part of the world. You will never have a situation where nothing is happening.

Q: It seems you will be re-elected as president at the next IOC session, in March. Tell us what you plan to do when you retire.

A: I will have more time to not only do sports myself but a little bit more time for attending sports events.

I will have more time to read, to satisfy my curiosity.

I will not do one thing. I will not bother my successor.