Conglomerate 'bullish about health care in all of Asia,' John Riady says JAKARTA -- Indonesian conglomerate Lippo Group plans to give a shot in the arm to its core health care business with a revamped telemedicine app next year that it says will improve patients' access to doctors.

Riady looks to boost the health care segment's revenue by 19% a year, adding that he expects revenue to at least double in five years.

After the coronavirus pandemic hit last March, it became difficult for hospitals to take in patients. Siloam's revenue for April plunged 35% from a year earlier. 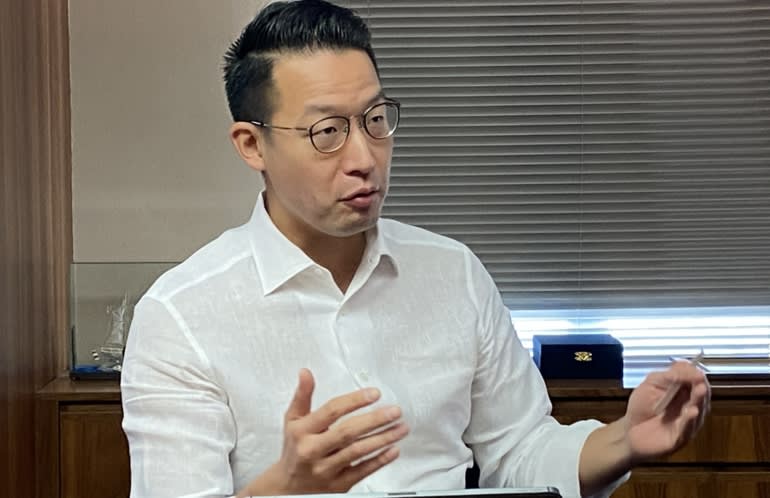 "About 60% of people who go into the hospital really don't have to go to the hospital," Lippo Karawaci CEO John Riady tells Nikkei. (Photo by Koya Jibiki)

Lippo is banking on digitization to reverse its fortunes. Although the group has invested in this area, its current mobile app is limited mainly to scheduling doctor visits. For remote medical examinations, patients need to connect with their computers or use third-party apps.

"I think the app can still be much more improved," Riady said.

Lippo will overhaul the app next year so that it will feature online examinations, digital medical charts and online prescriptions filing.

Boston Consulting Group says 80% of patients approve of online consultations with doctors. The innovation reduces costs by an average of 30% compared to face-to-face visits, and physicians can save time by 20% to 25%.

The sheer size of the Indonesian archipelago makes getting around difficult. The number of hospital beds in Southeast Asia's biggest economy is below international standards and in rural areas especially, people are unable to fully access medical care due to poor infrastructure.

Virtual medicine hold the potential to level the playing field because of its accessibility. The Indonesian Medical Association welcomes this innovation.

Launched in the previous decade, local startups Halodoc and Alodokter are pioneers in Indonesia's medical app field. Halodoc boasts over 20,000 medical practitioners on its platform while Alodokter has more than 30,000 physicians.

The coronavirus outbreak is accelerating the penetration of the two apps, which share revenue with member physicians based on usage count.

To attract patients, Lippo will lean on the reputation of Siloam, which has 39 locations around the country and employs 3,300 doctors. The network's distinctions include Indonesia Hospital of the Year in a 2017 report by Frost & Sullivan, according to Siloam's website. A nurse station at a Siloam hospital: The sheer size of the Indonesian archipelago makes getting to a doctor difficult. (Photo courtesy of the company)

Lippo's redesigned app will be rolled out in all 39 hospitals in phases. Also in Siloam's arsenal is its relationship with Marubeni, the Japanese trading house that owns a 5% stake in the chain.

Marubeni has carried out distance training of doctors in Japan and Russia and will try a similar programs at Siloam. The trading house has also built up a medical supply chain through its services in Southeast Asia, such as blood testing.

Indonesia spent $34 billion on health care in 2019, less than a tenth of the spending in Japan. But the rise of the country's middle class and an expected increase in patients with lifestyle-related diseases creates fertile ground for growing health care businesses.

"We are bullish about health care in all of Asia," Riady said.

Lippo operates hospitals and clinics in Singapore and Myanmar. It looks to expand its international footprint and roll out the telemedicine app after assessing regulations and the levels of medical care in each country.