Jusuf Kalla, who has served twice as vice president, said the nation of more than 270 million is "still in the first wave" of the coronavirus outbreak and the number of cases had "not gone down" since the government reported its first infections in March last year.

"If we look at the current trend, I think perhaps [the number could reach] 20,000 [daily cases] before it goes lower," Kalla said in an interview at his Jakarta home.

Kalla, who served under the administrations of Susilo Bambang Yudhoyono from 2004 to 2009 and Joko "Jokowi" Widodo from 2014 to 2019, said the country has to vaccinate at least a million people every day if it wants to achieve the vaccination target in a year and a half. The government aims to inoculate more than 181.5 million citizens by early next year.

Health Minister Budi Gunadi Sadikin said in a webinar late last month that the country expects to vaccinate 70% of its population -- excluding pregnant women, people with comorbidities and those already recovered from COVID-19 -- to achieve herd immunity.

Indonesia has so far secured four types of vaccines produced by Sinovac, Pfizer, AstraZeneca and Novavax. The government has also partnered with the international organization Gavi, the Vaccine Alliance.

Indonesia has so far given two doses of Sinovac's vaccine, known as CoronaVac, to more than 221,000 out of the 1.4 million health workers targeted in the first stage of vaccination. The country began vaccinating those aged 60 or above on Monday. From March, workers in the public sector -- including the police and armed forces -- will start receiving shots.

"It is expected that by the end of April or middle of April, we will be able to start vaccinating the entire population of Indonesia," Sadikin said.

Kalla said that one strategy that could help the country achieve herd immunity next year is to give private businesses an opportunity to vaccinate staff members.

Such arrangements would speed up the process for "those who cannot afford" to get vaccinated, and it "would not be possible" for the government alone to administer all the vaccines, he said.

"The private sector also helps its employees, its workers [to get vaccinated] free of charge," Kalla said, dismissing concerns that private vaccinations would lead to unequal access. "We have to work together to reach a million per day -- if the government can get 500,000, private sector 500,000, of course 1 million per day [could be achieved]." 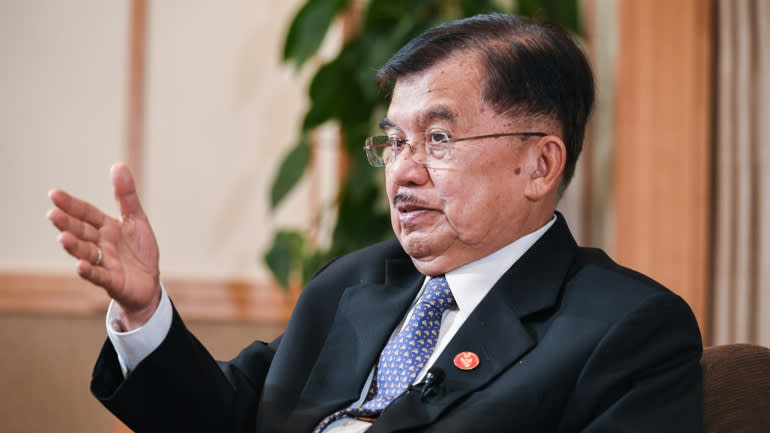 Kalla said it was right to purchase CoronaVac vaccine, as it would be "easier" for Indonesia to store the Chinese-made vaccine by using regular freezers in hospitals and community health centers.

Last month, Indonesia issued an emergency use authorization for the vaccine, which has a 65.3% efficacy, according to interim data from its final-stage clinical trials.

"Pfizer might be good, but those are not as easy [to store because] the infrastructure in Indonesia cannot fulfill the [temperature] requirement," he said, referring to its vaccine's recommended storage temperature of minus 70 degrees Celsius or below.

However, a Surabaya-based independent health practitioner said the "rigid" health screening process of those eligible for COVID-19 vaccines would prevent the government from achieving the daily vaccination target.

R.A. Adaninggar, an internist and a volunteer at Pandemic Talks, a social media platform focusing on information and data related to the COVID-19 outbreak in Indonesia, said some doctors in the field insisted on relying on predetermined vaccination criteria.

Adaninggar -- who recovered from COVID-19 more than six months ago -- was not allowed to receive a shot despite her antibodies testing nonreactive to the virus.

"If it is still like this, it is somewhat difficult [to achieve the daily vaccination target] because a lot of people [who want to be vaccinated] end up having to wait or perhaps being turned away," she said.

Meanwhile, Kalla said, "The level of discipline in our society is still low," and the currently enforced restrictions on public activity in Indonesia's Java and Bali regions were "ineffective" as cases continued to surge.

"It means that the sanctions for that are not well [implemented]. Perhaps people are bored," he said. "[They are] already tired."

Kalla said the Indonesian Red Cross had been helping the government in its fight against COVID-19, distributing some 300 disinfectant vehicles at various locations, providing information related to health protocols and supplying equipment such as soap and masks to communities.

He said he believed Indonesia would avoid a scenario of hundreds of thousands of daily infections like in the U.S. But he reminded Indonesians of a looming threat.

"We are still more disciplined than America; then there is the factor of Trump, who did not care. In fact, he himself gave a bad example of not wearing a mask," he said.

"But the facilities [in Indonesia] now could be considered not enough anymore," Kalla said. "We are not the Chinese, who can build a hospital [in Wuhan] in 10 days, so it still requires extra effort, especially extra community discipline."