SINGAPORE -- "Megaphone diplomacy" denouncing Israel is "cynical" and "completely futile" if the goal is to help Palestinians, the Israeli ambassador to Singapore argued weeks after a war with Gaza brought stern condemnations from some Southeast Asian states.

The ambassador, Sagi Karni, also told Nikkei Asia that an undeclared but real Israeli effort to strengthen relations in Asia would continue regardless of the possible power change in Jerusalem, where Prime Minister Benjamin Netanyahu may soon be ousted after 12 years.

During 11 days of fighting in May, Hamas -- the Palestinian Islamist group that controls Gaza -- fired thousands of rockets at Israel, killing more than 10 people. Israeli strikes on Gaza meanwhile killed around 250 Palestinians according to the United Nations, roughly half of them reported to be civilians.

As the battle raged, Muslim-majority countries in the Association of Southeast Asian Nations roundly criticized Israel. Indonesian President Joko Widodo tweeted that his government "strongly condemns" the strikes that "resulted in the loss of lives of hundreds, including women and children."

"Israel aggression must be put to a stop," Widodo wrote. His foreign minister, Retno Marsudi, voiced Jakarta's support for the "Palestinian struggle." And Malaysian Prime Minister Muhyiddin Yassin urged the international community "to force Israel to stop its attacks on the Palestinian people."

The two countries and Brunei, another mostly Muslim ASEAN member, issued a joint statement blasting Israel's conduct in the war as well as "demolitions and seizures of Palestinian-owned structures." The violence had followed protests over an imminent Israeli court ruling that could evict some Palestinian families from a neighborhood in East Jerusalem in favor of Jewish claims.

The statement accused Israel of "flagrant violations of international law, including humanitarian and human rights law" and urged the U.N. Security Council to "take all possible measures to guarantee the safety and protection of the Palestinian civilians."

Karni rejected such accusations, instead charging Hamas with using "asymmetrical" tactics by intentionally launching weapons from civilian areas in Gaza and aiming them at Israeli civilians. Both Israel and the U.S. regard Hamas as a terrorist group.

"When people talk about Israel, you know, using disproportionate power, it shows a complete disregard to the war crimes of Hamas, the modus operandi, and their mentality when they put the missile launchers in the schoolyard," he said. A Palestinian flag flies in Gaza on May 25, surrounded by buildings destroyed by Israeli airstrikes during the recent fighting.   © Reuters

The ambassador countered that Israeli forces sought to avoid "collateral damage" by warning occupants to vacate Gaza buildings that were being targeted. U.S. Secretary of State Antony Blinken in late May vouched for Israel's "very significant steps" to avoid civilian casualties.

In the interview, Karni took issue with arguments focusing on the larger number of civilian casualties on the Palestinian side, suggesting Hamas feeds off global sympathy. "It's morally corrupt," he said, "because basically what they are saying is that we didn't see enough Israelis dead."

"If we will resort to primitive military measures I can guarantee you there will be more casualties on the other side -- that's the fact of the matter because Israel, like any other sovereign country, will not sit idle [while] rockets and missiles are landing on towns and cities."

Despite Israel's recent strides in normalizing relations with the United Arab Emirates and other neighboring countries that had rejected the Jewish state's existence since its 1948 founding, Asia's Muslim-majority nations have yet to come around. Israel has no formal diplomatic ties with Indonesia, Malaysia nor Brunei; as the closest mission, the Singapore embassy watches developments in the three neighbors.

Karni suggested that much of the criticism in Southeast Asia and elsewhere is geared to domestic audiences, and in some cases seeks to divert attention from local problems.

"Many countries, when they are running a policy of supporting the Palestinians and bashing Israel, they are doing it in a very cynical way because of their domestic political requirements -- much, much more than their genuine wish to help the Palestinians," Karni said.

On the ground, a cease-fire that took effect on May 21 has held so far. But Karni warned it is a fragile truce unlikely to last forever, stressing the key factor is Hamas' refusal to recognize the state of Israel and abandon terrorism.

The fighting did not bring Hamas "to the conclusion that they have to change their ideology, their political maneuvering and their aspiration" to see Israel dissolved, Karni explained, resulting in a stalemate where it is "practically impossible to make any positive political development." Ambassador Karni says criticism over uneven death tolls is "morally corrupt" because it is tantamount to "saying that we didn't see enough Israelis dead." (Photo courtesy of the Embassy of Israel in Singapore)

Bilahari Kausikan, former permanent secretary of Singapore's Ministry of Foreign Affairs, was similarly pessimistic on the way forward, partly due to the influence of a bigger player in the Middle East's complex power game: Iran.

"People forget the Israel-Gaza conflict is very largely an Israel-Iran conflict with Hamas as an Iranian proxy," Kausikan told Nikkei. The Iranian government rejects the Jewish state's legitimacy and often makes explicit threats, while remaining on the U.S. list of state sponsors of terrorism since 1984.

"Sooner or later there will be another round of conflict in Gaza as long as that larger conflict is not settled, and I don't see any prospect of that being settled either," Kausikan said.

While Asia can assist in humanitarian efforts for the Palestinians -- Singapore's government pledged $100,000 as "seed money" to help the Singapore Red Cross drum up donations for Gaza relief -- both Karni and Kausikan suggested attempts to mediate directly would be unlikely to pay off. China, for one, had offered to host peace talks before the latest hostilities broke out.

"If there are too many cooks in the kitchen, the dish won't [become] very tasty," Karni told Nikkei.

Kausikan said, "I don't see any role for external parties and certainly not any Asian country, although from time to time Malaysia and Indonesia like to pretend they are playing a role for reasons of their domestic politics."

At the same time, Kausikan suggested Israel could do a better job of making its case publicly in Asia. The latest Gaza war, he said, did not do "very much" political damage to Israel in ASEAN but did continue "a steady process of delegitimization of Israel's right to self-defense."

"As I have told them, the Israelis are terrible at public diplomacy and this is almost as big a threat as rockets," Kausikan said. 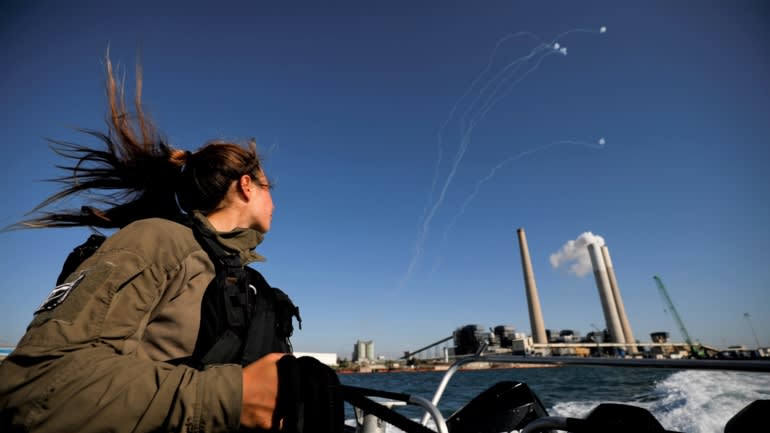 Karni said Israel prefers to engage Southeast Asian countries bilaterally, rather than approaching ASEAN as a bloc, due to the differences across member states. Noting the coup in Myanmar and the military's deadly crackdown on protesters there, he said Israel was "worried like the rest of the world."

"It's a worrisome situation, especially the violence and the political setback," Karni said. "We hope that peace will prevail in Myanmar and there will be no more civilian casualties."

Israel itself is on the cusp of a major political transformation.

A new power-sharing coalition led by centrist Yair Lapid and nationalist Naftali Bennett is poised to unseat Netanyahu in the coming days. The group consists of small and midsize parties from across the political spectrum, and for the first time includes a party that represents Israel's Arab minority -- the United Arab List.

Under Netanyahu, Israel worked to boost ties in Asia, including with Japan and China.

Noting that a new government has yet to be sworn in, Karni urged patience for the official outcome. But either way, he said Israel is unlikely to veer much from its current engagement with Asia.

"We never declared a 'pivot' to Asia but in reality, there is some sort of a pivot to Asia, definitely when it comes to the economy -- we have seen more trade with Asia," Karni said.