ISTANBUL -- The new mayor of Istanbul said President Recep Tayyip Erdogan's government has undermined confidence in Turkey's democracy and should be held responsible for the nation's slumping economy.

Turkey's economy has contracted for three straight quarters since the lira plunged last year, as deteriorating relations with Washington prompted U.S. President Donald Trump to slap sanctions on its NATO ally. Imamoglu said that the ruling Justice and Development Party, in government since 2002, has no excuse for the current economic situation.

"We have many problems starting with economy and deep unemployment, Imamoglu, 49, said. "A government ruling the country for so long cannot create any excuse and it is obvious that it is totally their fault. People gave them clear mandate to rule."

Imamoglu became the first secular mayor of Turkey's biggest city since 1994 in June, after beating a candidate from Erdogan's Justice and Development Party -- a decisive win that came in a rerun after his razor-thin victory in a March's election was annulled.

He is actively seeking overseas investment in the city, partly because he claims that Turkey's state banks have stopped lending to Istanbul on the central government's orders.

Imamoglu said he plans to visit Japan and China before March, followed by trips to India and Singapore later next year. He will call on Japanese and Chinese businesses to invest in and provide loans to Istanbul. He said a few offers have already come in.

"Of course there is also a search for financing and there are already proposals from them," he said. "Some are pure financing and some are project financing in build-operate projects, as well as development bank financing support."

Imamoglu said Japan is an important partner for earthquake-prone Istanbul, and he intends to deepen cooperation with Tokyo in areas such as disaster preparedness. 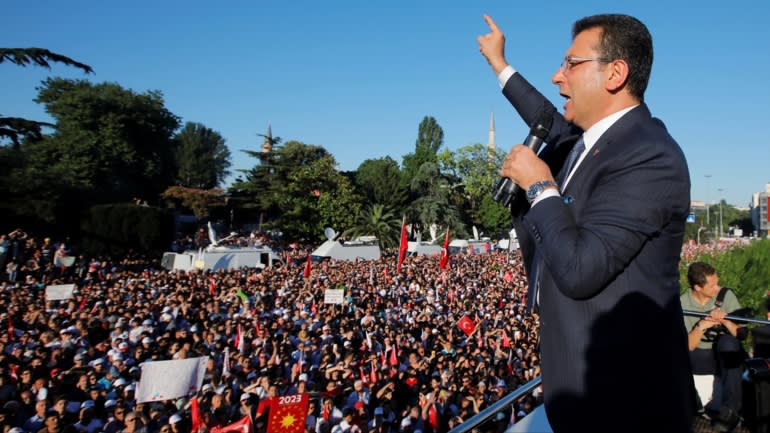 Istanbul Mayor Ekrem Imamoglu addresses his supporters from the top of a bus outside City Hall in Istanbul on June 27.   © Reuters

In the interview, Imamoglu stressed that Turkey is part of Europe and it should seek to improve ties that have become strained over Ankara's reliance on Moscow and the mining of gas fields in Cyprus' exclusive economic zone. He also shared Europe's concerns over Turkey's current state of democracy.

He has visited the U.K., Germany, France and Denmark in the past two months, securing a 110 million euro ($121 million) loan from Deutsche Bank and 86 million euros from the French Development Agency to restart some of the suspended construction of Istanbul's new subway lines.

"We got very positive feedback from our meetings with financial institutions, especially in London," he said of the trip.

But he faces immediate problems at home. The alleged halting of state bank lending to Istanbul municipality has made financing infrastructure projects difficult. Istanbul needs up to 20 billion liras ($3.46 billion) to fund schemes including the construction of subway lines.

Claiming that the state banks' moves are politically motivated, Imamoglu hinted that the lenders are acting on behalf of the Erdogan administration.

Imamoglu is widely seen as a leading candidate to challenge Erdogan's 16-year rule in the next presidential election, which is scheduled to be held by 2023.

Asked whether he is interested in running, Imamoglu said he is committed to carrying out his current duties.

"At the moment, my job is mayor of Istanbul and I want to succeed. I want to become the most democratic mayor ever," Imamoglu said. "That is all I can say for now."