The company will also rebrand, changing its name to Kioxia on Oct. 1 in a move to further distance itself from its troubled parent.
HIDEAKI RYUGEN and MASAYA SATO, Nikkei staff writersJuly 21, 2019 00:40 JST | Japan
CopyCopied

TOKYO -- Toshiba Memory Holdings faces an uphill struggle to an initial public offering that will extricate the leading Japanese chipmaker from the Toshiba group.

The company announced on Thursday that it will change its name to Kioxia on Oct. 1 in a move to further distance itself from the conglomerate.

But slack global demand for chips used in data center servers and a shutdown at one of its Japanese plants are threatening to delay the IPO.

When the memory unit spun off from the group in June 2018, it announced plans to go public within three years. The IPO has been set for fiscal 2019, but the company's chips have become less competitive than that of its rivals, a sign of brewing trouble. Stacy Smith, the company's new executive chairman, will try to improve the chipmaker's outlook amid weak global demand and another management crisis.

Total spending on data centers by the top 20 IT companies -- including Apple, Google and IBM -- fell in the first three months of 2019 from a year earlier, according to Synergy Research Group. The current weak demand could derail the planned IPO. However, Smith remains confident. "I would still predict that over the next five years we are going to see a lot growth of data centers," he told Nikkei on Thursday.

Toshiba Memory has also taken a hit from suspension of operations at its flagship Yokkaichi plant due to a power outage on June 15. Noting that the plant is online again, Smith said, "We are starting a process of revamping the working process inside the factory," indicating it will be some time before the plant becomes fully operational. Moreover, costs involved in restarting the facility are likely to weigh on profits, possibly decreasing market valuation and spelling more trouble for the IPO.

Toshiba Memory reported operating profit of 450 billion yen in fiscal 2017 thanks to robust global demand, but posted a group operating loss of 28.4 billion yen for the first quarter of 2019.

The company held three months of inventory just before suspension of the Yokkaichi plant, according to analysts.

The suspension and new Japanese restrictions on exports of semiconductor materials to South Korea are pushing memory prices up. While this will boost Toshiba Memory's earnings, the amount is unlikely to offset declining demand.

Smith declined to offer any specifics regarding the date of the IPO, saying, "Our plans are to go when it is appropriate for us to go." 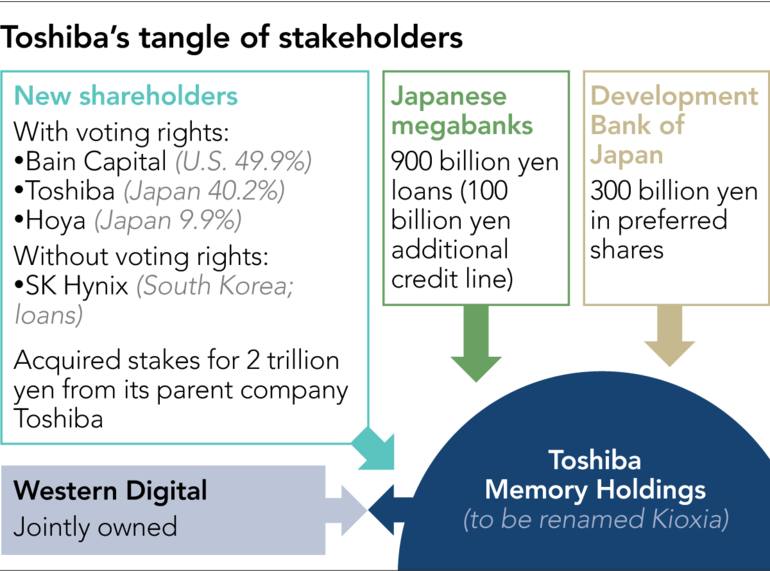 Toshiba Memory is also facing a management crisis. CEO Yasuo Naruke, who has led Toshiba's chip business since he was vice president, has been away on sick leave. Although the company says he will return in September, stewardship until then will be left to Smith and Executive Vice President Nobuo Hayasaka.

In June, the company raised 1.3 trillion yen in financing, including an additional credit line of 100 billion yen, from the Development Bank of Japan and three Japanese megabanks. The funds were used to buy back shares from Apple and other corporate investors to improve the company's pre-IPO financial profile, which can be tarnished if shares are held by customers.

The move, however, comes with risks: While it improves chances for a successful IPO, creditors now wield more influence over management.

Problems at the top have hurt the company in the past. It once quarreled over management with Western Digital, its partner in the Yokkaichi plant.

By jettisoning the Toshiba name, the new company has signaled its desire for a fresh start.