TOKYO -- Japan will consider cutting off all official development assistance to Myanmar, even for ongoing projects, if the situation there does not improve, Foreign Minister Toshimitsu Motegi told Nikkei.

"We don't want to do that at all, but we have to state firmly that it will be difficult to continue under these circumstances," Motegi said. "As a country that supported Myanmar's democratization in various ways, and as a friend, we must represent the international community and convey that clearly."

Japan provided 189.3 billion yen ($1.74 billion at current rates) in development aid to Myanmar in fiscal 2019, more than any other country with disclosed figures -- numbers for China have not been released.

Tokyo has already halted negotiations on new projects in response to the military coup and the ensuing violent repression of protesters. A full suspension of funding would mark its first time doing so since Japan began providing ODA to Myanmar in 1954, according to the Foreign Ministry here.

Projects receiving official Japanese financial support include a rail link between Yangon and Mandalay, the country's two largest cities. Work on some has been brought to a halt by the ongoing turmoil, but others are still underway.

Security forces are said to have killed about 800 people and arrested roughly 4,000 since the Feb. 1 coup. While the U.S. and the European Union have imposed sanctions against junta leaders and military-linked entities, Japan has avoided following suit, opting instead to keep dialogue going. 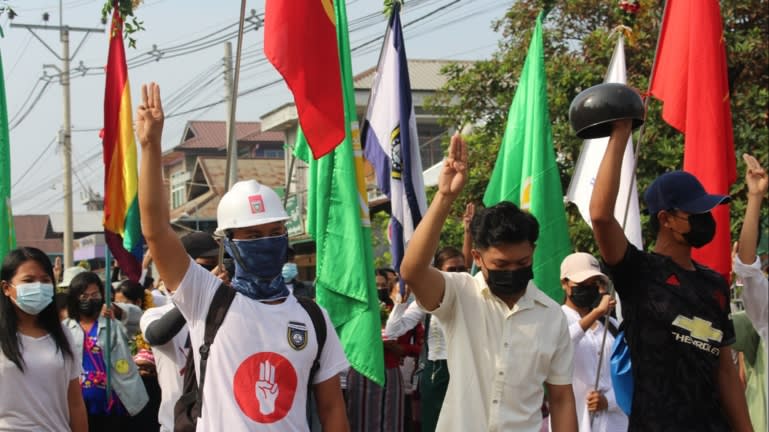 Demonstrators protest against the military coup in Dawei, Myanmar, on April 13.   © Reuters

"We have appealed via multiple routes" to the military for an immediate end to the violence, release of detainees and restoration of democracy, Motegi said.

Tokyo also maintained ties with Myanmar under the previous junta while supporting the country's democratization. "We have a greater variety of channels in Myanmar, including with the military, than Europe and the U.S.," Motegi said. "Group of Seven foreign ministers understand that very well."

Motegi also touched on the messages aimed at checking China that appeared in a joint U.S.-Japan statement after April's summit, as well as in this month's communique from G-7 foreign ministers, noting that the latter mentioned Taiwan for the first time.

"We were in agreement on strongly opposing unilateral actions by China that could undermine the international order," he said. The difference from the group's approach through last year is that "we affirmed that we will respond as a united front."

"That basic understanding will certainly continue" to be reflected in the upcoming G-7 summit, he said.

Motegi said Tokyo will cooperate with "any other countries that share the vision of a 'free and open Indo-Pacific'" in addressing Beijing's rise in the region.

However, he said, "there has been no discussion whatsoever about expanding" the Quad security grouping of the U.S., Japan, India and Australia to include such other countries as South Korea.

Asked whether Japan and the U.S. plan to team with Taiwan or South Korea on semiconductor supply chains and fifth-generation wireless infrastructure, Motegi acknowledged an urgent need to "ensure superiority in core infrastructure and sensitive technologies" as a matter of security.

"We want to strengthen partnerships in both the public and private sectors with the U.S. and related countries and regions to build diverse supply chains," he said.