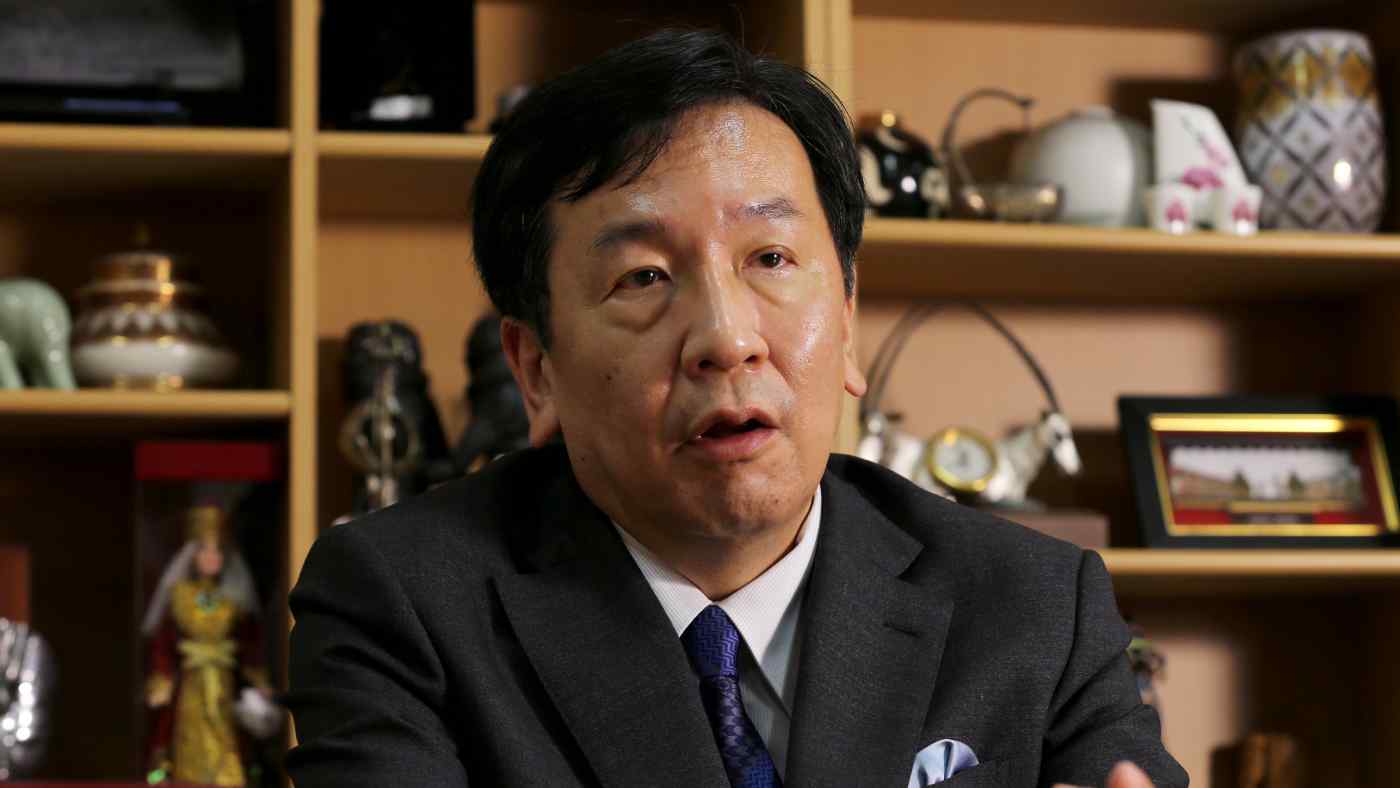 In a Thursday interview with Nikkei, Edano discussed his party's platform in this autumn's lower house election, from overhauling Japan's pandemic decision-making to curbing reliance on nuclear energy.

Edano, who leads Japan's largest opposition party, said he was prepared to work with a split Diet should the CDP win control of the government in the upcoming vote. But stressed that he would not consider forming a coalition with the Japanese Communist Party.

Q: How would you rate the government's response to the coronavirus?

A: The decision-making process has been completely backward. The government is currently making policy decisions, then consulting with experts. If we were in charge, we would ask experts for their projections and other scientific input first.

Any decision to ease restrictions on movement should also be based on expert analysis. Politics shouldn't be leading science. We can only make policy decisions after experts run their simulations.

Q: Will the CDP pledge an end to nuclear energy in Japan as part of its campaign platform?

A: We will champion the goal of achieving carbon neutrality by 2050 without using nuclear reactors. We will propose concrete steps to make this a reality under our basic energy plan.

Q: Specifically, what steps do you plan to take?

A: We will be putting our plan forward during the election. Broadly speaking, Japan is lacking in its capacity to store electricity and the ability to use energy effectively. We want to make actionable proposals.

Q: How about allowing married couples to use different surnames? Will that be part of your platform?

A: That will probably be one of the clearest differences between our platform and the LDP's. It will be a key component of our platform. Like nuclear power, it's an issue the government cannot tackle in a meaningful way unless we are in power.

Q: What is your strategy for the upcoming lower house election?

A: We have over 210 candidates running in single-seat districts in the next election. Combined with candidates for proportional representation seats, we will have enough candidates to potentially gain a majority in the lower house (which has 465 seats).

Q: If you win, would you consider forming a ruling coalition with the Japanese Communist Party?

A: We are not considering forming a coalition with the Communist Party. I believe they understand our position as well. We will outline our final plan before the election.

Q: Even if the CDP wins this election, the LDP would still control the upper house.

A: I've worked with a split Diet before, when I was chief cabinet secretary. We are aware of the challenges this could cause, and are planning for them as we draft our policies.

Q: You announced a seven-point campaign pledge on Tuesday to be finalized at the first cabinet meeting under a new government, including a more than 30 trillion yen ($273 billion) fiscal 2021 supplementary budget for coronavirus response and other purposes. Could you explain this in more detail?

A: The idea of deciding these things in a cabinet meeting may seem esoteric to those who are not very interested in politics. But it's an option we would have regardless of how the parliament breaks down, so we were confident in proposing it at the very beginning.

Q: You have called for a temporary consumption tax cut. What is your position on fiscal policy?

A: Temporarily reducing the consumption tax just as people are starting to return to their normal lives would be extremely effective. It would give a boost to low-income households and mitigate the blow to the restaurant, tourism and event industries.

Given the coronavirus pandemic, we have no choice but to scrap the goal to achieve a primary balance surplus by fiscal 2025. We aren't in a place to be thinking about fiscal health.

Q: You're also advocating for higher wages for nursing and child care workers. How does this fit in with your fiscal policy?

A: We hope to create a society where we can all support each other over the medium to long term. Social spending provides much more of an economic boon than conventional public projects -- that's a widely accepted position worldwide. Even with our planned spending, we would be able to achieve a healthy fiscal balance.