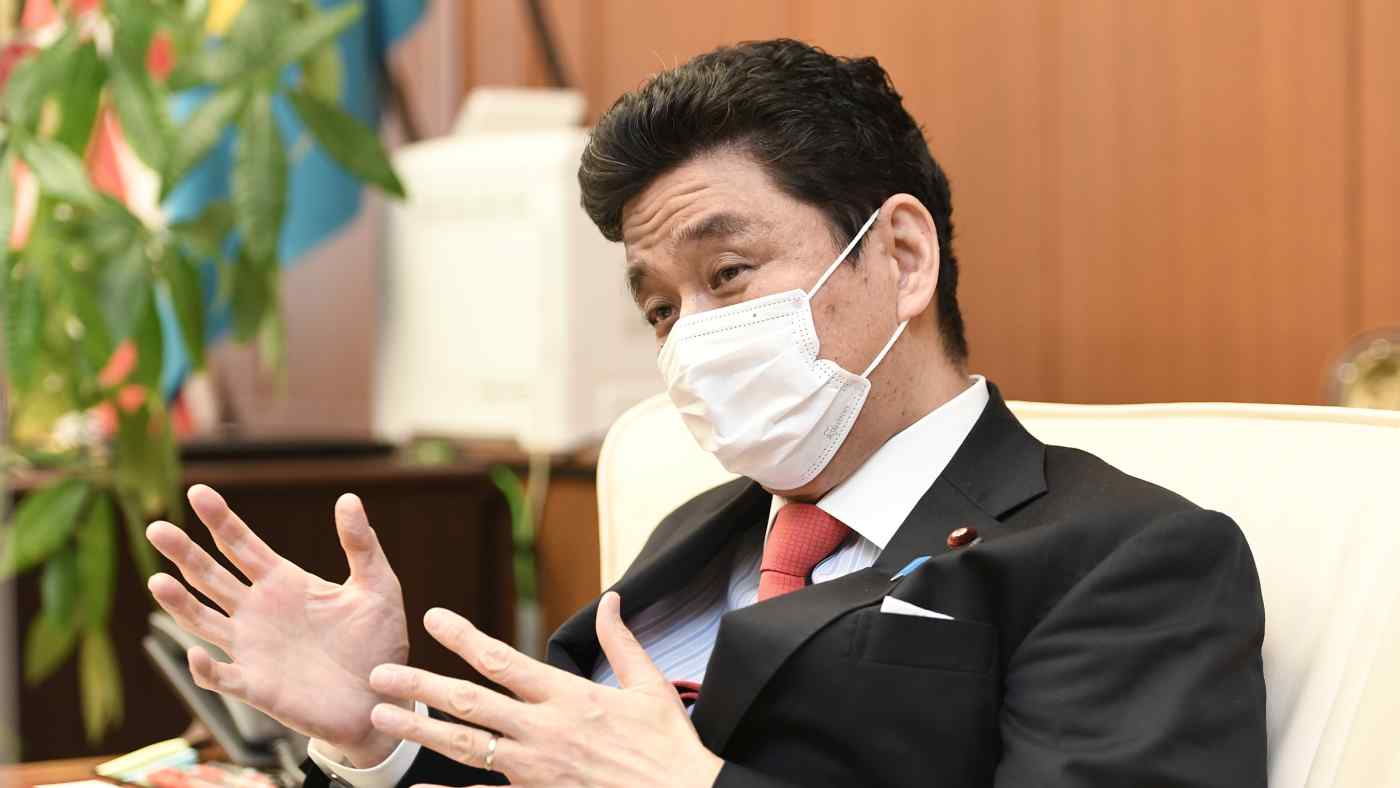 TOKYO -- Japan does not decide its defense budget worrying about its size relative to GDP, Defense Minister Nobuo Kishi told Nikkei in an exclusive interview on Wednesday.

“We must increase our defense capabilities at a radically different pace than in the past,” considering China’s increased capabilities, as well as new areas of warfare such as space, cyber and electromagnetics, Kishi said.

The statement signals that Japan is ready to do away with its long-standing 1% GDP ceiling for annual defense spending, and reflects the country’s intent to bolster its own national defense capabilities, as Prime Minister Yoshihide Suga promised U.S. President Joe Biden last month.

"We will properly allocate the funding we need to protect our nation" without considering outlays in relation to GDP, he said.

The decision comes a month after Japan pledged to "bolster its own national defense capabilities to further strengthen the alliance and regional security" in a joint statement released after the Biden-Suga summit at the White House.

It also comes amid repeated incursions by China's now quasi-military coast guard into the waters around the Japan-administered Senkaku Islands, which China claims and calls the Diaoyu.

The East China Sea islands sit just 170 km from Taiwan and could quickly be engulfed in a Taiwan Strait conflict. The Nansei Island chain stretches from the southernmost tip of Kyushu to the north of Taiwan and consists of small islands such as Osumi, Tokara, Amami, Okinawa, Miyako and Yaeyama. Last month, the Chinese aircraft carrier Liaoning and five escort vessels passed through the Miyako Strait, a 250 km-wide waterway between Okinawa and Miyako, before heading south to Taiwan.

The islands are seen as crucial in the defense of the Senkakus.

"There should not be any areas not covered by the Self-Defense Forces," Kishi said. "It is very important to deploy units to the island areas."

Kishi also expressed an intention to add a third unit to the Amphibious Rapid Deployment Brigade, based in Sasebo, Nagasaki.

"We will strengthen new areas such as space, cyber and electromagnetic warfare," Kishi said. "Technological innovation is advancing at a tremendous pace and the nature of fighting is changing."

On regional security cooperation via the Quad -- a loose alliance among the U.S., Japan, India and Australia -- Kishi said he is in favor of a "Quad defense ministers meeting."

Since the 1990s, the only year that Japan's defense spending exceeded 1% of GDP was fiscal 2010, when GDP plummeted after the global financial crisis. The country's defense budget has grown for nine straight years through fiscal 2021 but has remained below 1% of GDP.

Intentionally crossing the 1% line would mark a turning point for Japan's security policy, and is likely to draw pushback from China. 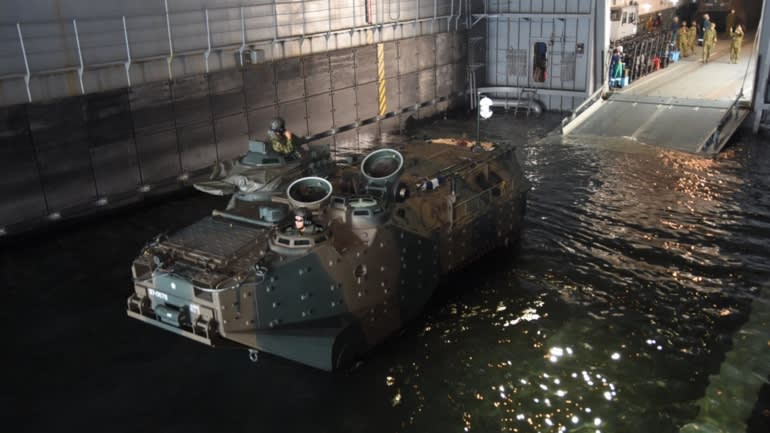 An assault amphibious vehicle of Japan's Amphibious Rapid Deployment Brigade prepares to land during an exercise in August 2020. (Photo courtesy of the Japan Maritime Self-Defense Force)

As Beijing has grown more assertive, the U.S. has encouraged Japan to bolster not only the alliance's defense capabilities, but its own as well. The previous U.S. administration, under then-President Donald Trump, urged allies including Tokyo to spend at least 2% of GDP on defense.

The military balance between Japan and China has "leaned heavily toward China in recent years, and the gap has been growing by the year," Kishi said.

Inflation-adjusted global military expenditures rose 2.6% last year to a record $1.98 trillion, according to the Stockholm International Peace Research Institute. The data shows a particular uptrend in Southeast Asia amid concern about China's maritime forays, with defense spending rising even amid the coronavirus pandemic.

Kishi said the government continues to discuss whether Japan should develop the capability to strike enemy bases in response to an imminent missile launch. "There's an awareness that just improving our interception capabilities may not really be enough to protect the public," he said.

He noted that focusing on interception will become more costly as missiles improve.

On the question of whether Japan and the U.S. intend to revise their defense guidelines with an eye toward a potential conflict in the Taiwan Strait, Kishi said that while there are no plans to do so at this time, "we'll need to adjust to changes in the situation and make changes as needed."