President says country will make own decision on Huawei JAKARTA -- Fresh from winning a second term as Indonesia's president, Joko "Jokowi" Widodo is looking ahead to his next five years with big plans to support the nation's digital economy.

Widodo said in an interview with the Nikkei Asian Review that new tax breaks will help Indonesia nurture its next unicorns, as well as increasing investment into Southeast Asia's largest economy.

"We want Indonesia to become a home for tech giants. We have the market and skilled workers. And Indonesia already has four unicorns," Widodo said Tuesday at the Merdeka Palace in Jakarta. "We will always encourage new startups and give them room to grow."

Sporting his trademark white shirt, Widodo appeared at ease despite a Constitutional Court ruling due Thursday on a legal challenge against his victory in the April presidential vote. But the political uncertainties have not deterred him from his digital drive as he seeks to propel the economy into the world's top 10.

Indonesia's internet economy was estimated to be worth $27 billion in 2018, making it the largest in Southeast Asia and three times the size of second-place Singapore. These four unicorns -- ride hailer Go-Jek, online travel company Traveloka and net marketplaces Tokopedia and Bukalapak -- have helped the economy grow at around 5% annually over the past half-decade.

He said that a "super deductible tax" plan, currently being deliberated by the finance ministry, will be released next month. The measure is aimed at encouraging human resources development in the digital sector, as well as export-oriented industries and local businesses that produce substitutes to imported goods.

"That would hopefully make investors more enthusiastic" about putting money into Indonesia, the president said.

Industry Minister Airlangga Hartarto told Nikkei last month that the deductible tax -- applicable to both local and foreign companies doing research and development in Indonesia -- will be set as high as 200%. That means for every $100 million a company invests, it will receive a tax allowance of $200 million, he said. 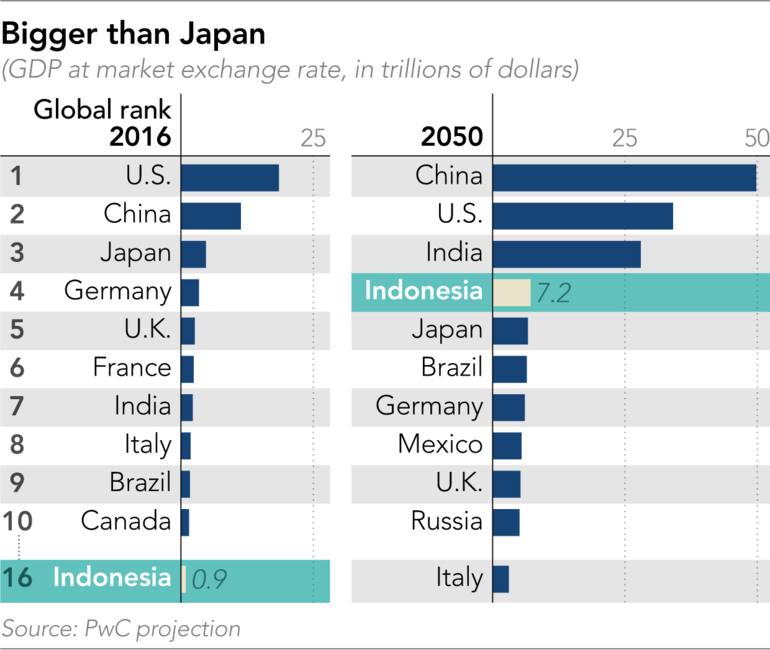 Widodo, who set the target in his first term of making Indonesia Southeast Asia's largest economy by 2020, said he wants to create ripple effects by "connecting online with offline ecosystems."

He said he wants Indonesian unicorns to help the growth of small and micro businesses across the archipelago. "That means the unicorns are not growing alone -- they must bring small businesses [to grow] along with them."

Widodo added that his country is building infrastructure through communications satellite deployment and the construction of fiber optic lines. A nationwide 4G network upgrade is expected to be completed by the end of the year, he said, with 5G to follow.

He indicated that Indonesia will not follow the U.S. in banning Huawei Technologies equipment from its 5G network. Instead, he said "the most important national interest is national security, [and] Indonesia will make its own decision."

Widodo said he hopes the Group of 20 nations will come to agreement on digital economy taxation at a meeting this week in Osaka, Japan. Indonesia's tax office has been complaining about the likes of Google and Facebook failing to pay income tax despite gaining huge amounts of advertising revenue from the country.

The president said that steps such as the digital economy push, structural reforms and further infrastructure development, are expected to help propel Indonesia into the top 10 of global economies by 2030 and the top four by 2045. He said he wanted the economy to grow at a rate "beyond" the current 5%.

In another move to stimulate the economy, Widodo is also planning to relocate the capital. He told Nikkei the site would be somewhere in Kalimantan, the Indonesian part of Borneo island, with congested Jakarta remaining as the commercial center. He has asked for a feasibility study to be presented to him in August.

To this end, Widodo said his government is planning to revise a rigid labor law that has been criticized by businesses for making it hard to fire nonperforming workers. His administration, he said, also plans to reduce Indonesia's corporate tax rate to 20% from 25% by 2021.

Although Indonesia's consumption-driven economy is relatively shielded from the impact of the escalating U.S.-China trade war, uncertainties in the global economy have a negative impact on the archipelago nation.

The country's persistent current-account deficit -- it reached $7 billion in the first quarter of this year, up nearly 30% from the same period in 2018 -- means that investors are likely to pull their money out of the country when they see global risk. One example of this is the rupiah's slide to a 20-year-low against the dollar last year.

The president said the trade war was "detrimental" to global trade, and that countries need to "avoid policies that harm" other countries.

"We will speak out against prolonging protectionism [at the G-20]," Widodo said. "We want to push for stable and strong, inclusive economic growth."