ALMATY -- The global aviation sector is struggling to recover from a pandemic-driven slump, but Kazakhstan's flagship carrier Air Astana is bucking the trend with a swing back to profit and record passenger numbers, its CEO told Nikkei Asia.

The little-known airline, which is eyeing a listing later this year, is banking on even more growth as the COVID-19 slump recedes and demand for leisure travel soars. But Russia's invasion of Ukraine could make for a rough ride.

That marked a strong rebound from Astana's $94 million loss in 2020 and was also up from a $30.3 million profit a year earlier, according to the airline's chief, Peter Foster. Revenue for 2021 jumped 92% on-year to $756 million, Foster added.

"[It] was a good result. Far better than expected," he said in a recent interview.

The upswing came as the Almaty-based company's traffic hit a record last year with some 3.5 million passengers flying on Air Astana and another 3.1 million on low-cost subsidiary FlyArystan, a nearly 30% increase on a combined 5.1 million passengers in 2019 before the pandemic sent traffic plummeting.

The rise tracked a broader jump in the Central Asian nation's aviation sector, which logged 7.6 million domestic passengers last year, bouncing back from 4.6 million in 2020 and 5.35 million in 2019, according to Kazakhstan's national statistics bureau, a rise partly driven by an emerging middle class.

"We think that Kazakhstan was the fastest growing domestic aviation market in the world last year," Foster said.

The Air Astana group, including its 3-year-old budget arm, has a 71% share of the country's domestic and international market, while two Kazakhstan-based rivals, SCAT Airlines and Qazaq Air, accounted for about 21% and 6% of the market, respectively.

Internationally, destinations in Central Asia, the Caucasus and Russia were especially profitable for Air Astana in 2021, as COVID restrictions loosened.

"There was a lot of pent-up demand," Foster said. "Combined with constricted supply... yields on the regional routes were the best we'd ever experienced." 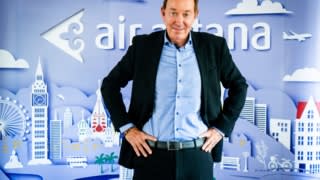 Air Astana, which next month marks the 20th anniversary of its first commercial flight, has been focusing on "lifestyle" routes to destinations including the Maldives, Sri Lanka, India, Thailand and Gulf countries bordering the Red Sea, rather than business travelers.

Demand has also shifted away from transit flights to direct routes which avoid the pandemic-era problem of ever-changing travel restrictions.

Meanwhile, Air Astana is replacing its fleet of aging Boeing 757s with next generation aircraft such as Airbus Neo and A321 long haul planes. The group is also boosting the size of its fleet by year-end to 43 jets, from 36 planes now, with FlyArystan operating 10 aircraft.

But events at home and abroad threaten to weigh on the carrier's rebound.

In January, deadly unrest over fuel price hikes in the ex-Soviet republic drove the group to cancel about 800 domestic and international flights as airports shuttered.

"That was very much a V-shaped event," Foster said. "January was obviously very badly affected because of the airport closures, but the market came back in February fairly quickly."

The war in Ukraine, however, is set to have a longer-term impact.

Air Astana said last month it was canceling all its Russian routes -- about 9% of its overall business -- as it could no longer be insured for trips into the country.

Foster said the loss of Russia "was absorbable into the rest of the network."

Kazakhstan's Samruk-Kazyna Sovereign Wealth Fund, which owns 51% of Air Astana, announced in February that it would press on later this year with a repeatedly postponed plan to take its stake public. Britain's BAE Systems owns the remaining 49% of the carrier.

But political risks at home and abroad could dent demand for Astana's long-mooted share sale.

"The company is easily the most successful airline of the former Soviet region and a real success story for Kazakhstan," Ben Godwin, head of analysis at London-based PRISM political risk management, told Nikkei Asia. "However, its operations have been hampered by the war in Ukraine, somewhat weakening the case for investors."

"Together with the adverse market conditions, this could make it difficult for Samruk-Kazyna to secure the valuation that it is seeking."

Still, Foster is bullish as the airline leans on the domestic market and key Central Asian routes, as well as flights to China, India and Europe.

"As far as COVID's concerned, that's in the past. There's a lot of advanced demand, people are getting on with their daily lives," he said. "Obviously, now the key focus is the Ukraine and Russia situation. Nobody has any visibility on that whatsoever. It's impossible for us to speculate."