HONG KONG -- Major international retailers and clothing brands have faced questions in recent years as to whether their products are made using forced labor involving China's Uyghur Muslim minority.

Hong Kong supply chain management company Li & Fung has long played a central role in channeling clothes and other goods from factories in China and elsewhere to Western brands and stores like Ralph Lauren and Walmart. For Chief Executive Joseph Phi, the issue of sourcing from factories in the Uyghurs' homeland in the northwest Xinjiang region requires delicate handling.

"We should think of Xinjiang as a place that has attracted a lot of attention," he told Nikkei Asia in a recent interview. "As far as we are concerned, there is this political element to it. [But] as a company, we are apolitical. We don't take certain positions."

Phi did not answer directly when asked if his company buys from factories in Xinjiang.

"If they follow the right standard, we shouldn't stop ourselves from doing business with them," he said. "Every single factory that we deal with in China and around the world, we have boots on the ground to pre-qualify them. ... Every single factory [and] mill that we work with, they have to meet our standards." Last June, Phi signed off on a company statement that said the group had found "two cases involving indicators of modern slavery" in its supply chain in 2020.

Without indicating the location, it said one case involved a factory where workers' wages were delayed and where a language problem prevented workers from quitting and collecting termination benefits. Another involved a factory where managers were intimidating workers, which Li & Fung confirmed via a surprise visit by a qualified independent inspector. The statement said the company worked with management to resolve both situations.

"Li & Fung is committed to progressively building a complete picture of our supply chain that identifies and prioritizes areas at risk of modern slavery," the statement said.

The statement does not refer to Xinjiang and makes few direct mentions of China. Global Brands Group, a separate listed sister company that sources clothes through Li & Fung, said in its own 2020 corporate social responsibility report that it was "aware of allegations of forced labor and the treatment of Uyghurs and other ethnic minorities" in the northwest region.

"We take the allegations seriously, and will support government engagement and collective approaches to accurately assess the problem and find constructive solutions to protect the rights of workers," it said.

Under U.S. import rules set to be tightened further in June, shipments of products with suspected links to Uyghur forced labor can be denied entry. 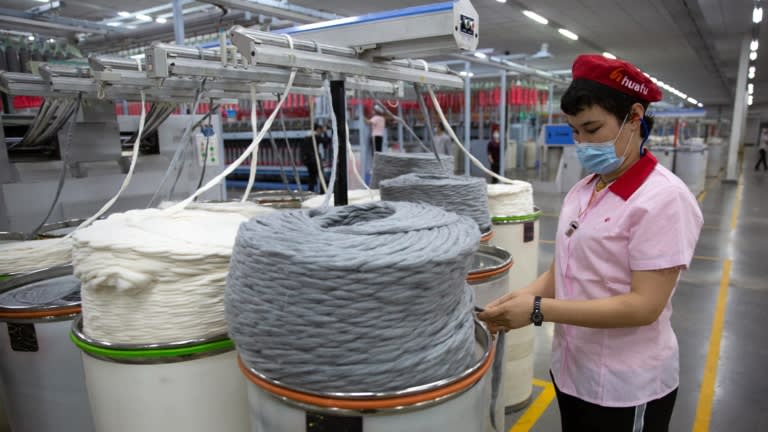 Customs agents in California last year seized a shipment of shirts headed to local shops in Japan's Uniqlo chain over such suspicions. Overall, agents seized 912 shipments in the October-December quarter over forced labor concerns, according to government figures. A unit of Esquel Group, a Hong Kong-based company making shirts for brands such as Nike and Tommy Hilfiger, was earlier added to a separate U.S. blacklist barring all trade due to forced labor suspicions.

Jewher Tohti, a Uyghur rights activist based in the U.S., questions whether companies can really determine if suppliers are involved with forced labor.

"The extreme levels of repression and surveillance in the Uyghur region means the due diligence mechanism that brands and retailers typically use to ensure that their supply chain are free from forced labor simply doesn't work in China," said the activist whose father, Ilham Tohti, is a university lecturer serving a life sentence in China for "separatism."

That deal is awaiting regulatory approvals, but it prompted a group of former small shareholders of Li & Fung to ask the Hong Kong Securities and Futures Commission to investigate whether there may have been any misrepresentations during the company's privatization, given the high price the logistics unit alone is now commanding.

Phi, who has been with Li & Fung since 1999, denies there was any deception about the potential value of LF Logistics during the privatization.

Phi said the group had taken four initiatives to cope with COVID disruptions, beginning with condensing its management structure from nine layers to five, which he said "really sped up decision making."

"The important thing here is that you need speed during this period of time when there is volatility," he said. Other moves included shifting staff closer to production, enhancing communications with stakeholders and extending the group's global sourcing network.

"Because of these four initiatives, we are well positioned: 2021 was a fantastic year for us," said Phi, without disclosing figures. "And we started 2022, despite the many challenges, on a very strong note."

He declined to reveal how many employees were dismissed during the restructuring. "As we streamline, and as we delayer, inevitably, there will be people impacted," he said. "I don't keep track of the number of people. For me, it is irrelevant, because what is relevant will be the people who stay in a company."

Against the backdrop of the strict lockdown in Shanghai, Phi noted that Li & Fung, founded in 1906, has been shifting its sourcing network further west and north from its original base in southern China, as well as directing more orders to factories in other countries.

"One thing that we have learned during the last 18 to 24 months is that we can no longer put more eggs in one basket," he said, forecasting that China's gross domestic product growth could be reduced by 2 percentage points this year due to the country's COVID outbreaks and lockdowns.

Phi is working to add another five or six countries to Li & Fung's production network, which now reaches to 50 as far off as Africa and South America. Less than half the production it manages is done in China currently, but the country will continue playing a "major role in the global supply chain," he said, given its efficient production.

The Ukraine war has spotlighted another risk factor in Li & Fung's network: the danger of transport disruption as some shipments previously traveled by rail from Chinese factories to Western Europe via Russia, a "very handy and useful" option amid problems at seaports.

"This will put more pressure into this very jammed up supply chain," Phi said.