KUALA LUMPUR -- Spending more time indoors under lockdowns, closures and other curbs might seem a natural catalyst for more sex -- and condom use -- but the world's biggest maker of the prophylactics says otherwise.

In an interview with Nikkei Asia, Goh Miah Kiat, CEO of condom giant Karex, said use of its products actually declined as much as 40% in the last two years.

The Malaysian company produces over 5.5 billion condoms annually and operates in 140 countries. Its closest competitor, Thai Nippon Rubber, churns out about 2 billion.

Amid the slack sales, Karex is taking advantage of pandemic-related health concerns to move into the booming medical glove manufacturing business, with production set to begin in Thailand by the middle of this year.

Goh, the third generation of his family to lead the once closely held but now listed contraceptive producer, said it is easy to assume that people staying home amid movement restrictions "had nothing [to do] but have sex, right?"

But the CEO said this has not been the case. He explained that in developing and less-developed countries, hotels and motels play important roles in providing secluded spaces for intimacy, given generally crowded homes where privacy is at a premium.

"[Hotel stays were] disrupted by the pandemic," he said, adding that the sex industry -- normally a major condom market -- has been far less a factor in the last two years. 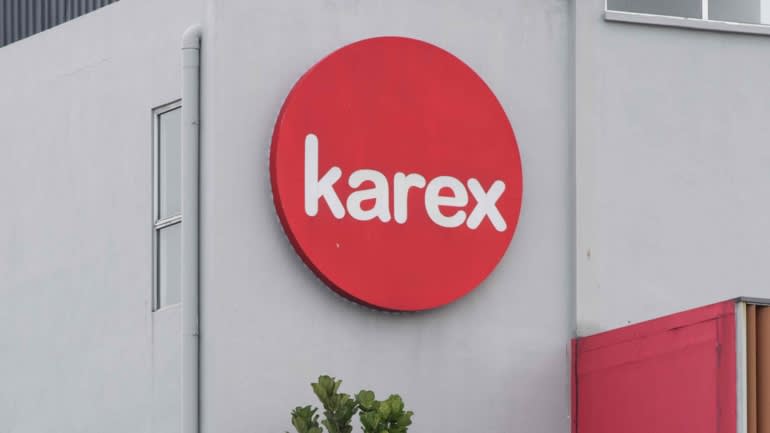 Governments suspending condom handouts have also contributed to the downturn. "A large portion [of condoms] is distributed by governments around the world, which have reduced [distribution] significantly during COVID-19," he said.

"For instance, in the United Kingdom, the NHS [National Health Service] shut down most nonessential clinics because of COVID, and sexual wellness clinics which hand out condoms were also closed."

As a result of weak demand and plant shutdowns due to lockdowns in Malaysia, Karex recorded a full-year loss for fiscal 2020 ended June -- its first since going public in November 2013. Net loss stood at 1 million ringgit ($240,000) compared with a razor-thin net profit of 228,000 ringgit the year before.

But revenue for fiscal 2020 was 6% higher from the year before at 419 million ringgit, thanks to stronger overall sales in the Americas and Asia.

According to Goh, the company witnessed an increase in sales of non-condom products, namely personal lubricants as well as probe covers for medical devices and foley balloon catheters used in transurethral drainage of the urinary bladder.

But Karex is now seeing condom sales pick up worldwide, said Goh, noting that plants in Malaysia and Thailand are running at near capacity.

Walter Aw, an analyst with CGS-CIMB Securities, said Karex could see stronger results as demand rises amid the lifting of lockdowns in Malaysia as well as relaxation of COVID-related curbs globally. "We believe that Karex will gradually hike prices to pass on higher operating costs" for raw materials and freight, he said. He noted that production is also expected to rise given the easing of lockdowns.

In contrast, Ng Chi Hoong of Affin Hwang Investment Bank said the operating environment is expected to be remain challenging for Karex even as the company expects demand to improve in the coming quarters as social activities resume.

"The current recovery mainly focuses on developed markets for both the own-brand manufacturing and the commercial segment, while demand for the tender market is likely to remain lackluster, as recent government funding remains focused on securing COVID-19 vaccines instead," said Ng. Karex is using its manufacturing expertise to move into the booming latex glove market. (Photo courtesy of Karex)

Goh said similar materials and technologies are used for making condoms and gloves but "the entry barrier to gloves is much lower."

Karex's move into the medical gloves market will see it join a long list of Malaysian companies that dominate the sector. Top Glove, Supermax and Hartalega control about three-quarters of global supply, leveraging Malaysia's role as a major rubber producer. The country exports 450,000 metric tons of natural rubber annually, ranking fourth in the world after Thailand, Indonesia and Ivory Coast.

Goh cautioned that the focus on fighting COVID-19 should not overshadow the ongoing battle against the spread of AIDS.

"We must not overlook the frightening fact that even 40 years after the first cases of AIDS were documented, the world is still reporting 1.5 million HIV infections and 680,000 deaths from AIDS-related causes per year," he said, citing data from the United Nations' Global AIDS Update.

Despite new drug treatments to fight AIDS, condoms remain vital to prevent the further spread of the sexually transmitted disease.

"It is critical that while we have managed to make strides to get control of the pandemic, we must not lose focus of the fact that condoms will still have a critical role to play as the world emerges from its fight against the COVID-19 virus," he said.

The U.N. Global AIDS Update estimated that condom use has averted 117 million new infections since 1990, with almost half in sub-Saharan Africa and over one-third in the Asia Pacific.