TOKYO -- SoftBank Group announced on July 26 that it had agreed to raise at least $108 billion for a new investment fund. Yet throughout his interview with Nikkei at SoftBank's Tokyo headquarters, Masayoshi Son, SoftBank's founder and CEO, rarely relaxed his serious expression.

Keeping up with the disruptions that artificial intelligence brings will require real concentration, he explained. "AI is already past the stage of academic research and is at the stage of real-world adoption," he said. "It will be used extensively. If I were to name three areas that will be most drastically transformed by AI in 10 years, they are corporate business models, health care and transportation."

The first Vision Fund, worth nearly $100 billion, has been making massive bets in those areas for the past two years to get ahead of the curve. Its portfolio companies include U.S. ride-hailing giant Uber Technologies, office sharing company WeWork and ByteDance, the Chinese owner of a number of popular social media apps.

"Unicorns [unlisted companies with a valuation of $1 billion or more] are being born one after another, and we can monetize the investments faster, compared with the early days of the internet," Son said. "I feel confident."

Critics call the Vision Fund a symbol of the tech bubble. But Son's faith in the potential of AI is grounded in a career spent betting on big technology trends.

"When the Internet revolution began more than 20 years ago, people asked me similar questions. But what happened in the end? The internet spread far and deep into all corners of life. The same goes for artificial intelligence. The world will not grow tired of AI.

"Those who are calling the current environment 'a bubble' and 'dangerous' are those who do not understand technology. For those of us who do, now is the entry point of the revolution and the opportunity. Some warned that the internet was 'a glass cave' during the internet revolution. They must feel embarrassed now.

"The average price-to-earning ratio of major IT companies is about 30 times. But their profits are growing by about 30% annually and the P/E ratio will fall into the teens in two years. That is similar to Japan's manufacturing sector, so you cannot say the stock price of IT companies is too expensive. In fact, it may be the manufacturing sector that is too expensive, given its low growth potential five years from now. It depends on the time frame of your assessment."

SoftBank's own stock price underscores the gap between Son's futuristic vision and the more skeptical view of the market. SoftBank's market capitalization of 12 trillion yen ($110.4 billion) is less than half the combined value of the stakes it owns in various companies, 27 trillion yen in all. 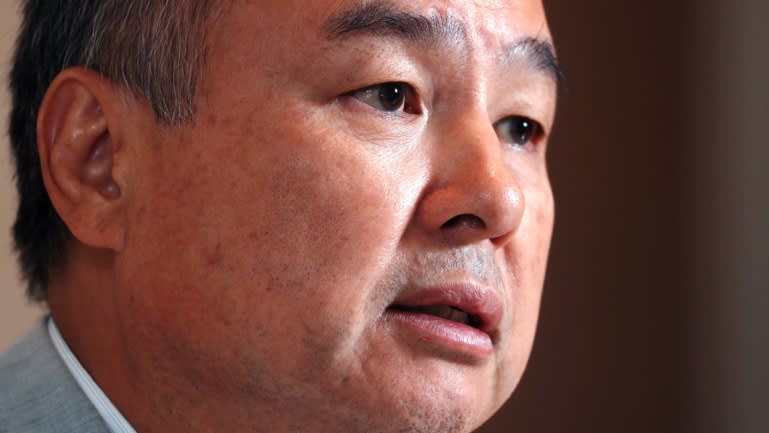 Masayoshi Son says business is much more stable compared to the days when we began Yahoo BB and acquired Vodafone's Japan unit. "I can fall sound asleep almost every night," he told Nikkei. )Photo by Kosaku Mimura)

"The market's expectations will eventually catch up to SoftBank's fundamental strength and exceed it. I am patient. Some may say that the mobile telecommunications business under the group has matured. But if the fund business succeeds and generates high returns, I think the market will be more relieved. Starting around next year, I expect initial public offerings of portfolio companies almost every month."

Successfully transforming SoftBank into an investment company will be key to ensuring its survival for 300 years -- a longtime goal of Son's.

"The Vision Fund is the basic method. It will invest in a group of companies that will lead the information revolution -- which will last for 300 years -- and become the majority shareholder. The companies will stimulate each other within the family and generate synergies. But we will let companies whose growth slows 'graduate' and bring growing companies in. That harshness allows [the group] to grow and survive."

The Vision Fund is also Son's attempt to ease concerns over the future of SoftBank after he retires. The 61-year-old has yet to name a successor.

"Once an ecosystem of a group of growth companies is established, it will continue to grow, even after I am gone. I am constantly thinking about a successor. Candidates could come up from within the company, but there is also talent among the companies that the Vision Fund portfolio invests in."

While Son's aggressive deal-making has fueled concerns about SoftBank's debt, Son says he has a set of rules to contain risk. One is keeping the group's loan-to-value ratio (LTV) below 25% of the value of the stakes that it owns, which means it can survive by selling shares, even if their value drops by three quarters. Another is keeping cash on hand equal to the value of its bonds maturing over the next two years. "At present, I am not afraid because the LTV is under 15%. We are in a comfort zone," Son said.

Analysts have said failing to receive regulatory approval of its heavily indebted U.S. mobile arm Sprint and T-Mobile will be a major blow for SoftBank. Son disagrees.

"Sprint's debt is 'nonrecourse,' which means SoftBank has no obligation to repay. If we jointly guaranteed the debt, the interest on it would be lowered. But we intentionally did not do this and chose the higher interest rate option in order to isolate us from risk. We have no plans to take on responsibility for this debt. If we did so on some sort of grounds of 'moral responsibility,' our foreign shareholders would probably file a lawsuit."

"It was extremely tough when I started Yahoo BB and acquired Vodafone's Japan unit. There were continual crises and I was on the brink. Compared to those days, things are very stable. I can fall sound asleep almost every night."

Wataru Suzuki in Tokyo contributed to this report.