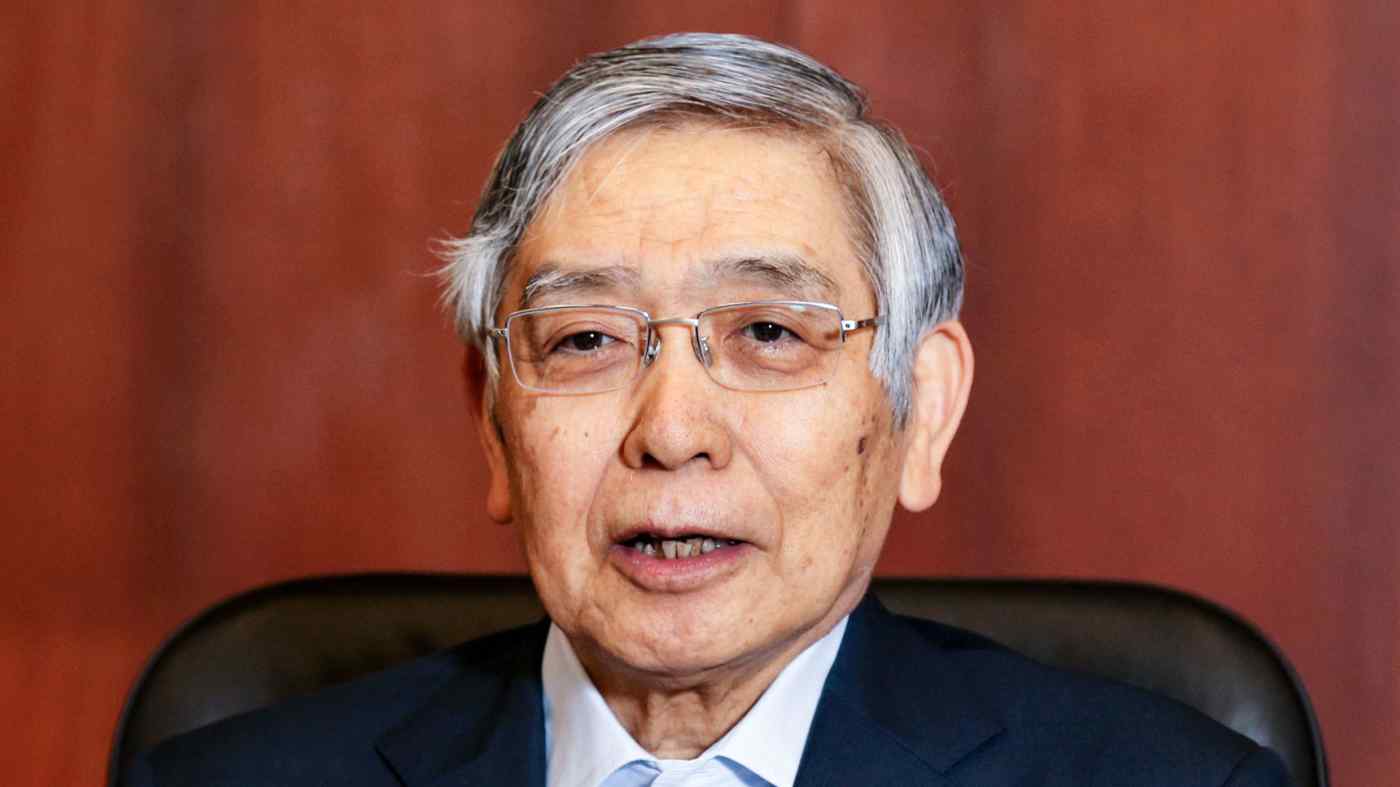 BOJ Gov. Haruhiko Kuroda admits that it is taking longer than he thought to pull Japan out of deflation. (Photo by Yo Inoue)
TAKESHI KAWANAMI, YUTA SAITO and TAKERO MINAMI, Nikkei staff writersSeptember 8, 2021 18:02 JST | Japan
CopyCopied

TOKYO -- The Bank of Japan will continue to take a persistent stance when it comes to monetary easing, even after the COVID-19 pandemic abates, until the goal of 2% inflation is reached, Gov. Haruhiko Kuroda told Nikkei in an exclusive interview.

This signals a markedly different stance from central banks in the U.S. and Europe, which have started to explore ways to reduce monetary easing.

The Japanese economy is currently facing downward pressure with a resurgence of COVID-19, both inside and outside the country. Kuroda stuck to his baseline scenario of export and production recovery, as well as consumption returning as more people get vaccinated, but added, "There is strong uncertainty regarding the impact of infections."

"We will continue our present measures of monetary easing, and help with companies' financing," he stressed. "If necessary, we are prepared to take additional easing measures without hesitation."

Major central banks believe that healthy economic growth can be obtained when prices increase by around 2% per year. Prices stubbornly refused to reach that target prior to the pandemic, but with economic activity back on track, the U.S. is seeing prices rise more than 5% annually, while the eurozone has seen historic rises of 3%.

In contrast, inflation in Japan continues to be mired in negative territory. According to the BOJ's Policy Board members' forecast, the inflation rate in fiscal 2023 will be 1%, which is far short of the 2% target. Kuroda suggested that there is a "considerable difference in the labor market" behind the inflation gap with the U.S. and Europe. He pointed out that "Japan has maintained employment during COVID, so even if consumer demand returns, it will be able to respond immediately in terms of supply." In the U.S., supply constraints such as delays in employment recovery remain, contributing to rising wages and prices.

In response to growing concerns about inflation, the U.S. Federal Reserve is considering tapering its quantitative easing policy later this year. Some central banks in other advanced economies, such as Canada, have already begun scaling back monetary easing. Kuroda emphasized that Japan's "situation is a little different from that of Europe and the U.S." He asked for the understanding of the BOJ's continued easing, saying that "it means taking appropriate monetary policy according to the economic and price conditions of each country." Exchange-traded fund purchases, which are being carried out as part of the large-scale easing effort, have been reduced as stock market sentiment turns positive.

However, Kuroda pointed out that "it is still a necessary policy" to achieve the inflation target. "We are not considering stopping buying or transferring or selling" ETFs, he said. Regarding the exit strategy from large-scale easing, including the purchase of ETFs, he only said that "it should be decided based on the situation when the 2% [inflation] target approaches."

Prime Minister Yoshihide Suga has announced that he will not run in the LDP presidential election, and there is growing interest in financial markets over fiscal stimulus by the next government. Kuroda said that fiscal policy is "decided by the government and the parliament," but added that "there is a solid system in which fiscal and monetary policy cooperate while dividing roles."

The main element of the BOJ's monetary policy is yield curve control, which maintains short-term interest rates to minus 0.1% and the yield on 10-year government bonds -- the benchmark for long-term interest rates -- to around zero. "Interest rates will stay low, even if fiscal policy becomes more aggressive," said Kuroda. The central bank's low-interest rate policy "may provide a positive environment to make fiscal policy more effective." He also acknowledged that higher interest rates are unlikely and thus would "not have a negative effect on financial markets."

Central banks around the world are also exploring the idea of issuing their own digital currencies, known as central bank digital currencies (CBDCs). The BOJ began testing its own CBDC in spring to investigate technical concerns. Along with these, Kuroda listed other CBDC issues to be discussed, including coordination with the private sector, the impact on the financial system, and privacy protections. "We are currently studying the design of the system," he said. Asked about when the BOJ will decide to issue a CBDC, Kuroda said, "We currently have no plan to issue CBDC, but we have to watch [the situation in other countries] carefully so as to be prepared."

The interview was conducted on Sept. 7 in Japanese.