WASHINGTON -- The dangers of Amazon.com's dominance are "not cognizable" if we continue to assess competition through old and outdated lenses. So wrote a Yale Law School student in 2017.

Lina Khan's paper "Amazon's Antitrust Paradox" noted in game-changing fashion that the current framework of antitrust -- which equates competition with consumer welfare and measures it through price and output -- "fails to capture the architecture of market power in the twenty-first century marketplace."

Amazon is a marketing platform, a delivery and logistics network, a payment service, a credit lender, an auction house, a major book publisher, a producer of television and films, a fashion designer, a hardware manufacturer, and a leading host of cloud server space, she wrote.

It is the center of e-commerce and essential infrastructure for a host of other businesses that depend upon it. Yet it has escaped antitrust scrutiny, she noted.

Now an associate professor of law at Columbia Law School, Khan is at the forefront of efforts to reframe the antitrust debate. Her views have gained new relevance as Google's dominance in global search and Facebook's alleged strategy of eliminating rivals have also become subjects of antitrust lawsuits.

The shift in focus in U.S. antitrust policy to consumer well-being over the past several decades "was making us blind to Amazon's power," Khan told Nikkei in a recent interview.

Her Yale paper hit a chord with those who were alarmed by Amazon's might in retail, becoming something of a "bestseller" in the world of legal articles. Khan, 31, has been described by the Financial Times as "the legal wunderkind" or "Big Tech's public enemy No. 2" -- after European Competition Commissioner Margrethe Vestager. A century ago, "antitrust, anti-monopoly, laws in the U.S. were really radical," Khan said. "They were designed to deconcentrate and to decentralize concentrated wealth and power."

In her view, Amazon has used its dominance in logistics and massive amounts of user data to crush competition, to the detriment of small businesses, entrepreneurs and society as a whole -- even if consumers ostensibly benefit from lower prices.

Khan said she hopes antitrust "is again becoming something that is more publicly talked about and people understand what monopolies are, that we have these laws against them."

Khan was raised in London by Pakistani parents, with whom she moved to the U.S. in 2000 -- not long before the terrorist attacks of Sept. 11, 2001, which fueled discrimination against Muslims and Middle Easterners.

"Coming of age after 9/11, as a Muslim, you know, our community was just under a lot of skepticism and scrutiny," she recalled. Family members "would always get pulled over at the airport" and treated like "potential terrorists," she said.

The experience made Khan politically engaged from a young age. She grew up admiring journalists who held power, both political and corporate, to account. She wrote for and ran school newspapers in high school and college, and one of her high school stories, an investigation of a nearby Starbucks that had banned students from hanging out there, was followed up on by The New York Times.

In college, Khan observed how low-income people, particularly minorities, suffered amid the global financial crisis of 2008 while the government bailed out banks. Years later, she noticed a similar dynamic in law school while doing litigation on behalf of homeowners being foreclosed on.

"That core injustice and also that abuse of power really stood out to me," she said. 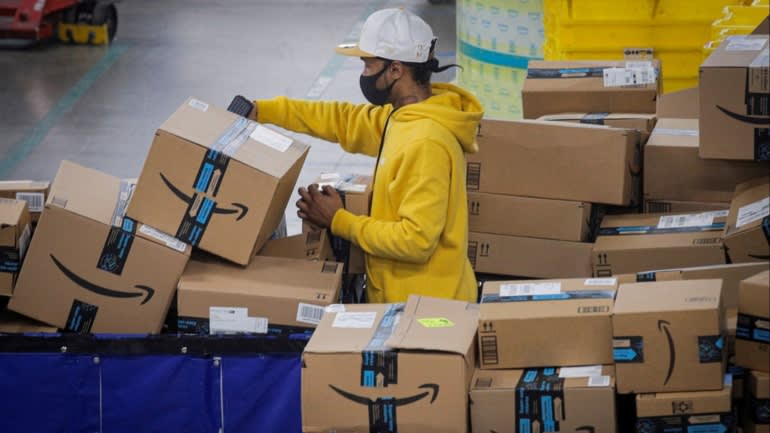 An employee scans packages at an Amazon.com distribution center in Staten Island, New York. Amazon is the center of e-commerce and essential infrastructure for a host of other businesses but has escaped antitrust scrutiny, Lina Khan notes.   © Reuters

Khan's interest in antitrust is rooted in her time at the New America Foundation, a Washington think tank she joined after graduating from Williams College. As part of her work, she studied such industries as agriculture, airlines and commodities, which involved talking to people in those fields.

"That work is what then opened my eyes to the fact that the American economy, over the last four decades, has just been relentlessly consolidating and concentrating," she said, noting "decades of unfettered mergers and acquisitions" after changes in American antitrust policies in the 1970s and '80s.

Antitrust, Khan said, used to be the "people's law," intended to protect people's rights in the marketplace but has become dominated by a handful of academics who determine the "right" way to understand it. She calls for "re-democratizing" antitrust and returning to the ideas and values formerly at the core of the field.

"And so, the fact that a hundred years later, we were living in the most unequal economy, the most concentrated economy, really led me to question ... what happened to the antitrust laws," she said.

Khan entered law school to find the answer. She drew on her journalistic experience for "Amazon's Antitrust Paradox," based on interviews of businesses that sell products on the platform as well as Amazon investors. Her time as a reporter also helped her make the piece accessible to even readers without a background in economics or law, enabling it to spread far beyond its original audience.

Listening to the experiences of those involved, rather than focusing on the theoretical models on which much antitrust work is based, enabled Khan to challenge decades of conventional wisdom.

Asked about the inspiration that many young activists are taking from the reforms of the early 20th century, Khan noted many parallels between the inequality and injustice of earlier eras and today.

"The fact that a group of reformers were able to mobilize and were able to translate a lot of frustration and a lot of suffering into political change, I think, is a big source of inspiration for me and a lot of young people," she said, citing the Black Lives Matter movement, the anti-climate-change Sunrise Movement and up-and-coming politicians like progressive standard-bearer Rep. Alexandria Ocasio-Cortez.

After serving as counsel to the House Judiciary Committee's Subcommittee on Antitrust, Commercial and Administrative Law, Khan in September joined Columbia Law. She said she is so busy that she has not had much time for photography, a hobby.

Khan said she will continue her research on antitrust issues but will also focus on "other areas of the law that help structure and 'check' corporate power," such as public utility rules and corporate charters. Khan's research has had a major impact on political heavyweights, including Sen. Elizabeth Warren, a former candidate for the Democratic presidential nomination.

"It's been exciting to see this renewed anti-monopoly movement," Khan said. "And, whether it translates into actual change, I think we are still waiting to see."

Google, Apple, Facebook and Amazon face growing headwinds in the U.S. In July, the House antitrust subcommittee summoned their CEOs for a hearing. Last week, Facebook was sued by the Federal Trade Commission and attorneys general of 48 states and territories for anti-competitive practices.

"We need to ensure the antitrust laws first written more than a century ago work in the digital age," Rep. David Cicilline, who chairs the subcommittee, said in his closing remarks. The Justice Department and the Federal Trade Commission have opened investigations into Big Tech.

There is concern that these tech giants could become even more dominant as the coronavirus outbreak accelerates the shift toward a digital society. Still, as Khan wrote in her widely read article, existing antitrust frameworks are not equipped to restrict companies that provide free or cheap services.

Research by Khan and other emerging scholars has triggered efforts worldwide for a new approach to antitrust issues. Some in Congress are now working toward updating antitrust laws, and Japan and Europe have begun cracking down on Big Tech as well.