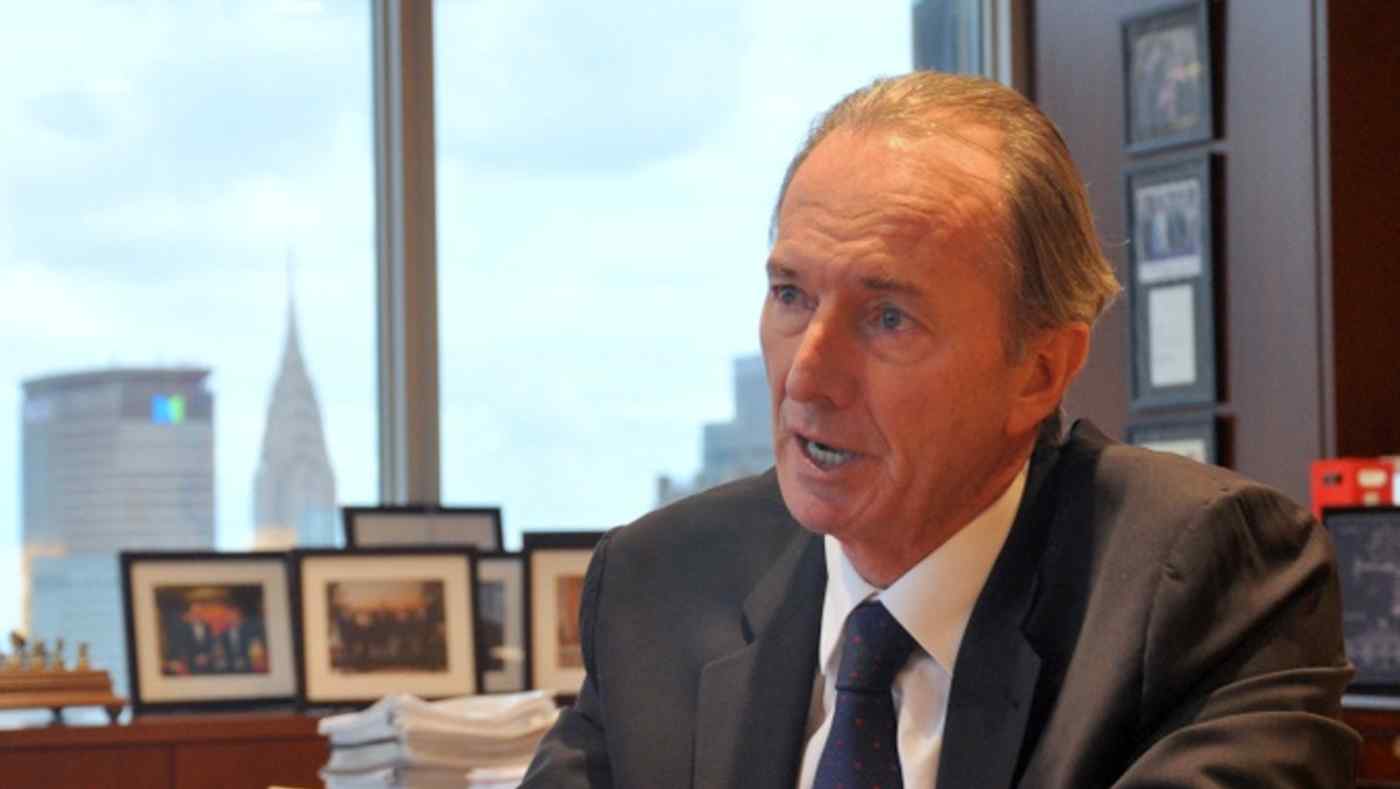 TOKYO -- With the U.S. economy starting to bounce back from a coronavirus-induced chill, Morgan Stanley Chairman and CEO James Gorman is bullish about a recovery both on Wall Street and Main Street.

In a wide-ranging remote interview with Nikkei, Gorman identified ultralow interest rates and record government stimulus as key driving forces behind the U.S. economy, and predicted that inflationary pressures could push the Federal Reserve to raise interest rates in 2022.

Asked about how Morgan Stanley's market capitalization overtook that of Goldman Sachs, he said it had worked to stabilize its earnings through acquisitions and by strengthening its capital base.

He said the investment bank would work with MUFG "for decades," including by sharing its industry-leading know-how in wealth management -- a field not traditionally considered a strength for Japan's financial institutions.

On the recent default by Archegos Capital Management, a U.S.-based family office run by billionaire Bill Hwang, Gorman dismissed speculation that the meltdown could herald a widespread financial crisis.

Q: You were chief operating officer for Morgan Stanley during the global financial crisis in 2008, which was a turning point for the financial industry. What are your reflections looking back over the last decade, including your capital alliance with Japan's Mitsubishi UFJ Financial Group?

A: The 2008 financial crisis was very damaging to Morgan Stanley and to a lot of other companies. So we had to spend a lot of the last 10 years repairing the institution, and then focusing on growth. We've been able to do that through some acquisitions with Smith Barney and then more recently with E-Trade and Eaton Vance.

But an important step was getting our capital base strengthened, and our transaction with MUFG, which has been now our long-term partner, was a very important step in this journey. I'm very proud of my association with the leadership at MUFG over the past decade. Q: Morgan Stanley's market capitalization has overtaken that of Goldman Sachs, the only other major investment bank that remains independent today. What do you think contributed to this shift?

Before the financial crisis, we were strong when the markets were strong, but we weren't stable. Now we're more stable. I think when investors see that in difficult times our company continues to perform very well, it gives them more confidence to buy our shares, and as a result our market cap is growing.

Q: Morgan Stanley logged a record net income of $11 billion in fiscal 2020. What led to your success? How did the acquisition of E-Trade last October for $13 billion and Eaton Vance this March for $7 billion contribute?

A: The firm did very well in 2020. We had a record year after having a record year in 2019, partly because all our businesses gained on our competitors in all parts of the world, whether it was equities trading or fixed income or investment banking.

So I believe the firm will be stronger in the years ahead than we were even in 2020. Q: How confident are you on the real U.S. economy going forward?

A: I'm very confident about the U.S. economy. We're in a world where we have record-low interest rates, record-high government stimulus and economic recovery across most industries.

Q: What are your thoughts on the Federal Reserve's monetary policy moving forward?

A: The Fed has been very cautious. They are more focused on unemployment than inflation at the moment. They don't think there'll be long-term inflationary pressure, but there will be [pressure] in the short term. They continue to participate in buying securities and keeping interest rates very low.

I think that must change.

There'll be some tapering, I think, toward the end of this year. My personal view is that rates are likely to rise in the early part of next year, not in 2023, which is currently the projection.

But the Federal Reserve will be driven by whatever the numbers tell them. I'm just giving you my opinion, based on what I'm seeing about the beginnings of inflation in the economy.

Q: Are you concerned about the possibility of inflation?

A: We're clearly seeing price increases. And you'll see wage inflation as companies have to pay high wages to get people back into the marketplace. You're seeing prices for goods and services going up.

So the question is: is this a short-term impact as we recover from COVID? Or is this more structural and long-term?

Increasingly, people are starting to think that it may be more structural long-term. If that's the case, the Federal Reserve will have to raise interest rates at some point.

A: It's possible. You know, the Fed's own charts would suggest the year after, but I wouldn't be surprised if it's next year.

Q: Regarding the recent Archegos meltdown, do you think it was a sign of a greater financial crisis ahead, like BNP Paribas deciding to freeze funds in 2007?

A: No, I don't think so. I think back in 2007 the fundamental problem was the housing market was dramatically overleveraged, and the banking sector was overleveraged.

So the banks are much safer. There's not as much stress in the housing market, not as much speculation. So no, I don't think it's related.

I think unfortunately this was a family office hedge fund that borrowed too much itself.

The only people who lost money was the hedge fund itself, not investors, and the banks that supported it through prime brokerage businesses. So I don't think it's a black swan. But I think the fact that the fund could have grown so quickly was a function of how aggressively some of these stocks were growing in the marketplace.

Q: Japan faces an aging and shrinking population, though it's still the world's third-largest economy and its stock market has been recovering recently. What is your long-term outlook for the country?

A: There's increasing technology in digitalization, which is making the economy more productive, which is offsetting some of the population decline.

But over the long term, you're right. You can't have a society continue to grow if the number of people in it continues to shrink. So I've long felt that part of the solution, obviously for the Japanese economy, is to have stronger immigration. You need to embrace more immigration in order to have population growth, in order to drive economic growth.

The economy and the banks are well regulated. The banks are stable. There are many, many great Japanese companies that are increasingly global. It's a very entrepreneurial society with a lot of innovation in the technology space in particular, and I think there are opportunities for growth.

Q: Your joint venture with MUFG here marked its 10th anniversary last year. What do you plan to do from here on out? Will you deepen cooperation in wealth management?

A: There are many things we're working on to transfer knowledge and try and drive our business together, and that will be an ongoing process for decades.

The Japanese clients who are clients of MUFG also have wealth management needs. And increasingly, through our joint venture, we're serving those needs.

We've seconded executives to Japan to work with our partners to try and help build the wealth management business in Japan because there's a lot of wealth among Japanese citizens.

Q: How do you see the future of the Chinese market?

A: The Chinese economy is the second-largest economy in the world. It's about $12 trillion. The U.S. economy is about $18 trillion.

We try not to engage in politics. But we have a joint venture in China called Huaxin Securities and an asset management business, and we now own a majority, [and we] would like to be at 100%.

I think it's inevitable that the superpowers will have trade friction, whether it's the European Union with the U.S., the European Union with China, the Trans-Pacific Partnership, etc. So I think we just have to work constructively, acknowledging there'll be frictions from time to time. But we continue to serve Chinese corporations and investors in China, and around the world.

Q: How will you deal with trends in technological change as well as the environmental, social and governance movement?

A: The banking industry has been dealing with technological change for many decades now.

We spend over $4 billion every year on technology, whether it's cyber protection, whether it's managing our client data, whether [it's] making our trading systems more efficient.

ESG, of course, is more recent. Morgan Stanley was at the forefront of that issue by setting up our own sustainability institute in 2013. And we have an outside board of advisers, and we're engaged in one of the first green bonds and social bonds.

We've committed to removing 50 million tons of plastic from the ocean, and we're committed to providing sustainable products for our clients to invest in.

Both of these changes will continue. [They're] very fundamental to the banking sector and something which, fortunately, Morgan Stanley is ahead of the curve on.