YANGON -- Ahead of general elections in November, new political parties are trying to woo voters away from Aung San Suu Kyi's National League for Democracy, hoping to offer the electorate a future beyond the rule of the iconic leader.

Two opposition leaders said the NLD leader had failed to deliver change and improvements they expected over the last five years, driving them away from the party to set up their own.

Thet Thet Khine, leader of the People's Pioneer Party told Nikkei, that in particular, the NLD had neglected the economy while focusing on internal strife.

"The incumbent government focuses more on the peace [process with ethnic armed groups], and thus we saw a leadership vacuum in social and economic development," she said. "Our daily basic needs must be fulfilled every day, and that is why we put development preference over peace."

She also criticized the NLD for overreliance on Sui Kyi and her close aides to make decisions, adding that her own party "believes in collective leadership." 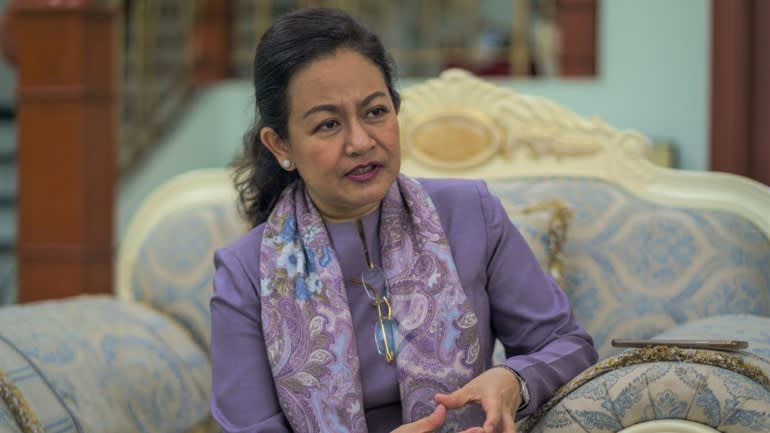 But Thet Thet Khine expects the political landscape to change significantly in the next five years. "NLD is a very 'personalistic party' [relying on] Aung San Suu Kyi, who is 75 years old. In 2025, she will turn 80, and at that time, NLD can no longer afford to be like that. NLD has to have a transition period beyond her era."

The NLD won a landslide in 2015, gaining 80% of the contested seats. Thet Thet Khine is a lower house lawmaker who won the seat as an NLD candidate in 2015, but later left the party and established PPP in 2019. The party has one seat in parliament.

Although the PPP has candidates running in more than 230 constituencies, including those contesting seats on regional assemblies, a recent survey of voters by the People's Alliance For Credible Elections, a local election watchdog, shows the NLD was still much more widely recognized than new political parties. Around 50% of those surveyed said they did not know of any new political party.

Furthermore, restrictions on campaigning due to the COVID-19 pandemic gives the NLD, which is expected to win the most number of seats in parliament, an upper hand, because the new parties will have limited opportunity to make themselves known and to showcase their policies.

As such, the PPP is looking beyond November and ahead to the general elections in 2025, when Suu Kyi may be fading away from the political limelight. Thet Thet Khine said the party views the upcoming election as a "learning process," saying "this 2020 election is the very first experience for our party and candidates."

She added: "After the election, we will be able to analyze our strength and weakness for the next upcoming election [in 2025]."

Ko Ko Gyi, head of People's Party and a prominent activist for democracy who was one of the leaders of the 1988 student uprising against General Ne Win's brutal rule, also said it was time for a change. Ko Ko Gyi, head of the People's Party, was one of the leaders of the 1988 student uprising. (Photo by Htet Aung Phyoe)

He had cooperated with Suu Kyi's NLD for a long time, but formed the PP this year. While Ko Ko Gyi did not directly criticize Suu Kyi's government, his frustration was clear.

"In the 2015 election, a lot of people voted for NLD," Ko Ko Gyi told Nikkei. "[But] the voters didn't look at the candidate, only looked at the party logo. As a result, people got frustrated about the situation.

"We expected too much from NLD and Aung San Suu Kyi for many years, without any competition, with only one leader," he said.

Until the NLD took over the government in 2016, Myanmar's politics had been dominated by the military and military-affiliated lawmakers. That influence remains; the NLD has failed to amend the constitution, which provides legal grounds for the military to interfere in politics.

Ko Ko Gyi argued that the NLD has to collaborate with the new parties and ethnic minorities. He added, "the only solution is to broaden the civilian-political arena" to make the military's influence fade away.

The PP is planning to run in over 150 constituencies. Yet its struggle against "Mother Suu," as Suu Kyi is affectionately called by her supporters, will be a tough one.

Yangon-based political analyst Khin Zaw Win sees the emergence of the new political parties as an encouraging step toward a more mature democracy despite the challenges ahead.

"A lot of people worship Suu Kyi and are addicted to her charisma," he said. "The current situation is like a one-party state. We need new faces, new voices in this [democratic] progress."